Bund yields are highly correlated with EUR/JPY on the weekly timeframe.

The European benchmark German 10-year bund yields traded above 1% on Wednesday for the first time since June 2015 as the rise in world-wide yields has finally caused Bund prices to capitulate.  Bund yields have moved aggressively from 0% in mid-March to 1%  on Wednesday.  Helping to stroke the bid in bunds were comments from ECB’s Schnabel, who said that she would be in favor of raising rates as early as July to stop extremely high inflation from becoming entrenched.  Recall that the April CPI reading released last week was 7.5% YoY, the highest reading ever, vs 7.4% YoY in March.  The ECB targets 2% inflation.

On a weekly timeframe, German bund yields broke below 0.00% in the Spring of 2019 and made an all-time low when the pandemic first began during early March 2020 at -0.908%.  Yields had been trading below 0.00% until late January 2022 when they finally spiked higher to 0.331%.  German bund yields then pulled back to test the 0.00% level and then moved aggressively higher during the week of March 7th.  They haven’t looked back since, reaching 1% on Wednesday. Horizontal resistance crosses at 1.056% from the highs of June 2015, then the 127.2% Fibonacci extension from the highs of February 2018 to the lows of March 2020, at 1.277%.  However, notice that the RSI is in overbought territory, indicating that yields may be ready for a pullback.  Support is at last week’s low of 0.77% and horizontal support at 0.331%.

Notice the correlation coefficient at the bottom panel of the chart.  This is the correlation between German bund yields and EUR/JPY.  The reading is +0.89.  Readings above +0.80 are considered strong.  Therefore, a reading of +0.89 suggests that both assets move in the same direction most of the time on the weekly timeframe 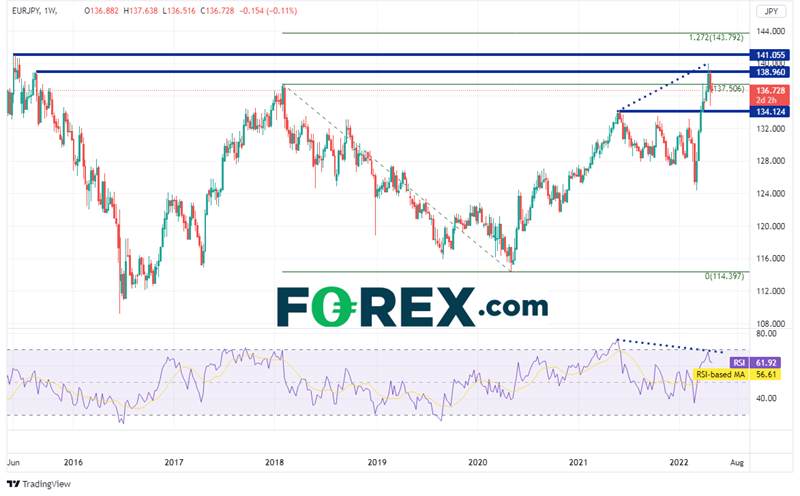 German bund yields cracked the 1% level on Wednesday for the first time since June 2015.  Will they continue higher?  Bund yields are highly correlated with EUR/JPY on the weekly timeframe.  Watching EUR/JPY may help determine the next direction for German bund yields.