Today’s big news is that large oil producer nations Russia, Saudi Arabia, Qatar and Venezuela have all reached a conditional agreement to freeze, rather than cut, their crude oil production at January levels. The news has actually disappointed the market slightly because some people had hoped to see an output cut. So, oil prices have fallen back after rising sharply during the Asian session. Nevertheless, the agreement is a step in the right direction and if other major producers follow suit then this, at the very least, should help to allow demand to catch up with supply and thus prevent oil prices from suffering further big falls. For now though, the disappointment means oil prices could fall in the short-term, which is also a bearish outcome for the stock markets after the latter enjoyed a noticeable bounce over the past couple of trading sessions. Unsurprisingly therefore, gold is back. This morning, the precious metal finds itself back above $1200, trading at a good $1213 per troy ounce at the time of this writing.

Last week saw gold surge higher as demand for safe haven assets jumped due to the tumbling stock markets. Positioning data from the CFTC confirmed this on Friday, showing that bullish bets on gold had increased sharply to a three-month high in the week to 9 February. ETF inflows have also been rising noticeably recently. So, the scope for profit-taking was considerably high and that is exactly what happened on Monday. What gold does next will depend to a great degree on the direction of the stock markets. If equities fall back sharply now that they have had a decent bounce then gold may be able to rise further. In my view, there is a good chance of this happening.

Indeed, the pullback has seemingly offered traders who missed out on the initial opportunity to go long last week to do so this morning. The precious metal has bounced strongly after finding good support from the previous resistance around the $1190/$1200 area. Going forward, this area will need to hold in order for gold to maintain its bullish bias. Thus a potential break below here would be a bearish development, which could see the metal drop back all the way to its 200-day moving average at $1130 (which also corresponds with the 61.8% Fibonacci retracement level).

On the other hand, if gold manages to break out of its long-term bear channel around the $1250 area at the second time of asking then further sharp gains could follow this week. In this scenario, the metal may at the very least go on to test the 2015 high around the $1307/8 area. But there is a potential for a more significant recovery towards the $1380 area where the 38.2% Fibonacci retracement level of the entire 2011-2015 downswing meets with the 127.2% extension of the downswing from the 2015 high. 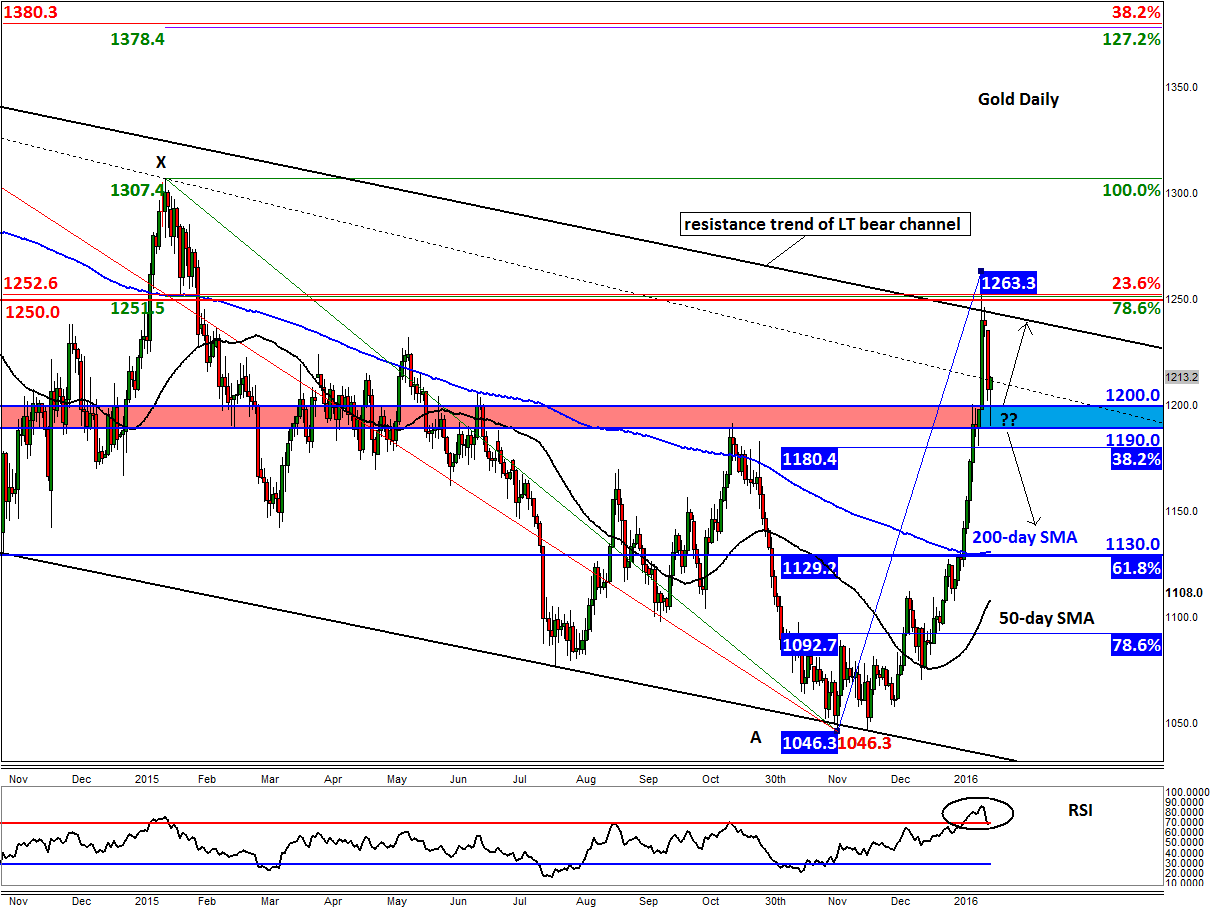