Thanks a rebound in the stock markets and the dollar index hitting its best level on the year, buck-denominated gold has fallen back over the past few days following its sizeable, but slow, recovery since hitting a low of $1160 in mid-August.

Thanks a rebound in the stock markets and the dollar index hitting its best level on the year, buck-denominated gold has fallen back over the past few days following its sizeable, but slow, recovery since hitting a low of $1160 in mid-August. The safe haven metal could potentially extend its decline in the event the dollar strengthens further this week with the nonfarm payrolls data becoming in sharp focus on Friday. The EUR/USD, for one, looks quite bearish as it teases that 1.13 handle. Meanwhile, the USD/JPY has broken a key resistance area around 112.50-90 this week and has turned positive on the year again. Given their strong negative correlation, the precious metal could drop sharply again soon should the USD/JPY embarks on another rally now.

The US dollar has been supported of late, among other things, by the release of stronger-than-expected macro data from the world’s largest economy. On Friday, for example, we saw the US third quarter GDP print 3.5% on an annualised format, beating expectations of 3.3%, while on Monday we had a stronger than expected reading on the Core PCE Price Index, rumoured to be the Fed’s favourite inflation gauge. US ADP private sectors jobs report printed a solid 227,000 reading for October today and the Employment Cost Index also came out ahead of expectations, which further strengthened the dollar.

But there could be more turns and twists for gold as market participants respond to the upcoming publications of macro pointers from the world’s largest economy this week. We will have the ISM manufacturing PMI tomorrow, followed a day later by the all-important US monthly non-farm jobs report on Friday.

Also weighing on gold is the rising bond yields, which have bounced back following their recent pullback. The benchmark US 10-year is yielding around 3.144%, not too far off this month’s earlier high at 3.250%. Rising yields erode the attractiveness of low and noninterest-bearish assets like gold and yen.

While it is difficult to see where gold might find support from, it wouldn’t come as major surprise if we see another stock market sell-off. Apple earnings could be very important to watch on Thursday, given the stock’s large weighting on the major US indices. If AAPL drops on the back of its results, this could weigh heavily on the markets, otherwise the stock market rebound could potentially turn into a full-blown rally.

Meanwhile from a technical point of view, gold is now testing support around $1205-$1213, an area which had been significant resistance in the past. It could therefore rebound here back towards short-term broken support at $1220, and if that level gives way then it could go a bit higher, potentially towards that $1238 level again. We would turn bearish on gold in the event price breaks the most recent low prior the latest rally at $1183. 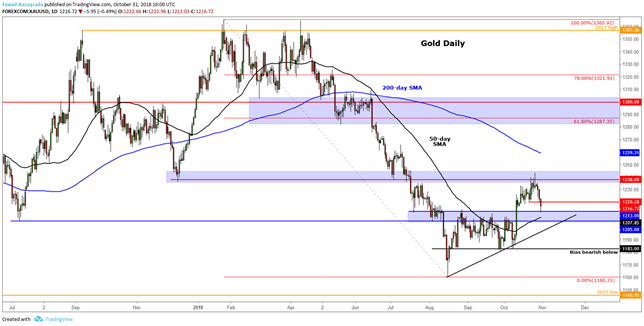