“Gold”en pennant in play for bulls

Last week, we took a look at the fundamental outlook for gold, noting that the direction of the metal is heavily dependent on changes in real interest rates and the US dollar. Today, we wanted to examine a near-term technical pattern that could help traders capitalize on an imminent breakout.

For any long-suffering Chicago Cubs fans who may have forgotten, a "pennant" is the triangular flag given to the winner of either the American or National League champion in Major League Baseball (MLB). However, the term "pennant" has a slightly different, but related, connotation in technical analysis.

When talking about price charts, a pennant refers to a pattern formed by a two converging lines or boundaries at the top or bottom of a trend. In the case of an bullish pennant, the pattern looks like a triangular flag (pennant) on top of a pole (the previous uptrend). Generally, a pennant is seen as a continuation pattern, meaning that a pennant that forms at the top of an upswing is more likely to break out to the topside and herald another leg higher.

As it turns out, that’s the exact pattern we see on gold’s 4hr chart. Since peaking near 1260 last week, gold has put in a series of higher lows and lower highs, forming a picture-perfect bullish pennant pattern centered around 1220. Now all bulls need to see is a breakout above the top of the pattern near 1225. Of course, it’s always worth keeping the longer-term perspective in mind; specifically, Gold is testing the top of a nearly 2-year bearish channel in the mid-1200s, so even if we do see a breakout from the near-term pennant pattern, bulls may want to tap the brakes as long as we’re below 1250.

Alternatively, a break below the pennant pattern (and especially the near-term bullish trend line near 1185) would suggest that the longer-term bearish channel is taking precedence and could herald a return back to the mid- or lower-1100s heading into March. Regardless of how the near-term technical situation plays out, traders will have a much better idea of what to expect moving forward by the end of the week. 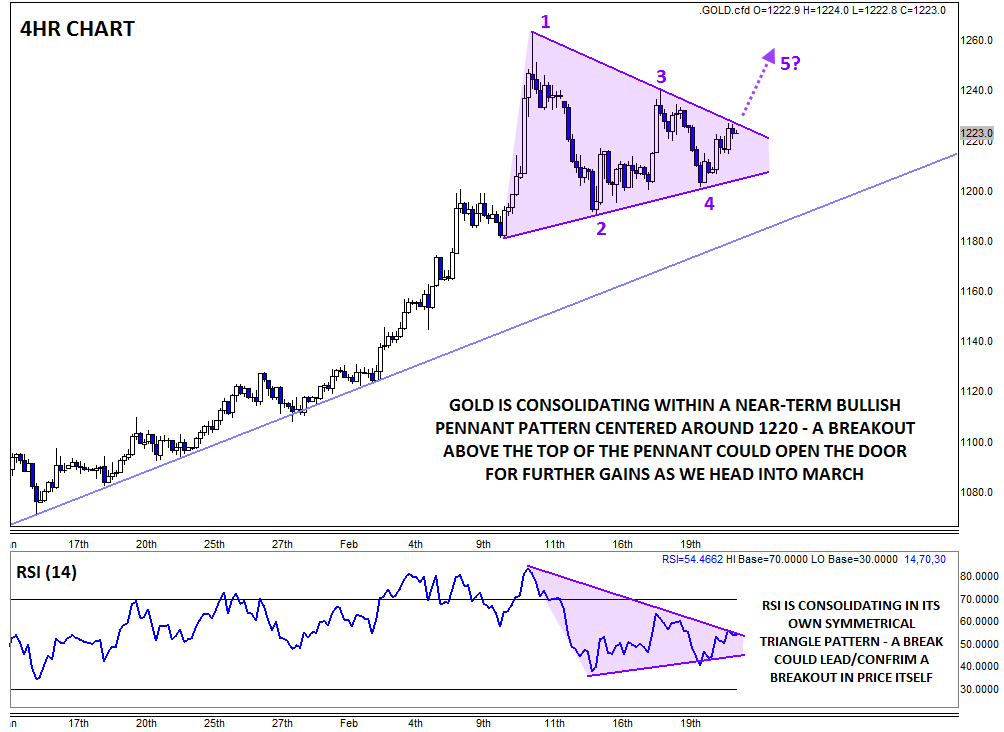