Gold has risen over the past couple of days and a bit. At $1470, the price of gold was up $25 this morning from the multi-month low it hit on Monday, before it eased back slightly. The metal has risen because of two main reasons. First, safe-haven government bonds have resumed higher, pushing yields lower. This has helped to underpin low and noninterest-bearing assets such as the Swiss franc, Japanese yen and gold. Secondly, equity markets in the US seem to have stalled for the time being after repeatedly hitting new record highs. So, what’s the common denominator behind all this and can the gains last?

Fading optimism over an imminent phase one US-China trade deal

It appears like investors have been dialling back their exposure to risky assets ever since Donald Trump delivered his trade speech a couple of days ago. When talking about tariffs over Chinese goods, Trump was unable to provide the assurances many were looking for. The US president also disappointed speculation that he was going to provide an exact date for when the two sides will sign phase one of the trade accord. What’s more, reports emerged yesterday that the US-China trade talks have hit a “snag” over the exact amount of agricultural purchases.

Aside from the ongoing US-China trade situation, gold is also supported by historically-low interest rates around the world. While some central banks have indicated a pause in their cutting cycles, no major bank is in a rush to tighten their belts. Indeed, in his testimony to Congress, Fed Chairman Jay Powell reiterated his view that monetary policy remains appropriate, even if the US economy is “the greatest,” according to Trump. With interest rates so low and QE having been re-started in by the ECB and Fed, even if the latter says otherwise, bond yields aren’t going to rise materially any time soon. 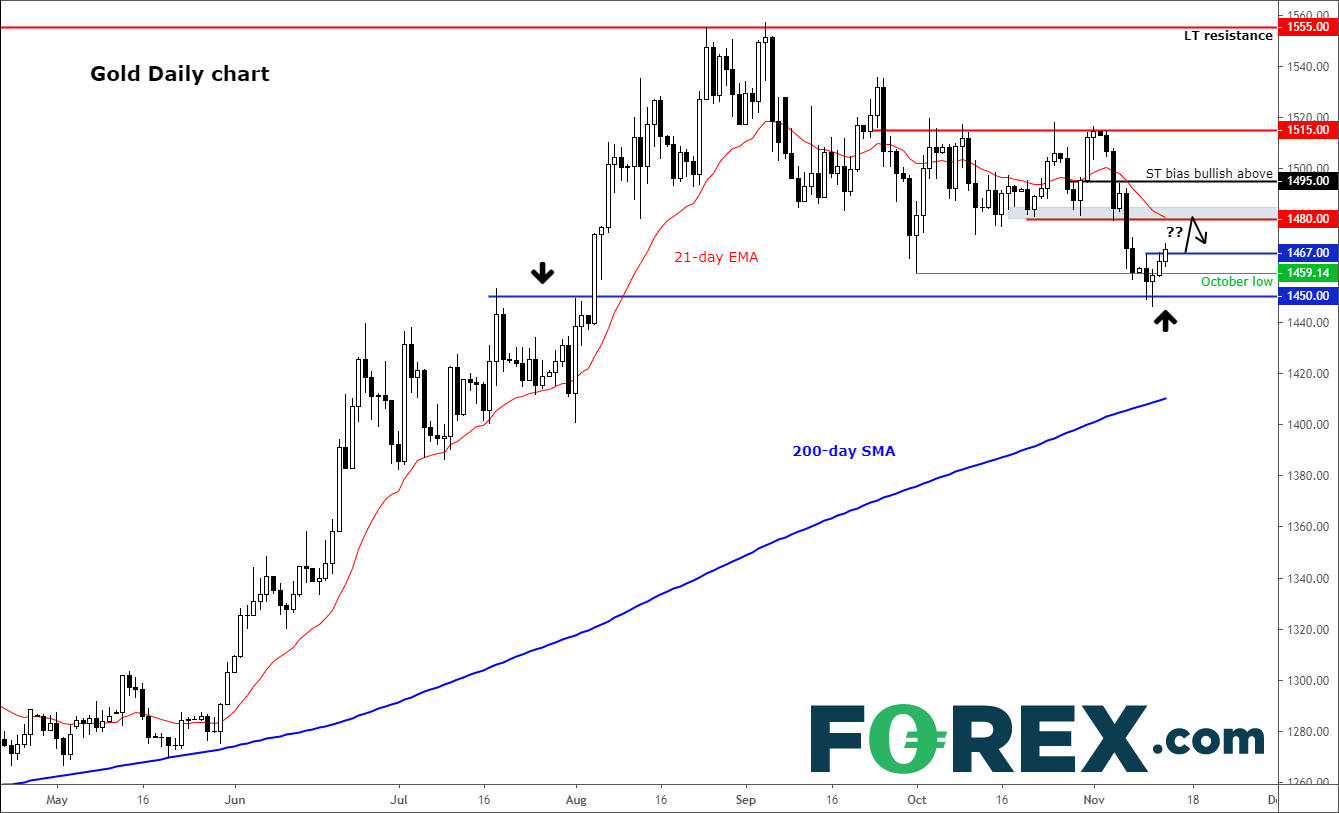 On Monday, we reported the possibility for gold to bounce back as it had dropped to the technically-important $1450 support area, in what we thought was — and still think is — a supportive fundamental environment for the precious metal. On this occasion, our prediction turned out to be correct, although it remains to be seen whether the gains can be maintained this time around. The metal has been able to rise over the last couple of days, reaching a high so far of $1470 today. The bulls now need to reclaim a few former support levels such as $1480, $1495 and ideally $1515 before the technical outlook improves markedly. But first thing is first: they need to hold today’s breakout above short-term resistance at $1467ish.

But as fundamentally bullish as we might be on gold, there is always the risk that this may turn out to be just be a technical oversold rebound, which could fade. So, we have to remain objective and open-minded until there is concentrate technical evidence that the metal has formed a low. Indeed, there is a real possibility that $1480, a key former support level, could turn into resistance upon re-test. This is the level that the bears must defend if they are to maintain control. Lose this and we could be talking about a new multi-year high soon. But if the potential retest of $1480 holds as resistance and/or gold were to go on and break $1450 key support on a daily closing basis first, then the technical bias would remain bearish.