Spot gold retreated 0.8% last week, pressured by lockdown lifts and optimism on economic restarts in major countries. However since then, it posted a three-day rebound after reaching a low near $1,671 on May 1, supported by cautions on relaxing coronavirus related restrictions prematurely and expectations that central banks would keep ultra-low interest rates for a certain period of time.

Gold has seemingly entered into a consolidation range, as investors await the U.S. ADP private jobs report due tonight (-21 million jobs in April estimated) and the non-farm payrolls this Friday. It is worth noticing that the market is already anticipating gloomy employment data, where the actual outcome may not take anyone by surprise.

From a technical point of view, spot gold maintains a modestly bullish bias as shown on the 30-minute chart. It is currently trading within a consolidation range, after a technical rebound, where a bullish RSI divergence was spotted. The level at $1,692, which is a recent turning point, may be considered as the nearest intraday support level. A break above the nearest resistance at $1,714 would be needed for gold to gather more upside momentum and open a path to $1,730. In an alternative scenario, losing $1,692 may trigger a pull-back to $1,682 and $1,671 on the downside. 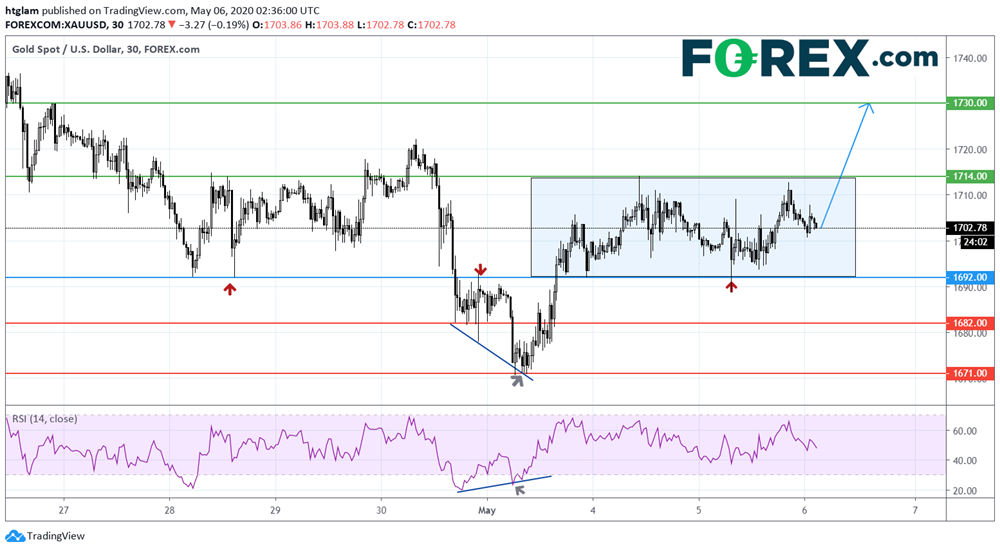 For the longer-term as shown on the daily chart, spot gold is holding up well after surging past its prior high. Despite a modest pull-back, the previous resistance level now acts as a support, which were tested several times. It is now trading within a symmetrical triangle, following a rally previously. Bullish investors might consider $1,655 as the nearest support, with potential upside targets at $1,748 and $1,790. Alternatively, a break below $1,655 may suggest gold is heading back to $1,610 and $1,575.