Was that it, then? At the time of this writing, global stock indices are sharply higher while perceived safe haven government bond prices, Swiss franc and Japanese yen are all weaker as we begin a busy new week. Gold is off its lows and silver has turned flat after a weaker open.

Was that it, then? At the time of this writing, global stock indices are sharply higher while perceived safe haven government bond prices, Swiss franc and Japanese yen are all weaker as we begin a busy new week. Gold is off its lows and silver has turned flat after a weaker open. Sentiment has improved after a couple of US officials played down risks of military conflict with North Korea at weakened, while there was no fresh war of words from either Donald Trump or Kim Jong-un. But things could escalate quickly again, especially given the planned US and South Korean joint military exercises in the region next week. So it remains to be seen whether the equity market gains can be sustained, even if things looks quite calm again. Despite the stock market rebound, gold and silver were only modestly lower today as they continue to benefit from a still weak US dollar. If recent price action on gold is anything to go by then we may see a rise in risk aversion anyway because the metal still appears poised for a potential bullish breakout above $1295 resistance soon. Although it is not unheard of, stocks and gold typically do not go in the same direction. Gold’s ascend therefore could represent rising investor anxiety as the stock market bubble grows. That being said, the bubble could turn into a balloon before it pops. So there’s a possibility that stocks could rise further regardless of what gold does in the short term.

So far this year, gold’s advance has continually been rejected around the $1295 resistance area. But after the June sell-off, there was very little follow-through in July and so far in August the metal has continued to push higher. So, with gold refusing to go down despite a still positive equity market environment, any wobble in the stock markets may be all it is needed to push gold decidedly above that $1295 hurdle. If and when gold does break through this level then we may see some significant follow-up technical buying pressure, for then the bears will have little or no reason to stand on the way.  For now, there is still hope for the bears as despite the break of the long-term bearish trend, gold is yet to make a higher high. But there are now lots of support levels that the sellers will need to reclaim if they are to exert any real pressure on goal again. Indeed, after Friday’s low around $1281.5 was temporarily broken earlier, there has been no follow-through on the downside so far. If the metal ends today’s session well above Friday’s low then this would be bullish as it would suggest that the breakout sellers were trapped once again. The market may then go to levels where the sellers’ stop loss orders will be resting: the most obvious location would be above that double top at $1295. 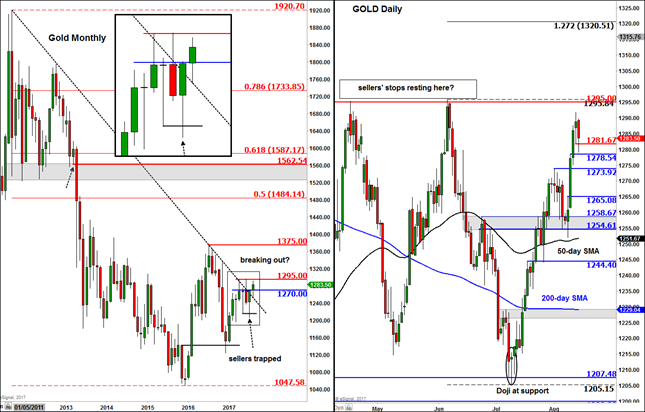