Prior to the European Central Bank’s press conference earlier today, many people were expecting ECB President Mario Draghi to talk down the euro. He didn’t. In fact, his comments were quite optimistic and this helped to underpin the euro, lifting the main EUR/USD exchange rate to above 1.25. As the euro rose, the German DAX and other European stocks indices started to head lower. This is because a stronger exchange rate is expected to hurt exports and company earnings. In contrast, US index futures hit new record highs. Buck-denominated gold was thus able to hold its own above the 2017 high of $1357 that it had broken just yesterday, although the rally in US stock indices kept the gains in check for the safe haven metal. Still, as things stand, gold looks set to extend its gains further – unless there is a sudden jump in US dollar, which looks unlikely at the moment. The dollar may make a comeback tomorrow should US GDP beat expectations. Even so, it would take a brave man to call it a bottom. If gold manages to hold above the $1357 level now then the next objective would be the 2016 high of $1375, above which are two Fibonacci extension levels at $1377 and $1390. On the downside, support comes in at $1354, but if this level breaks then there’s nothing significant until $1342/44 area. 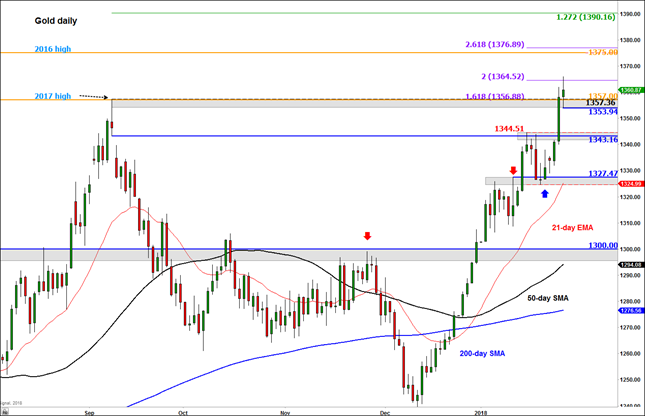