After surging sharply higher Tuesday on the back of Fed Chair Janet Yellen’s dovish remarks, gold is trading a touch weaker today. Speculators are probably booking profit on their long positions ahead of the release of some key U.S. economic data this week, starting with the ADP non-farm employment report this afternoon. Dovish Fed statements, like those from Janet Yellen, generally underpin the price of gold. As gold is a non-interest-bearing asset, falling interest rates – or expectations thereof – reduce the opportunity cost of gold ownership. In addition, lower U.S. interest rates (or falling expectations about further rate rises) generally lead to a corresponding fall in demand for the dollar. Since gold is denominated in dollars, there is an inverse correlation between the two assets. Therefore, a lower dollar typically leads to a higher price for gold. But it is not as simple as that. Dovish Fed statements also tend to underpin riskier assets such as equities which reduce the appeal of safe haven assets like gold.

Therefore, for gold to rise substantially not only do we need to see a significantly weaker dollar and dovish comments from the Fed and indeed other major central banks, but also a "risk off" trading environment. What could cause the dollar to weaken further? Well, there’s plenty of top-tier US macro data this week that could disappoint expectations, including the ADP employment report today and the official jobs data on Friday. Sentiment towards risk could turn really sour if these figures massively undershoot expectations. In addition, oil prices could fall back if today’s official US crude inventories data show another big build, while China could add to the mix later this week if its latest manufacturing PMI figures point to continued weakness in the world’s second largest economy.

So, gold prices may well be very volatile this week and for that reason traders should remain very nimble. From a technical point of view, the precious metal continues to remain trapped below a short-term bearish trend line despite its sharp rally yesterday. It has also completed a bearish engulfing candle on the 4-hour time frame today, which points to further weakness in the short-term outlook. While gold holds below the bearish trend line, I wouldn’t rule out the possibility for a sharper pullback towards short-term supports at $1228, $1222 or $1208, before the metal makes its next move. Indeed, it is possible gold may even drop to its longer-term support area between $1190 and $1200, before bouncing back. However, a potential break above the bearish trend line, which comes in around the $1243 area, could pave the way for further short-term follow-up technical buying. In this potential scenario, the bulls may aim for the 61.8% Fibonacci retracement against the recent highs, at $1254/55, as their next immediate target. The 78.6 and 100 per cent retracement levels come in at $1267/8 and $1283/4, respectively; these would be the next bullish targets. 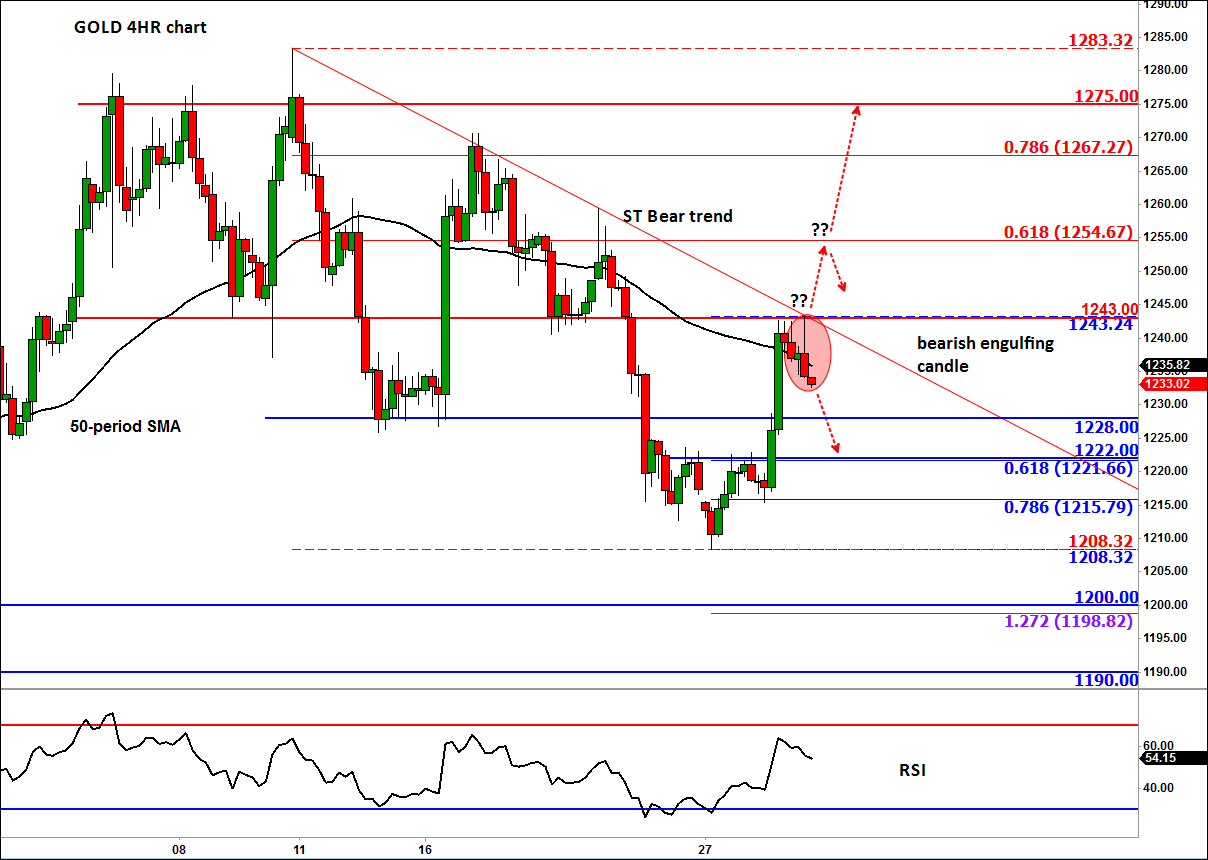