Precious metals have been big victims of the Trump- and now Fed-inspired dollar rally, especially gold. Silver has only just made a lower low relative to last month’s $16.15/20 print, whereas gold is fast approaching its 2015 lows.

Precious metals have been big victims of the Trump- and now Fed-inspired dollar rally, especially gold. Silver has only just made a lower low relative to last month’s $16.15/20 print, whereas gold is fast approaching its 2015 lows. Thus precious metal bulls may be better off with silver once a bottom is formed, although this could take a while. Conversely, the bears may be better off with gold. Unlike gold, silver has dual usages as both a precious metal and an industrial material, so it tends to do better than the yellow metal when base metals are rising. For now though, both metals are falling and risk sentiment appears be quite positive despite the rising yields and dollar. So far, no one is paying much attention to gold as a hedge against inflation. But this could be something that could help limit the losses for the metal in the coming months.

From a technical perspective, there’s not many positive things we could say about gold, except that even on the weekly time frame it looks a little bit oversold (see the RSI). The good news is the metal is fast approaching some key support levels around the $1089-$1108 area, which was previously resistance. The bad news is we don’t know if this support area will hold and if it does, for how long. Until there is a break in market structure of lower lows and lower highs, the path of least resistance remains to the downside. We never recommend catching falling knives, unless it is a counter trend move. 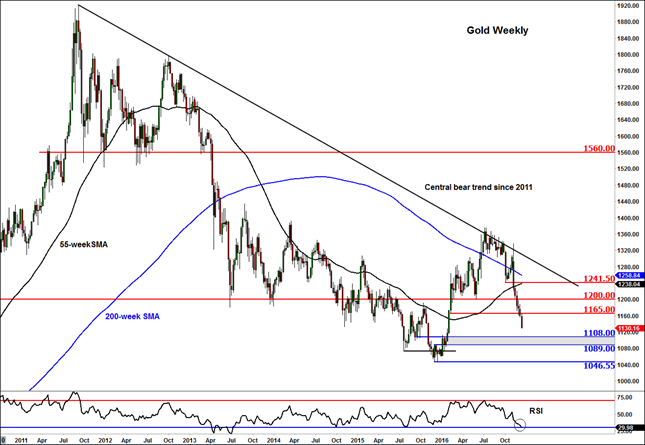