Gold’s stay above $1300 could be short-lived

Will the Fed prepare the market for a December lift off?

With US presidential election being just five days away, the Federal Reserve will almost certainly want to keep a low profile at the conclusion of the FOMC’s two-day meeting later on. Virtually no one is expecting to see a rate rise and there won’t be a press conference from Fed’s Chair Janet Yellen either. Instead, the focus will be on the wording of the policy statement and investors will be looking for clues about the prospects of a December rate hike. Up until the end of last week, the market appeared almost certain that a rate rise in December was inevitable. However, that changed as the FBI probe into Hillary Clinton’s emails increased uncertainty about the outcome of the elections. Those who were long the US dollar and equities saw this as an opportunity to take profit on their positions, especially considering the high-impact fundamental events of this week: the FOMC rate decision and US non-farm jobs report, among others. As the dollar and stocks went down, up went dollar-denominated and perceived safe-haven gold and silver.

But is the dollar selling justified? I think to some degree, yes. No one can be certain about the outcome of the US elections and then the Fed’s possible response. Also, what if US data from now until the Fed’s December meeting turn really negative? Surely if that were to happen, the Fed may well hold off raising rates until again next year. Also, when paired against other currencies, the dollar’s short-term weakness makes more sense. For example, the fact that the Reserve Bank of Australia was deemed a lot less dovish this week has supported the AUD/USD, while the NZD/USD has been underpinned by strong employment figures in New Zealand and a rebound in dairy prices. What’s more, the overreaction in the GBP selling due to the impact of Brexit has supported the GBP/USD in recent days, while the USD/JPY has been undermined by safe-haven flows into the yen. So, when you look at the dollar in that sense then you can understand why it has been sold.

Dollar could make a dramatic return

However, the underlying fundamental strength of the dollar means any short-term weakness will likely be faded into by large institutional investors and hedge funds, those responsible for basically moving the markets. After all, the Fed remains the only major central bank looking to increase rates while the rest are still pretty much dovish across the board and will likely remain that way for the foreseeable future, especially in the case of the Bank of England and the Bank of Japan. Thus, in my view, the dollar could go higher, much higher, over the long term outlook.

Gold’s advance could get rejected at this $1300 critical juncture

The $1300/08 area for gold represents a major technical resistance zone. Previously, dips were bought here; now rips could be sold here. Time will tell. The 50-day moving average, which is now pointing lower, also comes into play in this area, as does the 61.8% Fibonacci retracement level against the most recent high. There is a potential therefore for the sellers to return here and push gold back down towards the previous support at $1277 and potentially beyond. On the other hand, if the sellers do not show up here in a meaningful way then a continuation towards $1321 could be the outcome: here the 78.6% Fibonacci level converges with the bearish trend line. 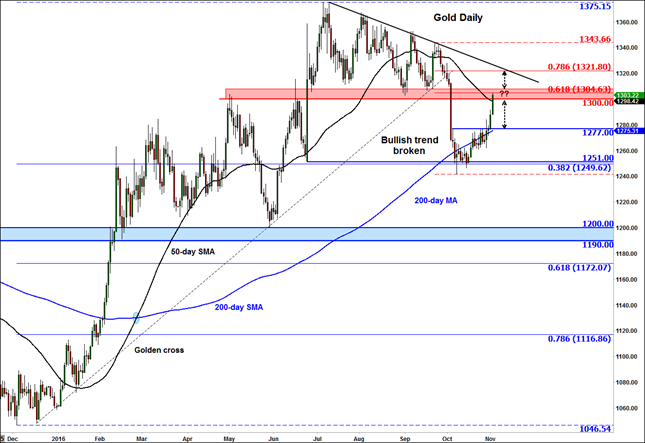