Gold struggles to shine ahead of central bank decisions

Share:
The Bank of Japan (BoJ) and US Federal Reserve are slated to reveal their monetary policy decisions on Wednesday. Meanwhile, the price of gold has been under consistent pressure in the past several weeks as its safe haven appeal has eroded in the face of relatively well-supported global markets. Despite this pressure, the upcoming central bank decisions could make a significantly positive impact on the price of gold, particularly if a dovish-talking Fed refrains from raising rates, as widely expected, and the US dollar drops as a result. In addition, any more BoJ easing further into negative rate territory could also help to support gold.

Against this backdrop, the price of gold has dropped to a key support level at a major rising trend line that extends back from the $1050-area multi-year lows of late last year. This trend line has been tested and respected on several occasions, providing strength to gold’s uptrend of the past nine months. As of Tuesday, price has tentatively turned back to the upside from this trend line support after a week and a half of falling sharply.

Could Wednesday’s central bank decisions serve as catalysts for a rebound off support for gold and a continuation of the entrenched uptrend? Most importantly, this would likely be contingent upon the Fed refraining from raising rates as well as taking on a more dovish-than-expected tone, which, in turn, should place some immediate pressure on the US dollar. If this occurs, there could likely be a gold rebound off trend line support, with the next major upside targets at the $1350 and $1375 resistance areas. In the event of more hawkish-than-expected talk from the Fed, however, a gold breakdown below the support trend line could occur, in which case the next major support area to the downside is around the $1250 level. 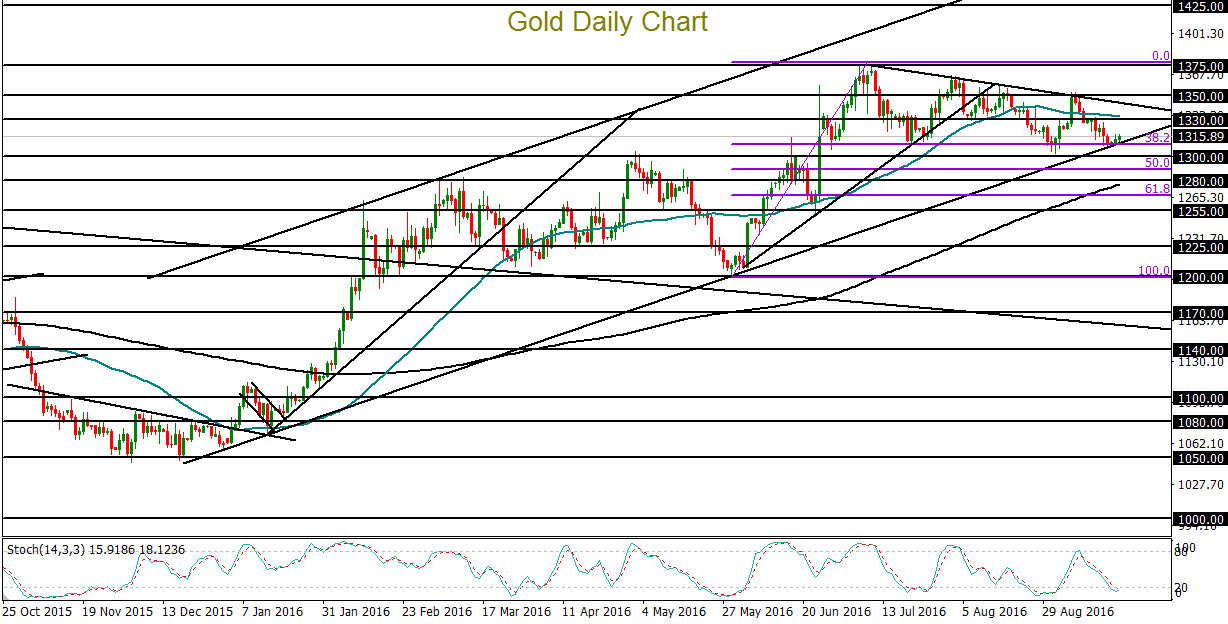