Gold to remain supported as focus turns to Frexit from Brexit

Today's triggering of Brexit Article 50 by the UK government was expected and as such it didn’t come as surprise to investors. Consequently, the markets hardly reacted to the news. However, if negotiations start going bad then that may trigger a risk off response at some point. As well as a drop in the pound, safe haven gold could surge higher, possibly similar to how it responded in reaction to the Brexit vote back in June. But that is a worry for another day. The focus will now turn from Brexit to a potential Frexit with upcoming French elections in April. In the event support for Marine Le Pen – the leader of the far right-wing National Front party – increases, so too will anxiety among market participants. Given this uncertainty, gold is likely to remain supported ahead of the elections due to its status as a safe haven commodity. But in the last few days, the yellow precious metal has struggled to further extend its recent advance. Part of the reason for this has been the US dollar, which has bounced back sharply as we had anticipated that it might at the start of the week. The greenback has been supported by further improvement in US economic data, with consumer confidence climbing in March to its highest level in over 16 years. The firmer greenback has undermined buck-denominated precious metals. But it remains to be seen whether this was just an oversold bounce for the dollar, or perhaps the resumption of its long-term uptrend.

Gold has also been capped by its technically-important 200-day moving average, which comes in at just shy of $1259. If this level were to break then we could see the start of a move towards the next potential resistance at $1265, followed by the next bullish objective at $1269/$1270, which corresponds with the 61.8% Fibonacci retracement level against last year’s high. But if Brexit negotiations were to turn ugly and/or stock markets tumbled for whatever reason then gold could easily make its way towards last year's high at $1375. Meanwhile a potential break below short-term support at $1240/41 would be seen as a bearish move. Were this to happen, a drop to the 50-day moving average at $1227 or the support trend of the bullish channel, currently at $1211, would become likely. 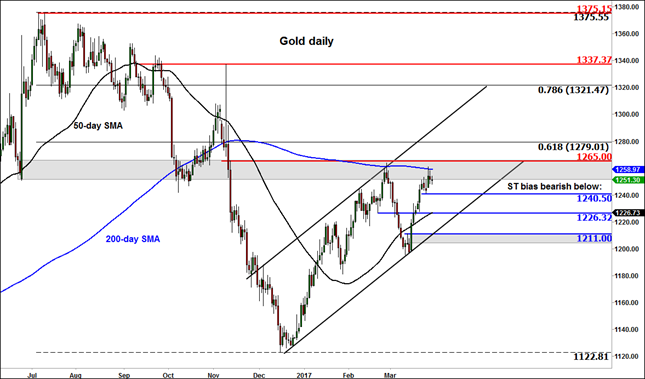