The brief but sharp drop in equity markets caused safe-haven gold to bounce back this afternoon. Stocks dropped after Donald Trump’s oldest son released an email chain showing him discussing plans to hear damaging information on Hillary Clinton from the Russian government.

The brief but sharp drop in equity markets caused safe-haven gold to bounce back this afternoon. Stocks dropped after Donald Trump’s oldest son released an email chain showing him discussing plans to hear damaging information on Hillary Clinton from the Russian government. Markets are worried that this may have influenced last year’s US presidential elections, and could put question marks over Trump’s presidency. If stocks start a meltdown now, then gold could back strongly.

The precious metal is finding additional support from a weaker dollar. The EUR/USD has broken above 1.14 resistance while the USD/JPY has started to ease back following its recent rally. The dollar is holding its own well against other currencies however, including GBP, NZD and CHF. But the euro and yen strength have caused the Dollar Index to turn lower.

The precious metal actually formed a doji candle right at $1207.50 support level yesterday. This level was the last resistance prior to the breakout in mid-March. If gold manages to rise and hold above the key short-term resistance area at $1215/18 then we could see the unwinding of the short positions and thus a short-squeeze rally. However if support at $1207.5 gives way on a daily closing basis then this would invalidate the bullish view. 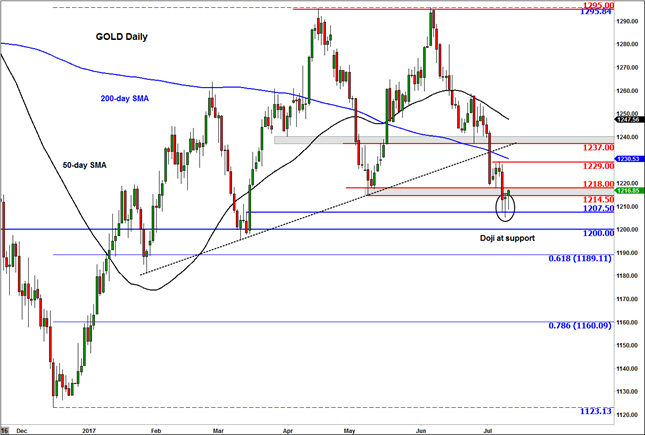