Though European markets opened firmer, the momentum faded by mind-morning and US index futures lost some ground, leading to a weaker open on Wall Street, which in turn caused gold to turn positive on the day.

The new week started positively for the US dollar and equity markets overnight, causing the buck-denominated gold to fall further out of favour. Japan’s Nikkei set a new record of rising for 15 consecutive sessions and this helped to push the positively-correlating USD/JPY pair to its highest level since 11th July. Investors welcomed Sunday’s victory for Shinzo Abe’s ruling Liberal Democratic party-led coalition. The positive outcome of the snap election will give Mr Abe a fresh mandate for “Abenomics” as he seeks to end years of deflation threatening the Japanese economy. Though European markets opened firmer, too, the momentum faded by mind-morning and US index futures lost some ground, leading to a weaker open on Wall Street, which in turn caused gold to turn positive on the day. But it is a big week for US earnings with approximately 1/3 of the S&P 500 companies set to report their results. Thus, the weakness at the start of today’s US session can be attributed to profit-taking ahead of those earning results. Indeed, generally speaking, risk sentiment remains positive due to the lack of significantly bearish macro factors at the moment combined with a growing global economy, fuelled by historically low interest rates and with many major central banks still engaged in quantitative easing programmes. Investors’ insatiable appetite for risk is remarkable given the extent of the ongoing rally on Wall Street and, as mentioned, the Nikkei’s recent run. While Q3 earning results may cause some volatility for individual stocks, the wider stock market rally may remain intact. In fact, with some European indices now starting to join the fun, it is anyone’s guess how high the markets could go before we see any meaningful correction. As a result, safe haven gold could remain out of favour despite its small recovery. We expect the metal to drift lower in the coming days, unless key resistance around the $1295-$1300 area gives way first, in which case out bearish view would be invalidated. A return to the bottom of the channel around $1250 would not come as major surprise to us. 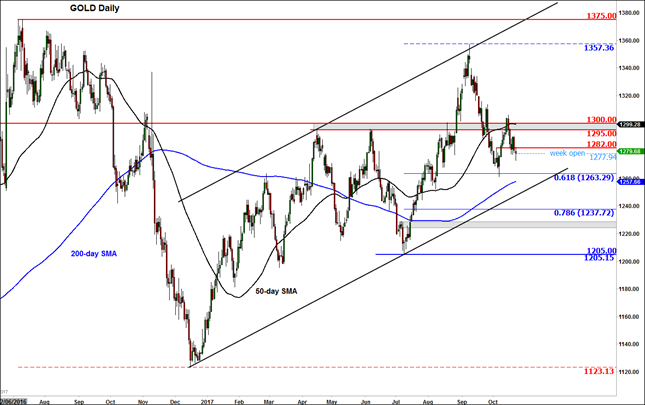