GBP/JPY in focus amid Brexit talks and data next week

As we approach the end of the week, a sense of calmness could be felt across the markets. But looks can be deceiving and things could turn volatile again very quickly, so don’t take anything for granted.

The stock markets remained on the edge this week as bond yields eased slightly while the dollar bounced back. As we approach the end of the week, a sense of calmness could be felt across the markets. But looks can be deceiving and things could turn volatile again very quickly, so don’t take anything for granted. Meanwhile in the UK, Prime Minister Theresa May is expected to unveil more details of the Government’s Brexit vision as she is due to speak about Britain's post-Brexit relationship with the European Union, in London on Friday. The negotiations will restart on Monday and the main talking points would centre on the transition period. So, the GBP could remain under pressure amid political uncertainty after having made back a big chunk of its post Brexit losses in recent months.

Meanwhile, the Japanese yen, which outperformed this week, could rise further in the event of further stock market volatility boosting its safe haven appeal. Yen has been supported further by positive Japanese data, with Inflation finally responding to years of zero interest rates and QE. If it rises further then the market may start pricing in the prospects of tighter monetary conditions there. This could further support the yen recovery.

In fact, there’s plenty of data from both Japan and the UK coming up next week, which should provide some short-term direction for the GBP/JPY. From Japan, we will have industrial production, retail sales, capital spending, consumer confidence, household spending, unemployment rate and Tokyo core CPI. From the UK, next week’s key data will include the latest manufacturing and construction PMIs.

So, heading into the new week, our featured chart to watch is the GBP/JPY. The Guppy is one of our favourite non-dollar currency pairs because it tends to be one of the most technically-friendly markets. And so it has proved again. After creating a false break above old resistance at 156.00, the volatile currency pair has dropped sharply. Recently it has broken below the pivotal 150.20 level, which was the base of the latest failed rally. Once support, this level has now turned into resistance. In fact, it is a band of resistance between 150.20 and 150.95 that we need to watch and for as long as price holds below here, the path of least resistance would remain to the downside.

However, price is now approaching a significant zone of support…but I wonder whether the buyers will be able to defend their ground here. As per the chart, the area between 147 and 148 is where several technical factors converge. As well as previous support and resistance, we have a long-term bullish trend line meet the 20-day moving average here. Thus, if the buyers fail to defend this area then we could potentially see a significant drop in the coming days, with the next key support being all the way down at 142.50. 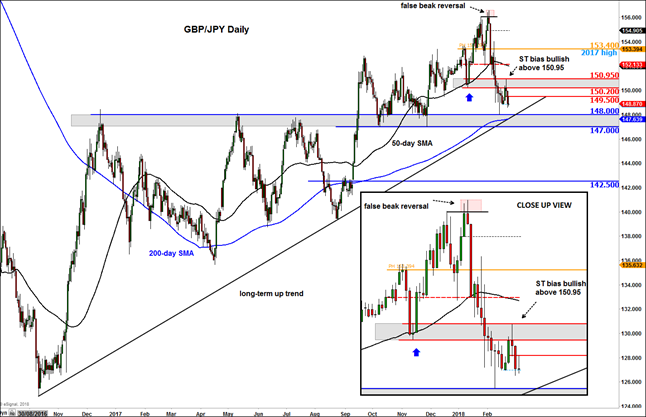