Has NZD/USD topped out?

The NZD/USD failed to maintain its early gains and turned sharply lower on Thursday. The sell-off came despite news that inflation in New Zealand had risen by a bigger-than-expected 0.4% in the fourth quarter versus 0.3% expected.

The NZD/USD failed to maintain its early gains and turned sharply lower on Thursday. The sell-off came despite news that inflation in New Zealand had risen by a bigger-than-expected 0.4% in the fourth quarter versus 0.3% expected. On top of this, the latest economic pointers from the US, including jobless claims and new home sales, disappointed expectations on Thursday. Though there are no further data scheduled from NZ tonight, there is an important piece of data to look forward to from the US tomorrow: GDP. The world’s largest economy is expected to have grown 2.1% in the fourth quarter on an annualised basis versus 3.5% in Q3. If the actual number turns out to be better, then this could spark further dollar buying interest, potentially resulting in sell-off for the NZD/USD.

When price fails to respond in the way you would reasonably expect it to is usually a sign that the trend may be about to change. For the kiwi, it was the lack of a positive response to the inflation data that has me thinking that it may be about to turn sharply lower again. Interestingly, the NZD/USD reached a technical resistance level at 0.7310 overnight before heading lower. As can be seen, this level converges with several factors, namely (1) the backside of the broken bullish trend line, (2) the underside of the bearish trend line and (3) previous support and resistance level. For the sellers to take full control of the kiwi again they will need to reclaim the broken resistance at 0.7225 now, ideally on a daily closing basis tough we may see a bounce from this level as traders take profit on their bearish positions today. In any case, a sustained break below 0.7225 support would potentially pave the way for a move back towards 0.7000 support, with the 50- and 200-day moving averages being additional bearish targets in the interim. Alternatively, if support at 0.7225 holds and the kiwi eventually breaks through resistance at 0.7310, then price may go on to test prior reference points at 0.7400 or 0.7485 before deciding on its next move. 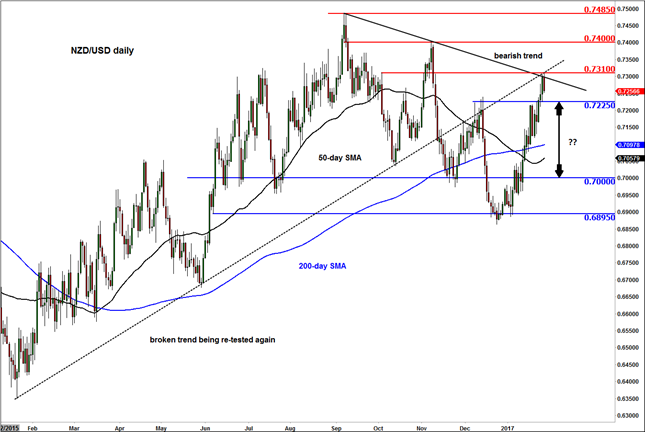