Interest Rates During the 2020 Election Year

What happens to interest rates during an election year? History tells us the Fed's response to the election may vary depending on the elected candidate.

What Happens to Interest Rates During an Election Year?

As the US presidential election approaches, creating the usual economic uncertainty, the country is also in the throes of an unprecedented pandemic. With all this happening at once, readers must be wondering: What will happen to interest rates during this election year?

Election years often lead to unexpected outcomes in the economy even in the best of times. As a result the Federal Reserve (the Fed), the independent United States central banking system responsible for conducting the nation’s monetary policy, faces the choice of how to manage the economy without the appearance of partisanship.

For the uninitiated, a key component of any monetary policy is short-term interest rates. The Fed exists to maintain a stable and growing economy through price stability and full employment. It does this by determining the short-term interest rates and  engaging in open market operations (OMO). Historically, increasing interest rates are a tool the Fed uses to discourage borrowing in order to slow economic growth and inflation, which is why any rate change in an election year can appear particularly partisan. 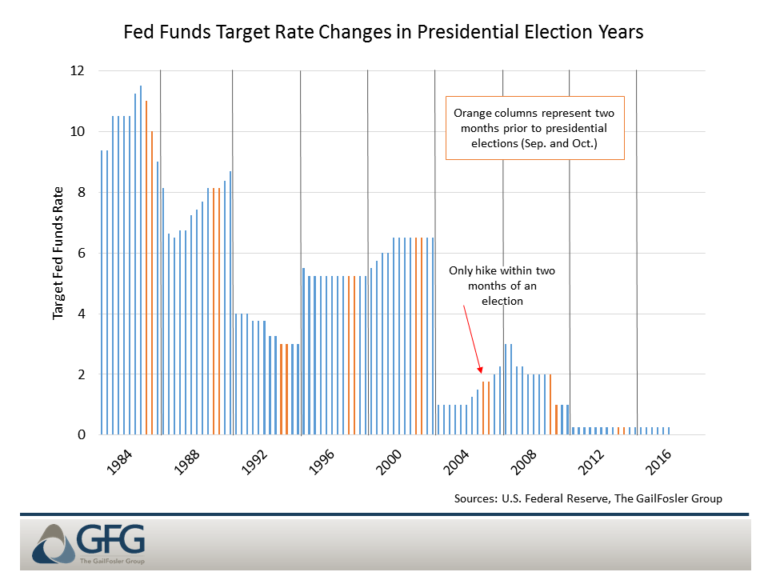 The Federal Reserve’s Response to the 2020 Presidential Election

At the start of this year, when the economy was stronger, the Fed was clearly wary of being perceived as too political.  After four rate hikes in 2018, the Fed made three rate cuts in 2019. But by the end of 2019, with the economy and monetary policy seeming strong in the 11th year of the longest expansion in U.S. history, many experts were predicting that the Fed would hold steady through 2020.

In fact, some Fed watchers predicted that the central bank would defy history by keeping rates steady through the 2020 election. Many experts argued that it was "extremely unlikely" that the Fed would raise rates, especially given that the FOMC indicated interest rates are on pause at the top of 2020.

Then, a global pandemic occurred. And while it hasn’t changed anything, it certainly has made it clear that the Fed has a new focus in terms of ensuring that the economy remain stable

The Impact of Coronavirus on Interest Rates

With the unexpected economic impact of Coronavirus beginning in the first quarter of the calendar year, the Fed has emphasized that the path forward for the economy is uncertain and has voted to pin benchmark short-term rates to near zero.

As recently as July 29, 2020, Federal Chairman Jerome Powell reaffirmed this commitment at joint meeting of the Federal Open Market Committee and the Board of Governors, noting that “we have held our policy rate near zero since mid-March and have stated we will keep it there until we are confident that the economy has weathered recent events and is on track to achieve our maximum employment and price stability goals.” Chairman Powell also emphasized in this statement that a full recovery is unlikely any time soon, indicating people need to feel it is safe to engage in regular activities before economic activity picks up.

Will Interest Rates go up After the Election?

With many economists predicting that the U.S. GDP won’t recover to pre-pandemic levels before 2022, it is likely that the Fed may hold steady with the low interest rate past 2020. This, despite the fact that Chairman Powell, who was appointed by President Trump in 2018, may be replaced as early as 2021, depending on the outcome of the election and the broader economic recovery. More recently, Powell and Company shifted to “Average Inflation Targeting” (AIT) in an effort to discourage deflation, suggesting a greater tolerance to allow prices to rise before raising short-term interest rates (though longer-term rates tend to be more independent from Fed policy and could therefore rise if inflation rears its head).

The Bottom Line for Investors

With unprecedented near-zero interest rates continuing at least into the foreseeable future, borrowing costs are low. This tends to benefit large, multi-national companies that can secure investor capital at relatively low rates and may hurt the US dollar. However, if we start to see signs that price pressures are on the rise, longer-term interest rates could quickly rise back toward a more historically “normal” level.

Regardless what the election and monetary policy bring in the coming years, we’d love to be your trusted trading partner. Please reach out today to see how we can help you develop a trading strategy and capitalize on market opportunities surrounding the election and beyond!