Lots of moving parts for GBP/USD

With all the economic, political, social issues to consider in the US and the UK this summer, direction may be tough to determine in GBP/USD

Both the UK and the US have a lot going on these days, which makes a tough job in determining the direction of GBP/USD even tougher:

Markets seem to be getting worried.  Not only has the UK seen the number of new cases rise to the highest levels since late January, but the delta variant may threaten to push back the final stop on the road to recovery even further than the mid-July date.  Thus far, the US hasn’t had to deal with the delta virus, yet. However, are enough people vaccinated, in either country, for it to affect their economies?

The BOE has already started tapering, having reduced the amount of their bond purchases to 3.4 billion Pounds per week.  As with any central bank committee, there are doves and hawks.  BOE Governor Andrew Baily said that he’s not worried about inflation running near 4%.  On the other end is BOE chief economist Haldane, who voted to cut the total amount of bond buying at the last meeting.  However, his opinion doesn’t matter anymore, as he is leaving the MPC.  In the US, the Fed has admittedly just begun talking about tapering.  The US Federal Reserve is currently buying $120 billion worth of bonds per month!  Tomorrows Non-Farm Payroll report, and jobs data in general going forward, will be a large contributor towards the Fed’s decision as to whether to begin tapering in the next few months.

A bi-partisan agreement was reached last week which will allow for almost $1.2 trillion in spending over the next 8 years for new and repair of “physical” infrastructure projects, such as roads, bridges, pipes and broadband internet.  The bill will be paid for by the sale of strategic petroleum reserves, proceeds from 5G spectrum auction proceeds, and redirected Covid funds, among others.  The most important part of this bill is that there will not be an increase in taxes.  However, Joe Biden is also looking to separately pass a “human” infrastructure bill, which includes such items as climate change, childcare and education.  Republicans are balking at the idea of a human infrastructure plan, but a bill could be passed via reconciliation , in which the Senate would only need  50/50 vote, with the Vice-President casting the deciding vote.  The point: more spending equals more stimulus!

The EU has just granted the UK a 3-month grace period before they must begin following the Brexit agreement to check chilled meats at the border (the sausage war).  Both sides need to come to an agreement on this issue over the next few months or it could result in additional tariffs.

These complicated issues could affect the direction of GBP or USD.  The 240-minute chart of GBP/USD shows that the pair formed a rounding top near the February highs (not shown) and broke lower on June 16th, on the more hawkish-tiled FOMC outcome.  GBP/USD fell to trendline support and bounced to the 61.8% Fibonacci retracement level from the highs of June 16th to the lows of June 20th, near 1.4000.  In doing so, the pair formed a flag formation and is currently on its way to the flag target near 1.3670.  Today, the pair broke below the June 16th lows of 1.3786. If GBP/USD closes the day below this level, it will improve the pair’s chances of reaching its target. 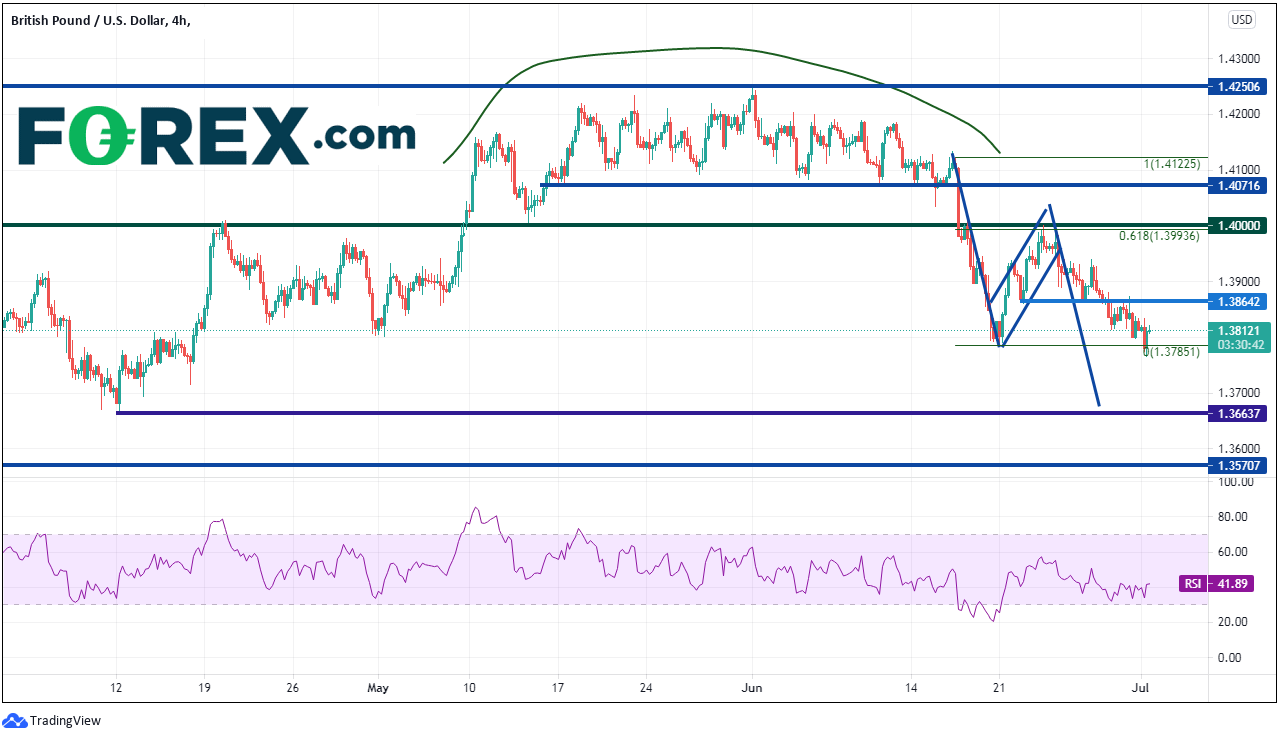 With all the economic, political, social issues to consider in the US and the UK this summer, direction may be tough to determine in GBP/USD.  However, when in doubt, turn to the charts.  Currently, the charts point to 1.3670.  But don’t forget that tomorrow is Non-Farm Payrolls!  If jobs data misses by a significant amount, things can change in a hurry!