A summary of news and snapshot of moves ahead of the US session.

RBNZ delivered a surprise 50 basis-point interest rate cut overnight, rather than 25 widely expected. The news sent the kiwi plummeting – not a surprise given that only three surveyed economists had predicted a 0.5% cut while the other 18 had expected – like us – only a 0.25% cut.  The central bank, which has brought its benchmark rate to the same level as the RBA, also signalled further easing could be possible. Like other central banks, the RBNZ highlighted the worsening global growth outlook and the ongoing US-China trade conflict as the main reasons behind its decision. The RBA, who decided to leave rates unchanged after two consecutive cuts the day before, has also left the door open for further policy loosening. The AUD fell further overnight with the AUD/JPY going beyond our noted downside target at 71.00.

Meanwhile it is another day, another high for German Bunds. As a result, the 10 year German bond yield has hit another fresh low of -0.56% as concerns grow that Germany may be heading for a recession. After a surprisingly good factory orders number yesterday, it was back to reality as German industrial production slumped 1.5% m/m in June compared to a smaller decline of 0.5% expected.

The falling yields and uncertainty over the equity markets have helped to underpin gold to a new high for 2019, now less than $10 shy of $1500. Stocks stabilised yesterday after Monday’s big plunge. However, the indices were approaching key technical levels from where we could see renewed selling pressure given nothing has fundamentally changed regarding the US-China trade spat. 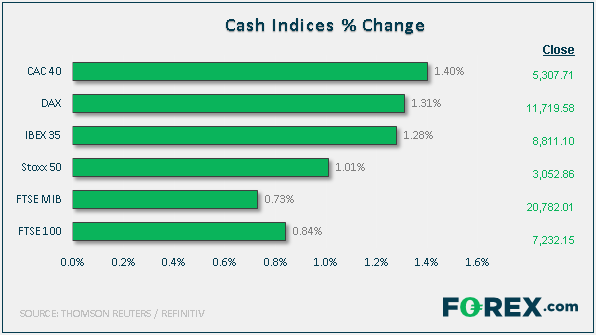 On a micro level, the big stock movers that caught my colleague Ken Odeluga’s attention this morning were Glencore and Byer, among others. He wrote: