The big news at the weekend was from China where fresh data revealed, among other things, a sharp slowdown in industrial production growth. This could potentially revive concerns about the health of the world’s second largest economy but so far the markets have shrugged off the data with Asian stocks closing higher and European indices being mixed at the time of this writing. A bank holiday in Germany means trading volumes are thin in this largely European data-void session. We may therefore see a more meaningful response once trading in the US gets underway.

Recent economic reports from China had been decent, but things turned for the worse once again in April. Last week, we found out that imports extended a streak of declines to 18 months with a 10.9% year-over-year slump in April, while exports fell 1.8% in dollar terms. This weekend, we have found out that industrial production in April grew ‘only’ 6.0% compared to a year earlier, representing a sharp slowdown from 6.8% growth recorded in March and also much weaker than expected. Fixed asset investment and retail sales also grew less than anticipated.

Although one month’s worth of data does not make a trend, there is no denying that economic activity in Chinese standards has been fairly weak for many years now. A few more gloomy figures and sentiment could turn sour very quickly.

The Australian dollar, which tends to correlate positively to Chinese data because of the two nations’ close trade ties, gapped lower at the weekend. However, the commodity currency soon bounced back – possibly due to the corresponding rally in oil and metal prices – and was trading near its session high of around 0.7300 at the time of this writing.

But given the renewed weakness in Chinese data, a dovish Reserve Bank of Australia and the overall downbeat sentiment in the markets lately, we would not be surprised if the AUD/USD were to pare its gains and break to fresh multi-week lows later on in the day or week.

In fact, it is going to be a big week for the AUD/USD due to the sheer number of economic reports scheduled from both Australia and the US.

On Tuesday, we will have the RBA’s policy minutes from its last meeting when it cut interest rates rather unexpectedly. If the minutes suggest more rate cuts are on the way later in the year then this could further diminish the appeal of what still is a relatively higher-yielding Australian dollar and exert downward pressure on the AUD/USD pair. Conversely, if the RBA minutes suggest it was a "one and done" move then the Aussie could come back to life against some of the weaker currencies.

Also on Tuesday, we will have the latest CPI measure of inflation and industrial production data from the US. So, Tuesday could be a big day for the US dollar which could impact the AUD/USD pair both directly and indirectly vis-à-vis the changes in buck-denominated commodity prices. But Wednesday and Thursday could be just as important as, if not more than, Tuesday: the US FOMC meeting minutes on Wednesday will be sandwiched between Australia’s first quarter wage price index and key employment data on Thursday. Later on in Thursday’s session, there will be further data from the US, including the weekly unemployment claims and the Philly Fed manufacturing index.

Overnight the AUD/USD gapped below its 200-day moving average (0.7258) following the release of weaker Chinese data at the weekend. As is usually the case, this weekend gap was quickly ‘filled’ and the Aussie subsequently rallied to make back a big chunk of the losses it had suffered on Friday.

At the time of this writing, the Aussie was testing the prior support level of 0.7300. Given the bearish nature of price action in recent times, there is a good chance the sellers may defend their ground here.

So, the kick-back rally could falter around the 0.7300 handle before price re-tests the 200-day moving average or potentially drop towards the 61.8% Fibonacci retracement level at 0.7210/15 area next.

Alternatively, a decisive break above this short-term resistance level of 0.7300 could lead to a more significant recovery towards the next area of potential resistance around 0.7380. 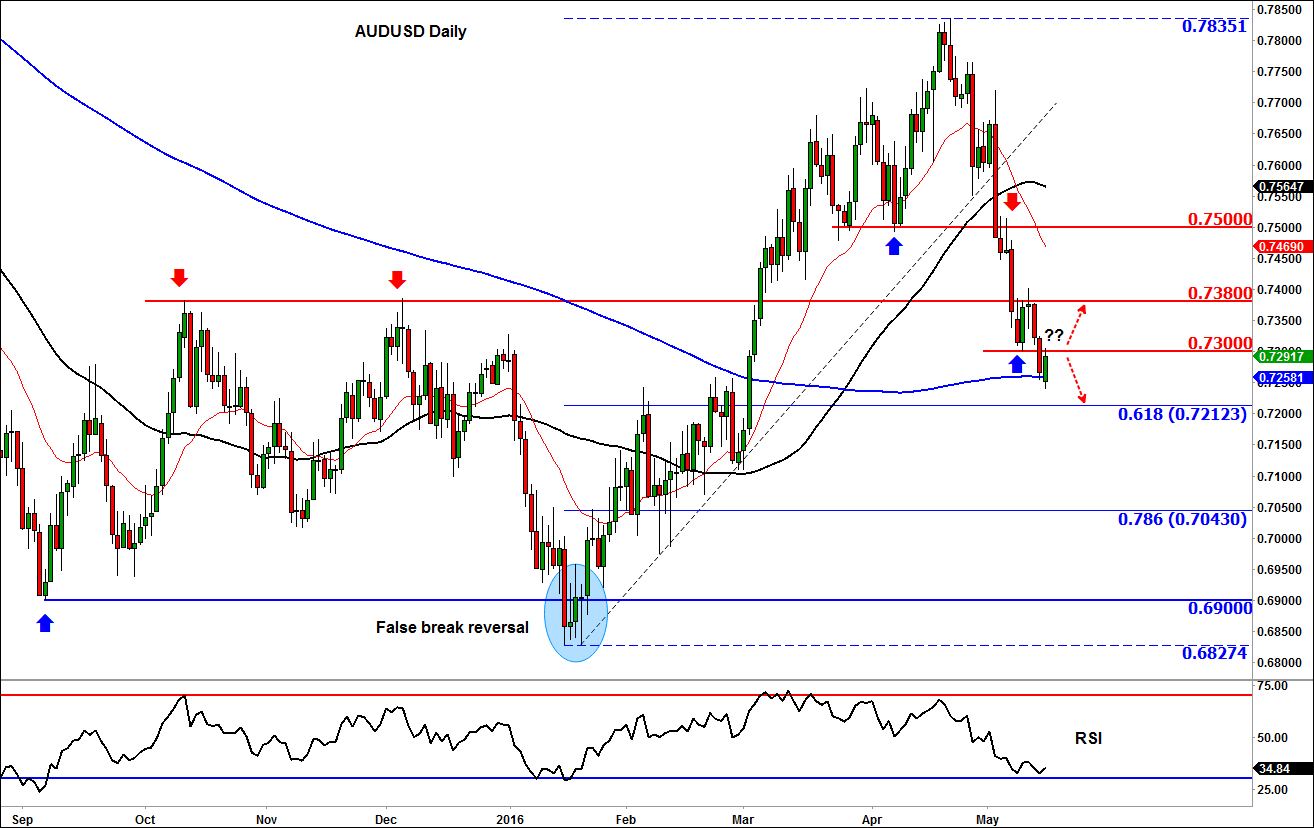