It is a bit calmer than chaos this morning following yesterday's big sell-off in global stock markets and sizeable rally in safe haven gold and yen. But what I have seen in the markets so far this morning has “dead-cat bounce” written all over it.

It is a bit calmer than chaos this morning following yesterday's big sell-off in global stock markets and sizeable rally in safe haven gold and yen. Market commentators blamed yesterday's risk-off trade on shenanigans at the White House. Investors wondered how the Congress will react to reports that the US President Donald Trump tried to pressure the fired FBI head to drop an investigation into his former national security advisor. Investors’ worry is that the President may have obstructed justice, which is a potentially impeachable offence.

But investors have now had a full day to step back and make a more sober assessment of the situation. While they are aware that the situation could get worse, they are also wary of the possibility that the markets may have overreacted to the situation. Following these big moves, speculators are also likely to be taking profit on their positions with a view to possibly re-establish those positions at better levels. Thus, even if we get a bounce in risky assets today, it doesn't mean the worst is behind us.

However, at the time of this writing, there wasn't much of a bounce in the markets with the major European indices holding around their lows hit yesterday. Whether or not more losses will now follow remains to be seen. It could be that speculators are waiting to see if there are any further developments in the US later on today, before making up their minds. But what I have seen in the markets so far this morning has “dead-cat bounce” written all over it.

Apart from The Donald Trump situation, there are not many other factors that the market is currently focusing on, except perhaps the noticeable improvement in UK data this week, which has actually undermined the FTSE as the pound has strengthened further, moving north of 1.30 against the dollar.

After stronger than expected readings for UK CPI, wages and employment figures in the past couple of days, today saw retail sales come in at 2.3% for the month of April, which was significantly higher than expected.

The pound jumped above $1.30 as we had anticipated yesterday following the retail sales data. You can read our GBP/USD report by clicking HERE.

The FTSE meanwhile was testing the lows it had hit yesterday around 7430 at the time of this writing. It was thus not very far off the first important support level at 7400, which was formerly resistance. But with the UK index being near a record high, we can’t possibly be bearish despite the global market sell-off. The commodity heavy index has been supported somewhat by rising prices of oil, gold and silver, supporting commodity-linked stocks. We will only get bearish on the FTSE if and when there is a break in market structure of higher highs and higher lows. Still, in the short-term, it is unlikely that the FTSE would buck the trend of weaker global markets. So it could pull back a little deeper still. 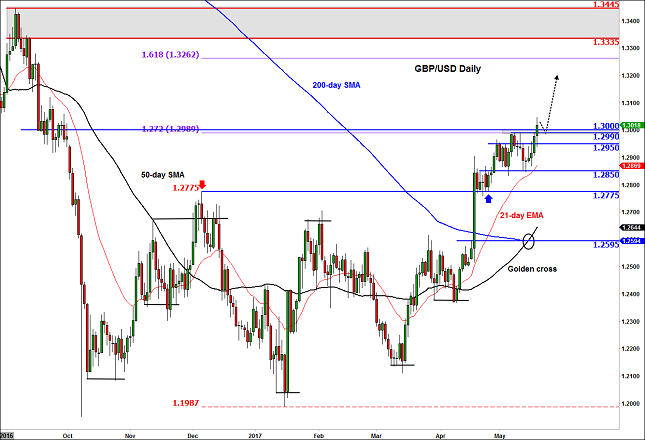 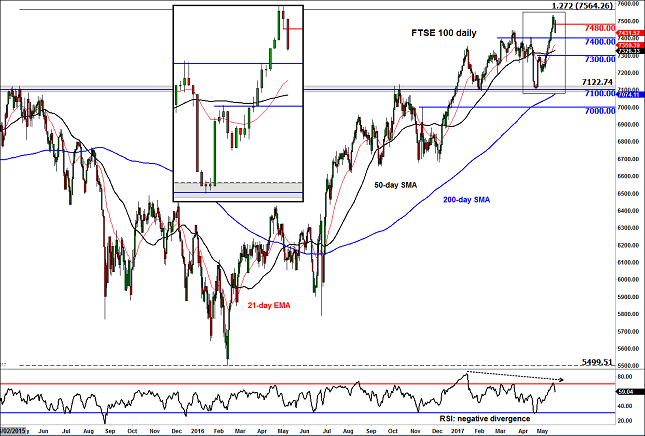