The government is asking the RBNZ to use caution when considering interest rates policy.

Early in today’s Asian session, New Zealand’s Finance Minister Grant Robertson wrote to RBNZ Governor Orr and asked him to factor in house price stability when considering monetary policy.  As a result of lower interest rates, housing prices in New Zealand have skyrocketed and the government is receiving some backlash regarding inequality.  As this request would imply, the government is asking the RBNZ to use caution when considering lowering interest rates further.  The New Zealand Dollar has been strong as of  late, and the news only helped to strengthen the Kiwi.

Granted, NZD/USD has been primarily been driven by the US Dollar over the last number of sessions, however on the news, the pair jumped higher from .6929 to .6983.  The pair later tested the  psychological .7000 level, however failed to remain above it.  On a very short-term timeframe, NZD/USD then pulled back to the 50% retracement from yesterdays lows to todays highs near .6950.  Watch for intraday resistance near .6975 before trying to recapture the .7000 level.  Support is at the 61.8% Fibonacci retracement level of the previously mentioned timeframe and horizontal support near .6937, then yesterday’s lows near .6896. 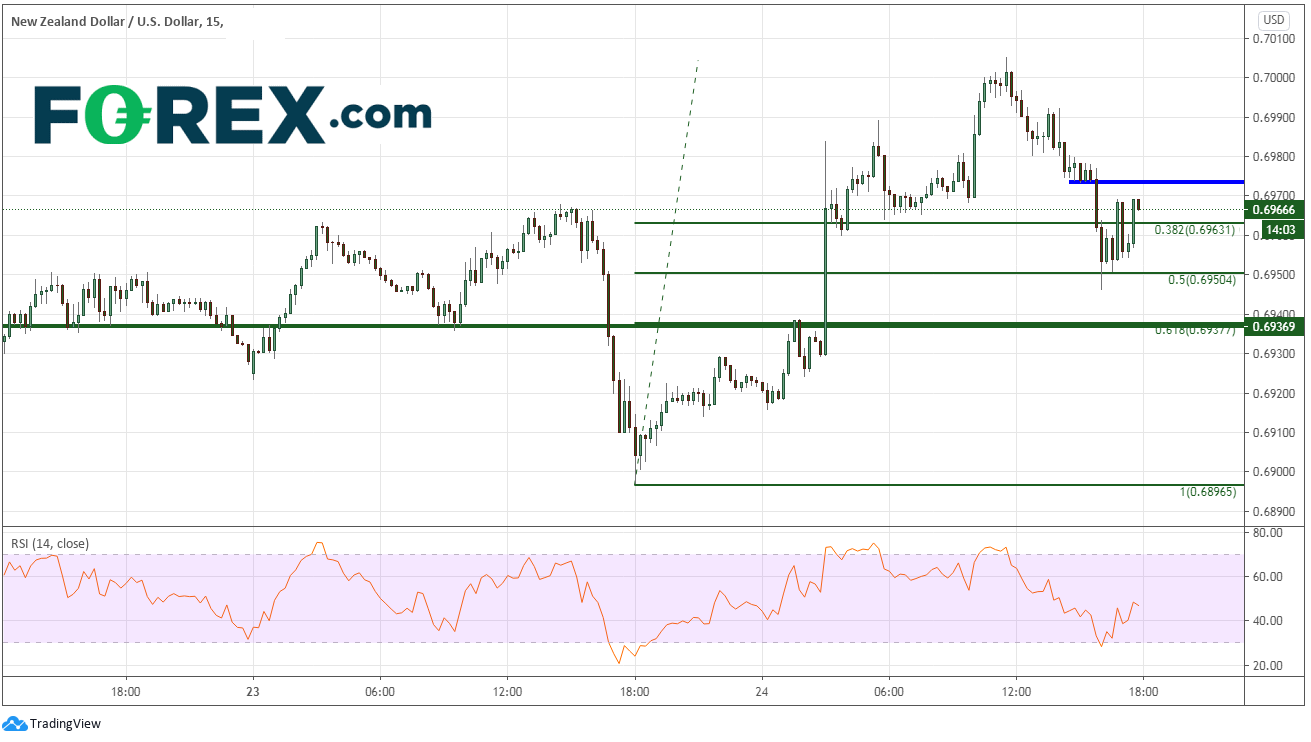 On a 240-minute timeframe, NZDJPY, broke out of the pennant formation on the news and halted after testing the recent highs near 72.80.  The ultimate target for the breakout from the pennant formation is near 74.75, which is also longer-term horizontal resistance.  However, the RSI is overbought and may be ripe for a pullback for bulls to get long.  Short term support is at 72.23. 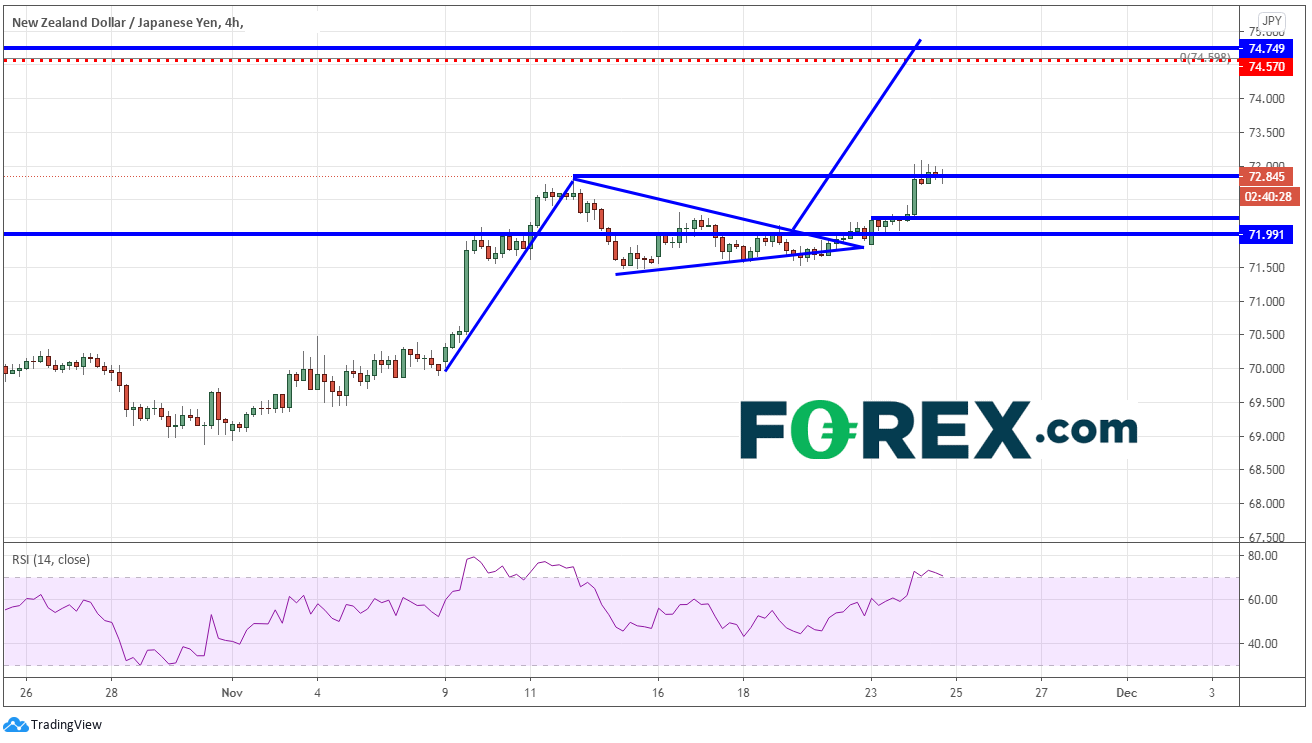 EUR/NZD has been trading lower since mid-October and recently has been forming a descending wedge on a 240-minute timeframe.  However, more recently, price broke below a descending triangle and broke lower on the news, testing the bottom trendline of the wedge near 1.6947.  EUR/NZD has since taken back some of those losses and bounced to horizontal resistance at the base of the triangle near 1.7050.  Watch for bears (NZD bulls) to add to shorts and look for another test of the bottom trendline, now near 1.6900.  Resistance above near 1.7125. 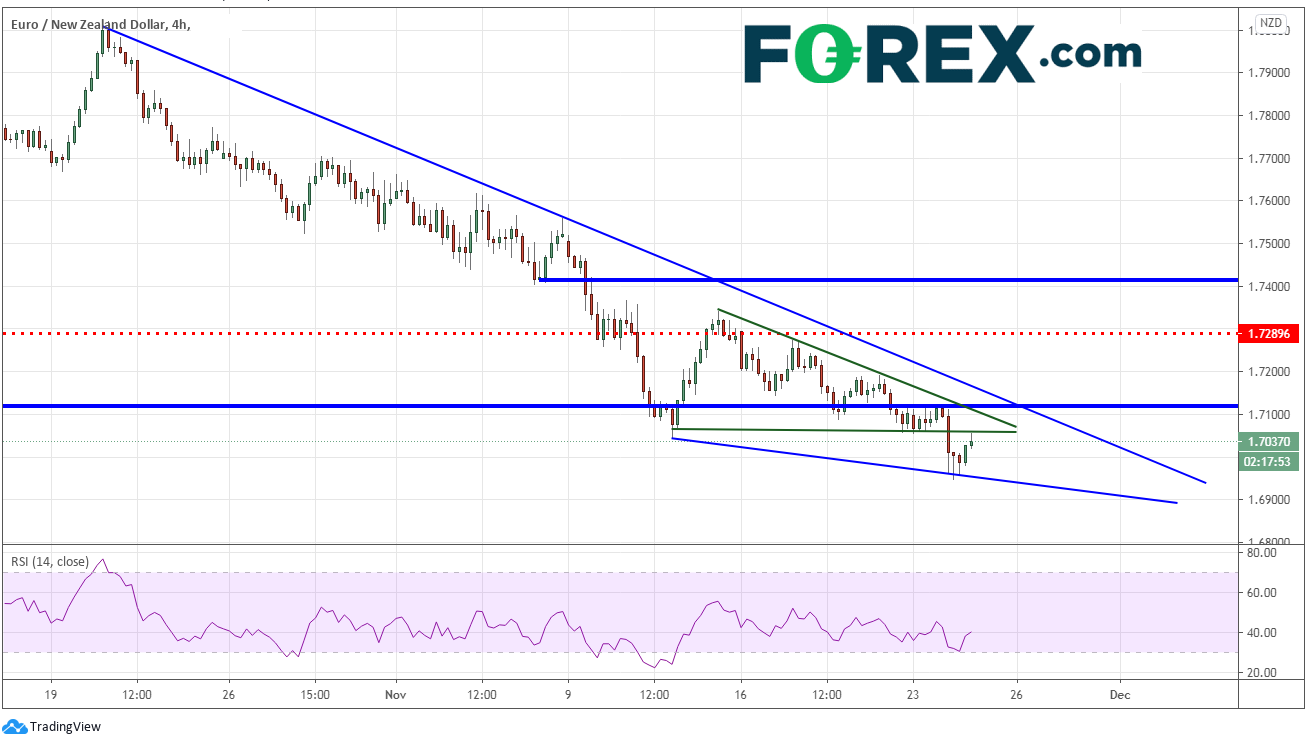 The New Zealand Dollar has continued to be strong vs many of its major counterparts.   The move in the US Dollar seems to have taken control of NZD/USD for the short term, however the news from the Asian session helped propel the Kiwi’s strength.  Watch for dips in the New Zealand Dollar to continue to be bought.

Over the next few days, watch for liquidity to dry up heading into the US holiday.  Keep stops tight as there could be some extended volatility during the US holiday sessions!