The dollar’s rally could gather momentum if the September monthly jobs report beats expectations later on today. This may well be the case given the fact that many of the leading employment indicators released earlier in the week have been stronger than expected.

The dollar’s rally could gather momentum if the September monthly jobs report beats expectations later on today. This may well be the case given the fact that many of the leading employment indicators released earlier in the week have been stronger than expected. So, I do think that the consensus forecasts of 82,000 for the headline non-farm payrolls figure may be too pessimistic. But one thing that is not so pessimistic is expectations that Average Hourly Earnings may have risen by 0.3% last month. Thus, there is scope for disappointment on this front. Still, I can’t help but feel the jobs report will be overall positive. For that reason, I am leaning more towards a dollar rally than a slump this afternoon.

Pairing the dollar against her rivals, I think the USD/CHF may be an interesting pair to watch for a potentially big breakout. Unlike the Federal Reserve, which has turned decisively hawkish now, the Swiss National Bank is still among the most dovish of central banks out there. This is due to the lack of inflation and anaemic economic growth in Switzerland, owing, among other things, to a strong Swiss franc. To help devalue its currency, the SNB is willing to keep its monetary policy stance extremely loose and intervene in the FX markets if necessary. Consequently, the disparity between US and Swiss monetary policy stances are likely to grow larger.

In theory, the USD/CHF should rise over time as investors move their funds from low-yielding Swiss assets, to higher yielding US investment vehicles. In reality, though, it may not be as simple as that, and timing this potential rally could be very difficult. The thing with the Swiss franc is that it is considered to be a safe haven currency. When you-know-what hits the fan, the franc tends to rise sharply. The way US markets have been rallying over the past several days clearly suggest it is risk on at the moment, so safer assets are not very appealing at the moment. BUT if the markets soon go in correction mode then that could boost the appetite for safe haven assets again.

Taking everything into consideration, I still do believe the USD/CHF will be heading higher over time, but from a trading point of view one has to have a very short-term view on the direction of prices: from one level to the next. The next potential resistance level on the USD/CHF is at 0.9850, old support. The next big level beyond here is parity, which comes in just above the 61.8% Fibonacci retracement level against last year’s high. On the downside, the key short-term support level to watch is at 0.9770, which was formerly resistance prior to this week’s breakout. But any move below the most recent low at 0.9710 would be deemed bearish. Unless that happens, the path of least resistance is clearly to the upside for now. 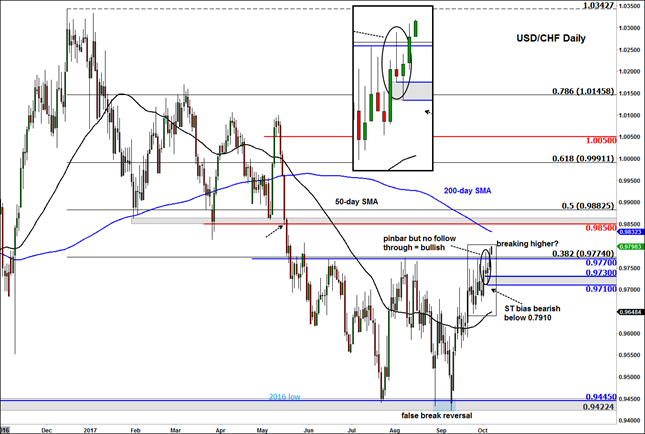