The weaker than forecast NFP figures added to speculation that the Federal Reserve will cut rates giving equities a injection of life.

European markets were already on a front foot owing to optimism that progress was being made in the trade and immigration talks between US and Mexico. The weaker than forecast NFP figures added to speculation that the Federal Reserve will cut rates giving equities a further injection of life.

The ADP didn’t lie, just 75k jobs were created in May, well short of the 175,000 that was expected. This headline figure certainly fits the story that the economy weakened in the second quarter. However, let’s not forget that we saw a weak reading in February and a strong rebound in March, so the Fed are most likely going to want to wait for more data before they start to take any drastic decisions.

Wages lower than expected
With unemployment remaining at 3.6%, we might be tempted to think that headline job creation is weaker due to full employment, however wage growth doesn’t support this story. In the case the full employment we would expect wages to move higher as well. As this isn’t happening the cause for lower job creation appears to be something else, something a little more sinister. Wages disappointed, increasing 0.2%, lower than the 0.3% expected.


Dollar dives 2.5 month low
The market’s reaction is that of a market which is expecting a rate cut imminently. The CME Fed Fund shows the market is now pricing in a 79% probability of a rate hike by July and a 97% probability of a rate rise by September. The dollar dropped to 96.5 versus a basket of currencies, its lowest level in 2 ½ months.


Whilst the start of next week is relatively quiet as far as US economic data is concerned, it picks up in the second half with inflation, retail sales, industrial production and consumer confidence. Any sign of weakness could see the dollar drop toward support at 95.75. 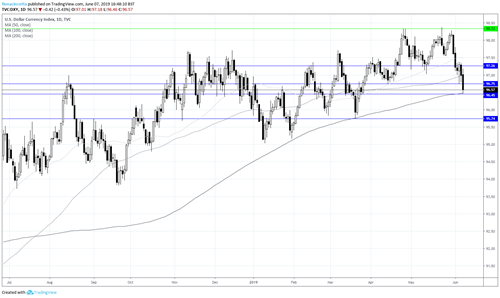