NFP Recap: What You Need to Know About Today’s “Goldilocks” Report

Despite today's strong report, there are reasons to be concerned about the prospects for the US economy...

While the monthly Non-Farm Payrolls report hasn’t been the most important economic release in recent months, it’s still a widely followed and respected gauge of the state of the US labor market (and by extension, the US consumer), so traders were waiting with bated breath for today’s release…

…and at first glance, the June NFP report was stronger than most traders expected:

On balance, today’s report shows a labor market that continues to recover from the unprecedented disruption of a global pandemic and attendant shutdown in broad swathes of the economy. 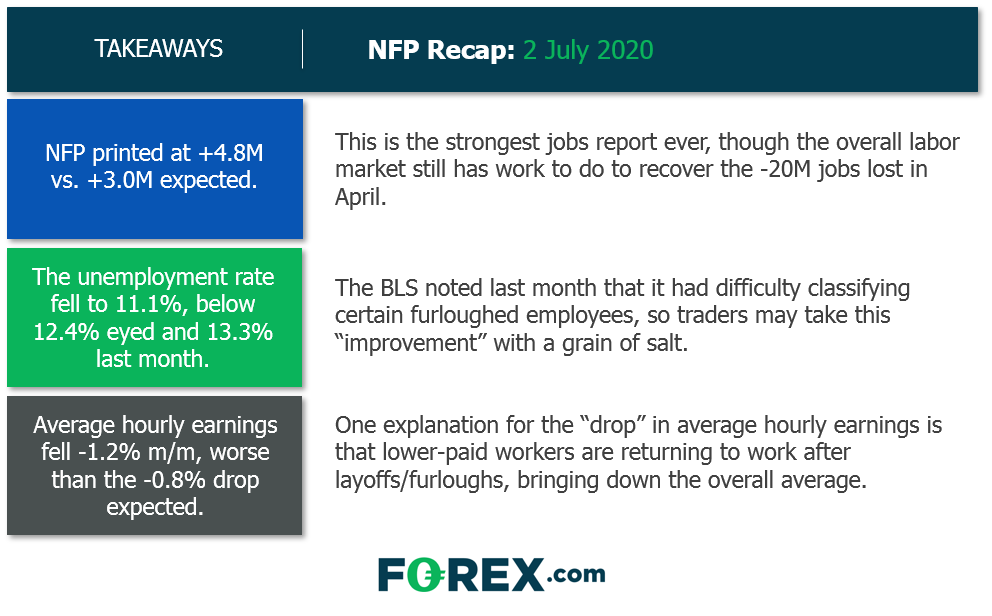 That said, our goal is always to provide context for economic data, and when put into context, there are several reasons to be concerned about the prospects for the labor market moving forward. First of all, even after the strong jobs growth of the past two months, the US economy still has around 15M fewer jobs than it did in February.

Even more importantly, there’s a strong chance that this report will be as good as it gets in the near term. After all, the NFP survey was conducted in early- to mid-June, when almost every US state had lifted shelter-in-place orders, but before the virus started to resurge in earnest over the last 2-3 weeks. In other words, today’s jobs data almost perfectly captures a “goldilocks” window for the US economy, and labor market figures moving forward may show deterioration relative to a potential “high water mark” midway through last month.

So far, traders are viewing today’s jobs report as a positive, “risk on” sign for global markets. US index futures are poised to open more than +1% higher, matching the strength in European equities. The yield on the benchmark has already risen over 2bps to nearly 0.71%, with oil also gaining a little ground since the release. Meanwhile, the US dollar is ticking higher against its major rivals and gold is trading marginally lower as we go to press.

With a long holiday weekend looming stateside and the potential that this is “as good as it gets” for economic data over the foreseeable future, readers should keep a close eye on markets as we move through today’s session for any signs that the initial risk on reaction is fading.