Non-Farm Payrolls beat; What will the Fed think?

According to the Non-Farm Payrolls report, the US added 390,000 jobs to the economy in May vs an expectation of +325,000 and a slightly higher revised print to 436,000 for April.  The Unemployment Rate was unchanged at 3.6% vs 3.5% expected.  Average hourly earnings were also unchanged at 0.3% MoM vs and expectation of 0.4%.  The Fed should be happy with this data as jobs are still increasing, yet wages seem to be plateauing.  However, this may also make the Fed feel more emboldened to hike rates by more than expected in the near future due to the confirmed tightness in the labor markets.  Fed Chairman Powell has said recently that the Fed is willing to get inflation down at the expense of the 3.6% Unemployment Rate.  Does this mean that good news on the job front is bad news for the markets?

The US Dollar went bid on the data release and the DXY moved from 101.92 to 102.19.  Traders initially felt that “good news is bad” as the better headline data and unchanged average hourly earnings were the perfect storm for the Fed. On a daily timeframe, USD/JPY had been moving higher in parallel with US 10-year yields into the most recent high on May 9th at 131.34. The current correlation coefficient between USD/JPY and US 10-year yields is +0.92.  Readings above +0.80 are considered strong. USD/JPY then pulled back in a descending wedge formation as the RSI began diverging with price in overbought territory.  The pair reached a near-term low of 126.36 on May 24th.  On Tuesday, USD/JPY began moving higher once again and broke out of the descending wedge pattern.  The target for the breakout of a descending wedge is a 100% retracement, which in this case is 131.34. On a 240-minute timeframe, USD/JPY paused briefly at the psychological round number resistance level OF 130.00.  However, after the NFP release, the pair (and US yields) continued its move higher.  First resistance is at the May 9th high of 131.34.  Above there is horizontal resistance dating to 2002 at 131.84 and then the 127.2% Fibonacci extension from the high of May 9th to the low of May 24th, near 132.70.  However, notice the RSI is in overbought territory once again, an indication that price may be ready for a correction. If USD/JPY pulls back, first support is the psychological round number at 130.00.  Below there, price can fall to horizontal support at 128.30, then additional horizontal support at 127.58. 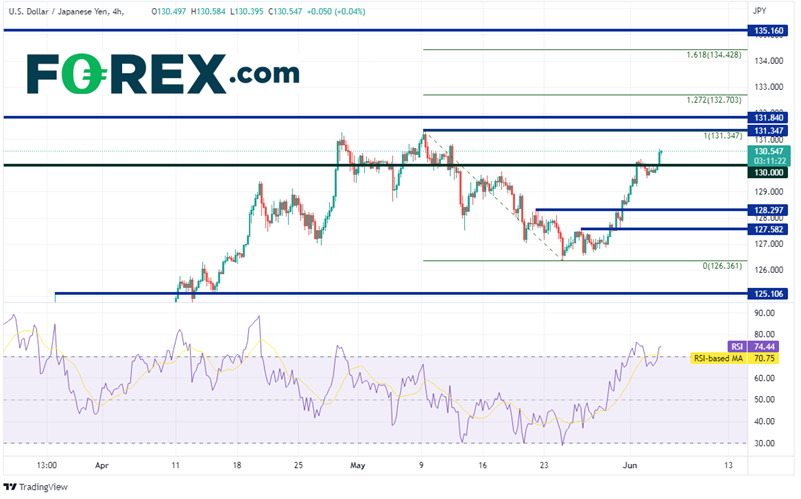 Today’s headline NFP print and average hourly earnings data should make the Fed happy.  More jobs and lower wage growth:  What’s not to like?  However, one has to consider that the Fed may feel more emboldened to raise rates with the confirmation of a tight labor market.  Watch the US 10-year yield for clues as to where USD/JPY may be headed next.