Whilst inflation is not exactly running hot, it does alleviate some pressure for RBNZ to ease again in August. And has kept NZD as the strongest major this past month.

Inflation data for New Zealand came in on target to see both annual and quarterly rise to 1.7% and 0.6% respectively. At 1.7%, it’s not too far from the centre band of their 1-3% inflation and CPI has clearly come a long way since its cycle low in 2016. And given RBNZ are watching inflation and employment data closely ahead of their 7th August meeting, it lowers the potential for further easing if employment is to improve.

At their last meeting, RBNZ weren’t quite as dovish as expected, although they added a lower cash rate ‘may’ be needed over time which still left the door open for it. Still, even if August is another hold, the NZD 5 and 6-month NZD overnight index swaps have full priced in a 25bps cut by the end of the year.

NZD has remained the strongest major over the past month which has seen the bearish trends on GBP/NZD and EUR/NZD develop nicely. As my colleague Fawad Razaqzada highlighted yesterday, GBP/NZD is near key support levels to the potential for a pullback could be on the horizon before the trend continues. 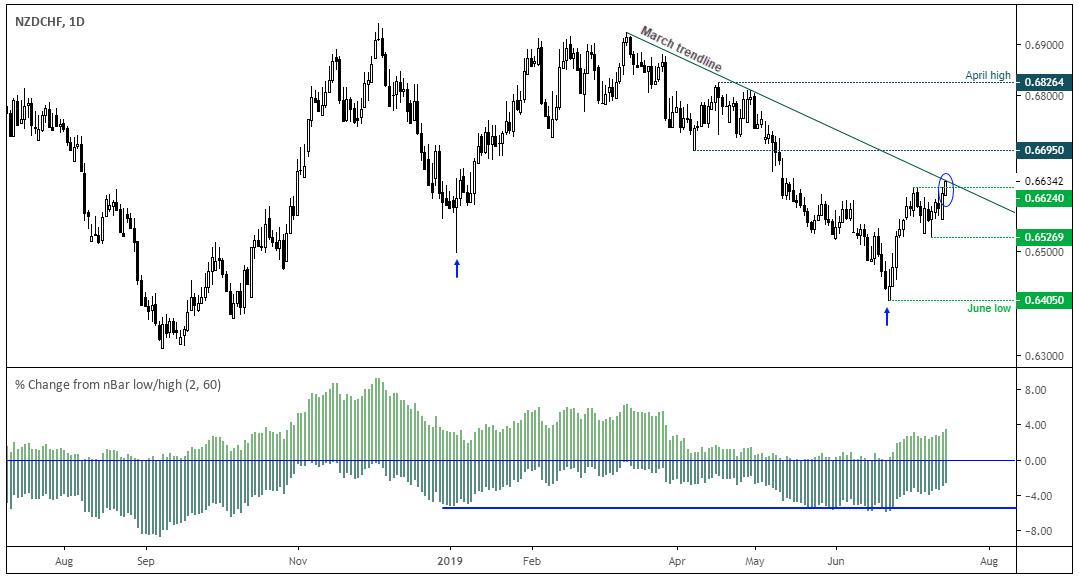 However, we’re now watching NZD/CHF for a break higher and technical suggest we may have seen a significant low. The lower indicator is measuring a % rally from a 3-month high and low. We can see that the cross has fallen around 5% over the prior 60 days, a decline that saw a sizable bounce for NZD/CHF in January. Obviously, we do have the benefit of hindsight here as prices have since recovered about 3.5%. But the rebound is constructive, formed a V-bottom and provided a higher high and low with a shallow pullback.