NZD/JPY: breakout imminent… but in which direction?

As trading winds down ahead of the long Easter holiday weekend, most markets are going into consolidation mode with trading ranges narrowing down. But unlike the Western stock exchanges, the FX markets will remain open on Friday and next Monday. Volumes will most likely be on the thin side, but that doesn’t necessarily mean volatility will be low. In fact, because of the lower expected volumes, the potential moves may well be more pronounced than would normally be the case during news releases and other unexpected announcements. Looking at the economic calendar, only a handful of macro pointers are due for release over the coming trading days however. Chief among them are inflation figures from Japan tonight and the final US fourth quarter GDP estimate tomorrow. Data from these nations will also dominate the calendar on Monday.

As you would expect therefore the USD/JPY may be a good pair to watch and/or trading over the coming days. But one other yen pair that’s catching my attention is the NZD/JP and for all the wrong reasons after the RBNZ recently turned dovish and cut interest rates in a surprise move, while the BoJ has refrained from expanding its QE programme further. In theory, this should be bad news for the NZD/JPY pair as the yield differential between the two nations narrow.

As the daily chart of the NZD/JPY shows, below, the cross has been trying to establish a long-term base around the 75.00 handle, but so far without much success. All the three moving averages on the chart are still pointing lower and reside in the "wrong" order, while the momentum indicator RSI has worked off "oversold" condition but without a significant appreciation in the underlying exchange rate. This is a bearish sign, suggesting that it may potentially break out of its triangle consolidation pattern to the downside, soon.

If it does head lower and break below 75.00 again then it could easily revisit the prior reference points around 74.00 initially and then the August 2015 low at 73.15/20 next. Needless to say, an eventual break below that level, if seen, would be a significantly bearish development.

However, so far, all the negative news has been absorbed without any further deterioration in the exchange rate. This is potentially bullish. However, as things stand we remain cautiously bearish until the chart tells us otherwise. This could happen if and when a key reversal candlestick pattern is created around these levels. Either that or the NZD/JPY moves above some resistance levels soon, starting with the 50-day moving average and the triangle resistance trend at around the 76.00/10 area. The prior highs of 77.80 and 79.20 are among some of the other short-term resistance levels to watch. 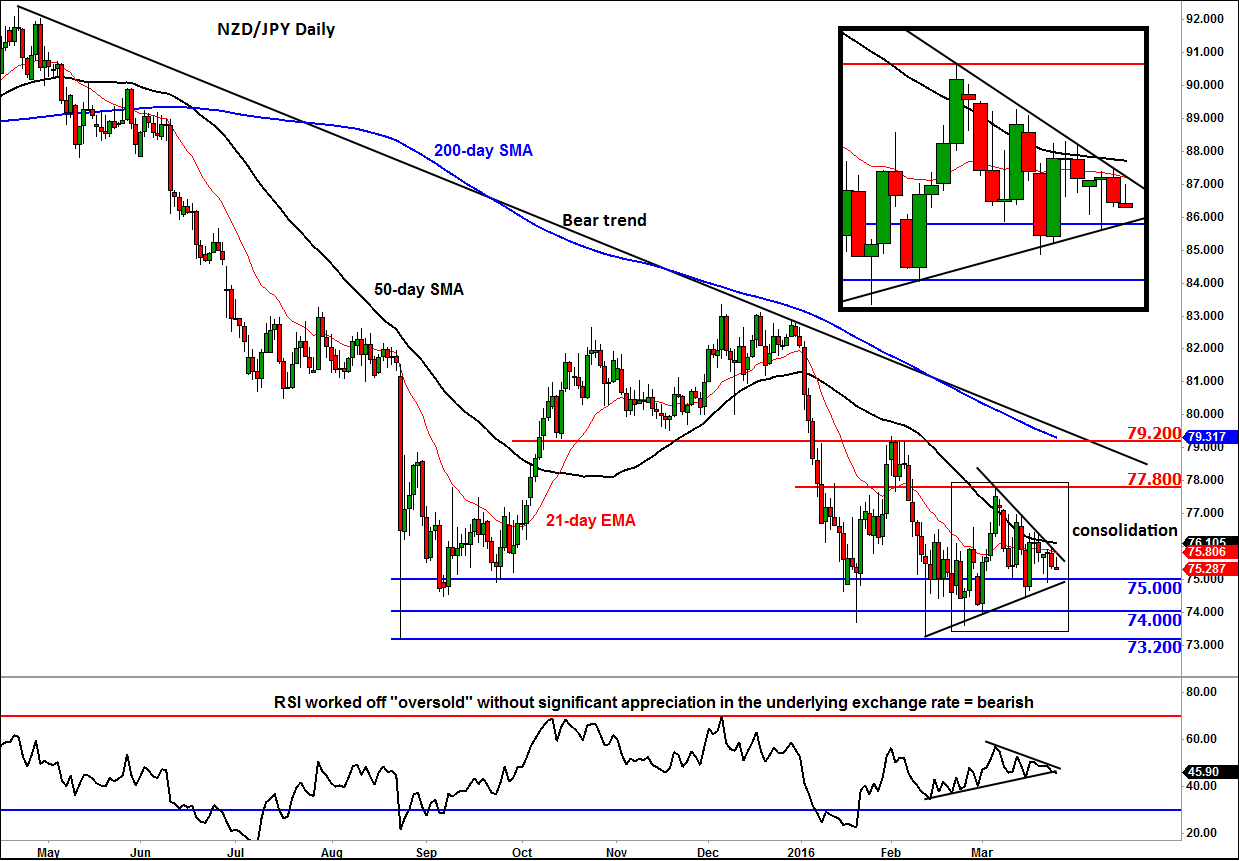