NZD/USD: Bullish breakout on the cards for Kiwi?

The US dollar has fallen quite sharply in recent days on receding expectations about another Federal Reserve rate increase this year. The dollar’s weakness has been clearly evident in the currency pairs which were heavily one-sided trades, such as the EUR/USD (short), USD/JPY (long) and USD/CHF (long). Given the dollar weakness, one would have expected currencies where the central bank is more hawkish to have done better, such as the Australian and New Zealand dollars. But the AUD/USD and NZD/USD have only risen marginally thus far. Undoubtedly, concerns about the slowing down of economic growth in China (their largest trading partner) have been a big reason why we haven’t seen a more decisive move higher in these pairs. Of course, the AUD and NZD are also commodity currencies and so they don’t tend to do well when the underlying prices of commodities are also falling.

But from a purely rate-differential point of view, a strong argument can be made that these currency pairs may have bottomed out, especially since they have stopped declining – for now, anyway – in spite of continued falls in commodity prices (excluding precious metals, of course). The highest interest rates among the developed nations are in New Zealand and Australia. At 2.5 and 2.0 per cent respectively, they are significantly higher than the negative rates in much of Europe, or the near zero in the US. What’s more, both the RBA and RBNZ have turned neutral, so further rate cuts are no longer on the agenda at the moment for these central banks. Furthermore, non-mining sector employment in Australia has been growing sharply recently, too. Imagine would happen if the other key commodities bottom out now.

Concentrating on the NZD/USD now and the daily chart clearly shows consolidation near the multi-year low it has been trading around since the middle of last year. But recent price action and the Fed’s change of tone regarding interest rates in the US, point to a potential break higher. The Kiwi has climbed back above the pivotal 0.6500 handle in a bullish manner, creating a higher low in the process. It has also broken above short-term resistance, which has since turned into support, at 0.6585. In addition, price is currently above the 50-day moving average, which is now pointing higher, if only modestly. The 50- is fast closing in on the 200-day average; a cross above it would create a "golden crossover." This, should it happen, would be another bullish outcome. When the moving averages are in this particular order, it is thought that most trend followers would be looking for buying rather than selling opportunities. The NZD/USD itself is also trying to break above the 200-day average, which comes in just below the 0.6700 handle. Here, the Kiwi is also testing a bearish trend line that has been in place since July 2014. Thus, a break above this key level would strongly suggest price may once again head towards the key 0.6840-0.6880 zone, and this time potentially break above it.

In short, the NZD/USD could be in the process of forming a base and so a breakout may well be on the cards. A closing break above the 200-day moving average and the bearish trend line would be a bullish outcome (which could happen today), while a potential break above the key 0.6840-0.6880 resistance area would be the confirmation. The short-term bias would only turn bearish again if the NZD/USD breaks back below the 0.6585 support level. And the bullish setup will become completely invalid if the previous swing low around 0.6345 is breached. 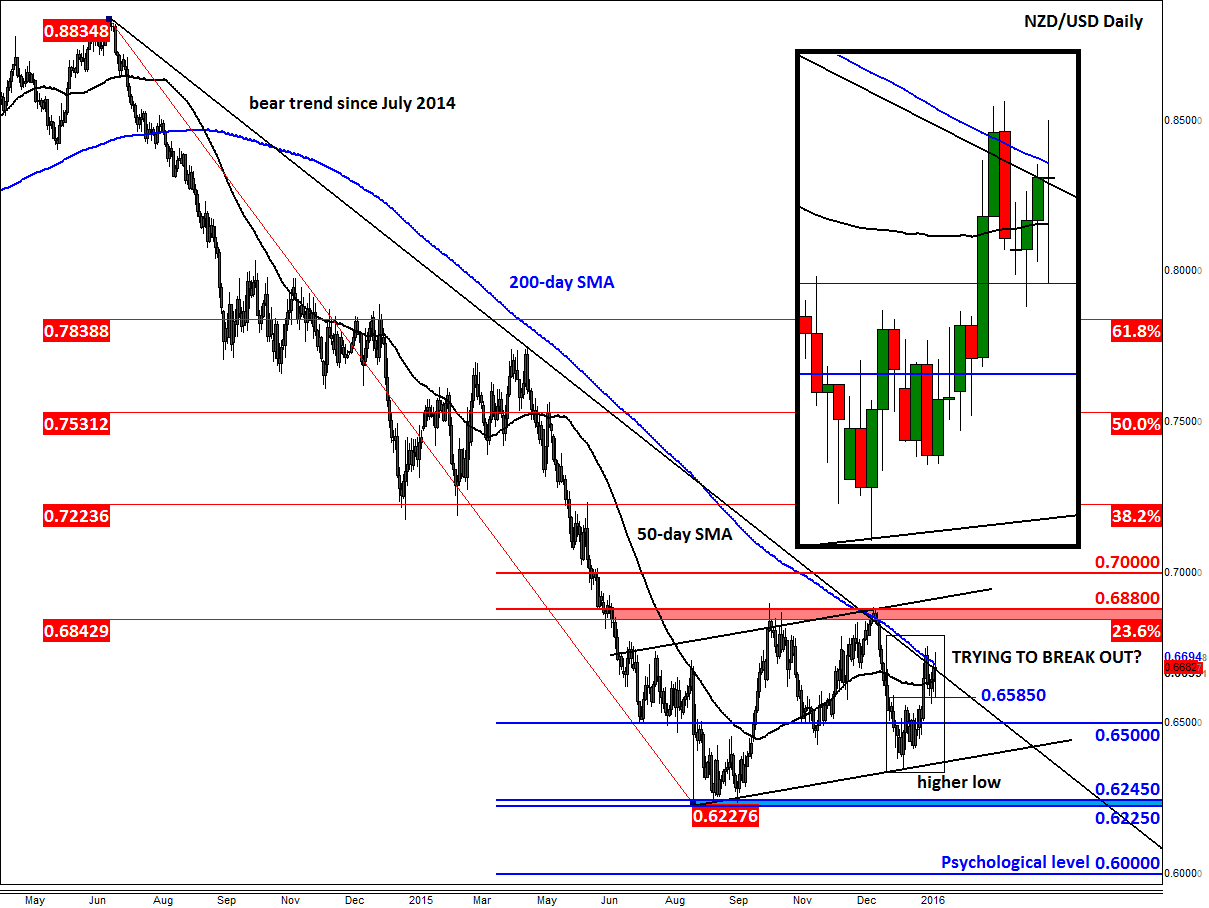