After months of uncertainty and speculation you would think there will be some clarity about the crude oil situation just days ahead of Wednesday’s OPEC meeting. Well, you would be wrong. In fact, very wrong.

After months of uncertainty and speculation you would think there will be some clarity about the crude oil situation just days ahead of Wednesday’s OPEC meeting. Well, you would be wrong. In fact, very wrong. Just last week, sentiment on the oil market had turned positive again as comments from oil ministers of Saudi Arabia and its allied Gulf states had revived hopes that the cartel will come to an agreement with Russia about reducing oil production. However, on Friday Saudi announced that it would not be participating in an informal meeting of non-OPEC producers taking place today since there was no clear consensus amongst the OPEC itself, so there was no point. In addition, contrary to his previous remarks, Saudi’s energy minister said the oil markets would rebalance in 2017 even without a production deal.

Given this uncertainty oil traders – buyers and sellers – are taking no chances as they use every opportunity to take quick profits. Consequently, oil prices continue to move wildly in a generally supportive environment but inside a market structure that is characterised by lots of false moves and indecisive price action. Expect to see further choppiness until at least Wednesday, unless OPEC’s next move becomes clear one way or another before the actual meeting.
A production cut/freeze will be good news in the short-term, but it would probably not have a long-lasting impact as after all the oil market will still remain oversupplied because the OPEC and Russia aren’t going to reduce oil production significantly from these record-high levels. The potential price gains in the short-term will likely be capped in the medium term by expectations of renewed rise in oil production in the US. Here, drilling activity has been rising sharply in recent weeks, which usually translates into higher oil production at some point down the line. After all, a slightly higher oil price will make marginal increases in production more profitable. What’s more, there won’t be many government restrictions to limit shale producers from ramping up output. President-elect Donald Trump has already announced that all restrictions on shale oil (as well as shale gas and coal) production will be lifted in his first 100 days in the office as part of his protectionist policies aimed at creating jobs.
In terms of today’s session, crude oil prices initially fell further in overnight trading after Friday’s big drop as scepticism over a production deal grew. However, both oil contracts have since bounced back strongly as some are still hopeful that they will be able to reach a deal. So it is basically static volatility, even if the percentage moves appear to be gigantic on a day to day basis. OPEC experts have started a meeting in Vienna. They will make recommendations to their respective ministers on how exactly they could reduce production at the official meeting on Wednesday. 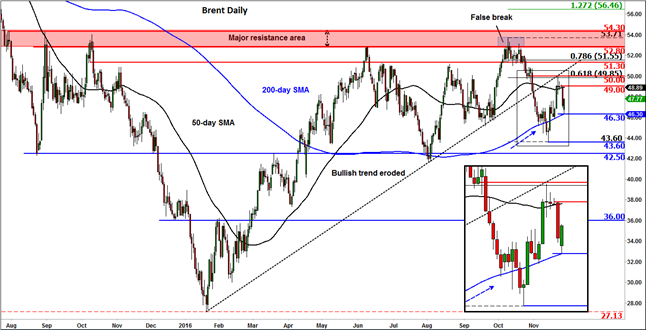