The Iraqi protests have a similar quality to the ones in Egypt that eventually led to the Arab Spring...

Anti-government protests in Iraq have been percolating for a few weeks now and have gone largely unnoticed in the oil market because they have mainly centered on the capital city. However, the protestors’ anger is building and is increasingly focusing on hitting the Iraqi government where it hurts: its oil revenue. The protestors are beginning to move against the oil facilities which they see as a symbol of a corrupt government that is benefiting from oil revenue, and they are beginning to choke off the country’s key oil export points.

While Iraq’s oil production and refining facilities are scattered across the country, exports are centered in a relatively narrow southern corridor on the coast in the Arabian Gulf where only a few ports can accommodate large oil tankers. Over the last two weeks, protestors have blocked off one of the major ports, Umm Osr, leaving hundreds of trucks parked on the side of the road.

More than 90% of the country’s oil is exported from southern Basra terminals - in September, 3.34 million bpd left this way. Only a fraction of Iraq’s oil leaves the country via other routes. September shipments from northern Kirkuk oilfields to the Turkish port of Ceyhan were only around 83,220 bpd and deliveries by truck to Jordan were around 10,000 bpd. The country could produce closer to 5 million bpd but is holding back in compliance with a production-cutting agreement between OPEC and non-OPEC producers.

The Iraqi protests started off in early October and have a very similar quality to the ones in Egypt that eventually led to the Arab Spring. In the first few days the government responded with an unnecessary heavy hand including using live ammunition which caused more than 260 deaths and only served to stoke up the protests even further. Now the protesters seem dug in for the duration. Given that part of their anger is directed at the uneven distribution of the oil revenue and corruption at the top, expect oil facilities and export lines to remain a target until the situation is addressed with deeper political change. 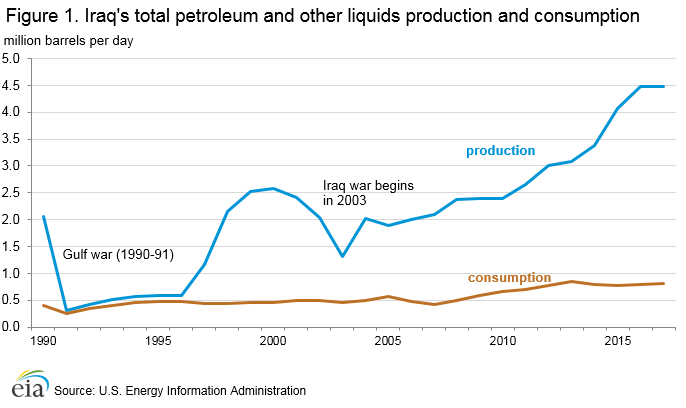 The Eurozone’s industrial production data on Wednesday and China’s numbers are unlikely to bring in big surprises. Recent data for Europe has shown very anemic, if any, growth, with big drivers like German manufacturing continuing to stagnate. Chinese industrial production in September increased by 5.8, only a fraction below the pace of growth of the country’s GDP.  US-China trade talks are continuing to take two steps forward, two steps back, and with the overall global economic growth continuing to stall, it is unlikely that China’s IP will make much sustained progress in the immediate future.

The informal discussions leading up to the full OPEC meeting in Vienna are continuing apace with the biggest producers signaling that they are unwilling to opt for further output cuts as oil volumes are already lower than some countries need to balance their budgets. OPEC’s monthly oil report on Thursday will provide some numbers to crunch and potentially for Saudi Arabia to point a finger at member states that have not been sticking to their targets. Iraq was one of them but with the country currently embroiled in protests it might be difficult to get any kind of workable commitment from the country’s oil minister.