OIL MARKET WEEK AHEAD Shanghaied by the Virus

Coronavirus will hit Chinese oil demand from all sorts of different directions...

Normally by this point in the Chinese New Year holiday, China would have started returning to business as usual, but instead next week 14 provinces will not open for business. This includes key manufacturing regions in the east of the country, a newly-built Tesla plant, China’s largest port in Shanghai, and an iPhone plant in Henan.

The virus will hit Chinese oil demand from all sorts of different directions: lower industrial demand, shrinking jet fuel prices caused by flights to and from China being cancelled, and lower petrol demand as transport is reduced to a bare minimum.

Chinese data scheduled for release during the week, including manufacturing PMI and imports and exports data, will be of little help in trying to assess the current situation but will show if the underlying manufacturing activity managed to maintain its slow but steady pace of growth.

Saudi Arabia has been sounding out other OPEC member countries about bringing forward the cartel’s scheduled March meeting in order to discuss the impact of the coronavirus. Dates being floated were in early- or mid-February, but according to Bloomberg, the oil ministers ran into resistance from Russia. In the week ahead there is likely to be more to-ing and fro-ing from OPEC members, particularly after the World Health Organization declared the spread of the virus an international health emergency. If the group does bring the date forward, the most likely outcome of an early session would be further cuts aimed at stemming the decline of oil prices. The oil market is already sailing very close to being oversupplied this year and even a small decline in demand could easily tip it into oversupplied territory.

After Shell reported weaker-than-expected results caused by lower oil prices last year, the market is already bracing for a similar message from BP on Tuesday. However, the picture will be slightly more complicated in that low oil prices would have affected BP’s upstream business, but the cheaper raw material would have also worked in favor of the company’s downstream business. Also in BP’s favor is the acquisition of BHP Billiton’s US shale gas operations which added about 190,000 barrels of oil equivalent per day to the company’s production.

With some 70% of the petrol produced in the US used for transport, new car sales are a good indicator of which way demand will be heading over the coming months. US car sales deteriorated during the course of 2019, showing a 12.5% y/y decline in December. Given the slight slowdown in wage growth and job creation over the last two months, car demand is also likely to have remained on a slight downward trajectory. 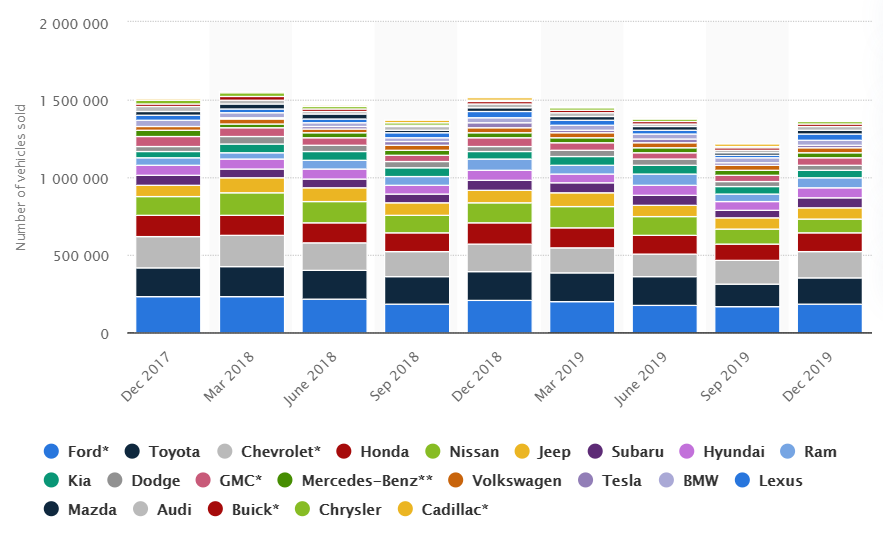