<p>The Australian dollar gapped lower at the open overnight on fears Australia’s election deadlock could jeopardize the country’s AAA ratings.  While the result will not be decided until at least Tuesday, the AUD/USD and AUD crosses have all recovered remarkably well. The AUD/USD has bounced 100 pips from its overnight low of around 0.7445 to reach a high so far of 0.7545, while the AUD/JPY has recovered from a low of 76.28 to reach a high of 77.40.</p>

The Australian dollar gapped lower at the open overnight on fears Australia’s election deadlock could jeopardize the country’s AAA ratings.  While the result will not be decided until at least Tuesday, the AUD/USD and AUD crosses have all recovered remarkably well. The AUD/USD has bounced 100 pips from its overnight low of around 0.7445 to reach a high so far of 0.7545, while the AUD/JPY has recovered from a low of 76.28 to reach a high of 77.40.

Tuesday will indeed be a big day for the commodity currency, for in addition to the political situation the Reserve Bank of Australia will need to make an interest rate decision and there will be some important economic data to look forward to as well, including retail sales and trade figures. The RBA is widely expected to keep monetary policy unchanged after it trimmed rates to a record low 1.75% in May from 2.0% previously. In June, the RBA decided to leave rates unchanged after realising GDP in the first quarter had expanded at a rate of 3.1%, which was stronger than expected.  The central bank also showed little concerns about the Australian dollar’s renewed strength. But with the AUD appreciating further against the likes of the USD, EUR and GBP, and given the political situation, the RBA may at the very least deliver a verbal intervention at this meeting.

Against the New Zealand dollar, the AUD has actually depreciated since the RBA’s last policy meeting. With the NZD being among the strongest of currencies out there, the AUD/NZD could therefore fall the most in the event the RBA is more dovish or if Australia’s economic figures turn out to be weaker than expected. However, the NZD is probably not the best currency to trade the AUD’s potential strength against in the event the RBA is more hawkish than expected.

From a technical stand point, the AUD/NZD’s desire to hold below long-term support/resistance level of 1.0500 for several days suggests that the pressure is indeed building for a potential move lower. Price has been making lower lows and lower highs, all the moving averages are pointing lower now and the long-term bearish trend line, which has been in place since the year 2011, has recently re-established itself after a temporary break. You get the picture: the trend is bearish and the path of least resistance is to the downside, for now. Barring an unexpectedly hawkish RBA, the AUD/NZD is thus on course to potentially drop all the way to parity (1.00) where it had found strong support in the past. Should it get there, we would then expect to see a rebound because of the fact the psychologically-important level converges with a potential Gartley double bottom pattern.  Obviously there will be some other key levels to watch on the way down, including the 127.2% Fibonacci extension level of the BC move at 1.10270.  Conversely, if the AUDNZD breaks back above the long-term support and resistance level of 1.05, or more specifically above the 1.0500-1.0550 resistance zone, then a potential short-squeeze rally towards the 50-day moving average (1.0655) or prior resistance at 1.0740 could become possible. 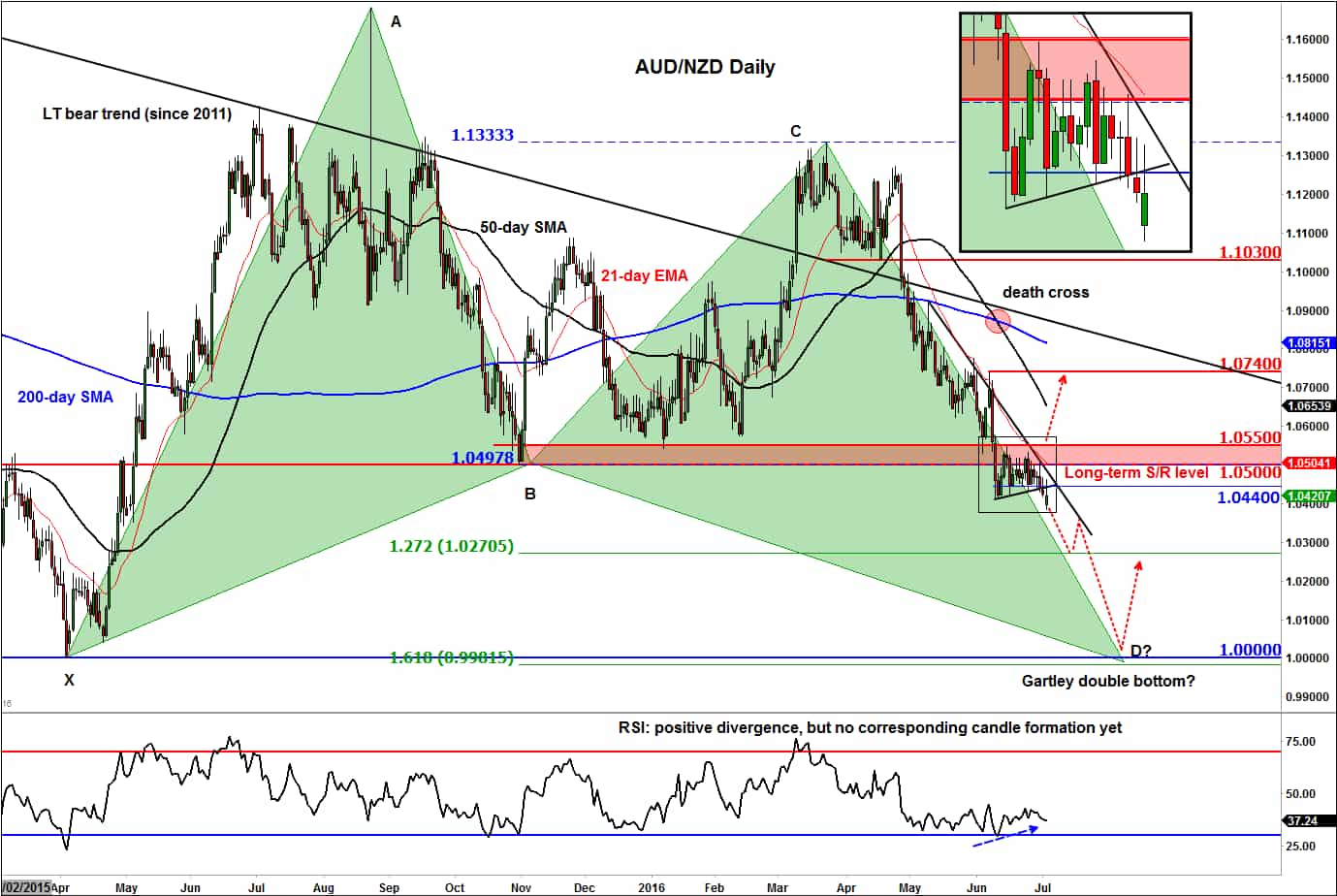