RBA held rates at 1.5% earlier this month and provided what appeared to be a fairly-balanced and neutral statement. We’d noticed that RBA remained confident in the labour market picking up, but it was also the essential ingredient to fend off a dovish stance. So, when the minutes discussed cutting if employment faltered, traders took it as a sign that perhaps the RBA were not as confident with the labour market as they’d been letting on, which saw traders drive AUD to the bottom of the pack.

Still, it’s worth remaining level headed as it would be irresponsible for RBA not to discuss various scenarios, especially given that they’re neutral. So, like many other central banks, it’s all about the data and this makes Thursday’s employment data and next week’s CPI the more important. If the data goes against them, we have the playbook for a cut and to sell AUD. Yet today’s weakness appears like a knee-jerk reaction ahead of the facts, which could see its downside as limited ahead of these key data points. 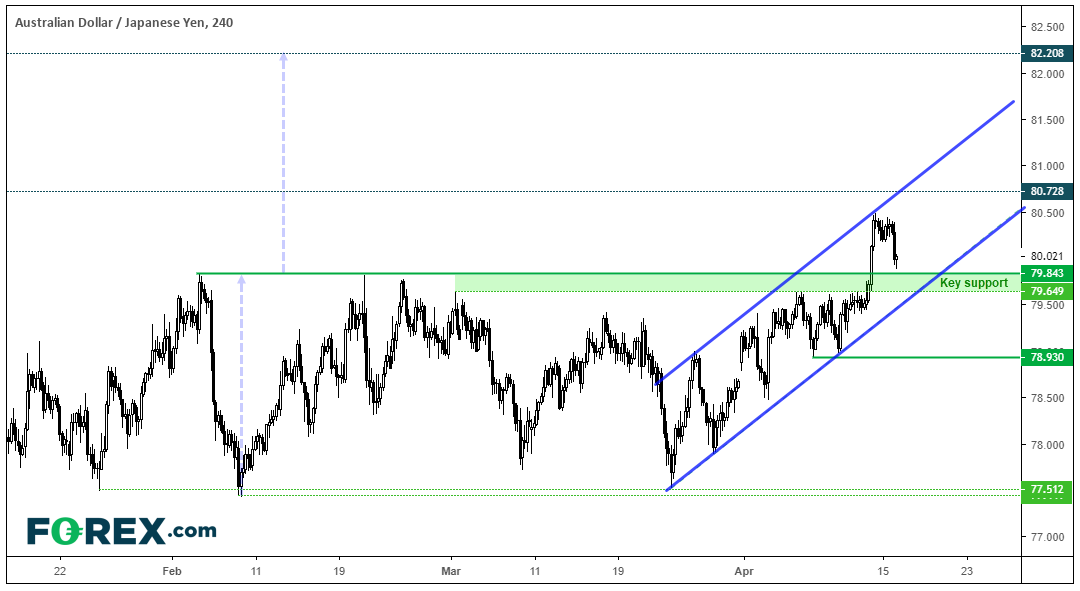 Today’s biggest mover is AUD/JPY, currently trading -0.46% lower. As Matt Weller flagged on Friday, AUD/JPY broke out of its 3-month range and today’s ‘dovish’ minutes has helped the pair retrace towards key support. For now, we’re patiently waiting to see if AUD/JPY can build a base above the original breakout level or, at the very least, hold above the bullish trendline on the four-hour chart. If the trend can hold, 80.73 is a likely interim resistance level, before the 82.20 highs come into focus as part of a 230-pip measured move from the prior range.

AUD/USD struggled to re-test 72c ahead of the minutes, and today’s reaction has driven it back below the December trendline. Trading the daily timeframe has proven to be ricky, with most sessions switching direction and ranges overlapping (the opposite qualities we want from a decisive move). Therefore, whilst AUD/USD may have seen an interim top on the daily chart, momentum may be more favourable to intraday traders. Given the choppy nature of price action on the daily, we don’t think it’s a market to outstay ones’ welcome on, although 0.7110 support could provide bears with near-term target.