Fears over a recession continues to drive financial markets, with commodities feeling the heat

Fears over a recession continues to drive financial markets, with commodities feeling the heat. Volatility thus remains high despite a quiet day for European data. FOMC meeting minutes, due later, could reveal an even more hawkish Fed than priced in.

Fears over a sharp slowdown has been reflected for example in copper, widely considered an economic bellwether, sinking to its lowest level in almost 20 months. Worries that a recession would dampen industrial demand has also hit silver and as we saw yesterday, crude oil, which dropped about a huge $10. Yesterday’s big sell-off was a clear sign that investors are increasingly becoming worried about the destruction of demand from super-high prices of energy and almost everything else. WTI’s breakdown of support at around $105.50 must have triggered some technical selling given the fact that this level had acted as strong intra-day support on a few occasions earlier in the week.  A snow-ball effect was then created when more and more supports broke down – first $103 and then $101. Obviously investors dumping oil this viciously must have been worried about something more than just the breakdown of a few levels on the chart. Recession.

Respite for stocks, but outlook negative

Stocks found some respite with the US tech sector outperforming on Tuesday as yields dropped. But it could just be a pause before we potentially see more losses in this macro environment with central banks undeterred to slow policy tightening. We remain bearish and the markets in “sell-the-rip” mode.

US dollar King of FX: Parity calls grow for EUR/USD

The greenback has reached its highest point since 2002 against a basket of foreign currencies, driving by weakness in the EUR/USD which has dropped to its lowest since… yes, 2002.

It looks like the market is confident that the Fed tightening cycle will probably withstand recession more robustly than some other regions of the world, not least Europe. We will likely see further strength in USD until something changes fundamentally. Will the release of FOMC minutes trigger a sharp slump in EUR/USD to parity today?

The EUR/USD is now just 200 pips shy of dropping to parity. The EUR/CHF has already done it.

BoJo: I will keep going

Across the Channel, the pound has been pounded as it considers making a move below 1.19 handle. The political situation in the UK is in a state of turmoil. Boris Johnson seems like he’s a goner with ministers quitting left, right and centre. Yet he’s determined to continue. He told lawmakers that he would “keep going.” The fact that sterling has largely ignored the shenanigans on Downing Street suggests investors are confident that business-friendly Conservatives will remain in power with or without BoJo.

Watch out for ComDolls as crude and metal prices continue to weaken. The USD/CAD moved above the 1.30 handle yesterday and now it may experience a new wave of technical buying above this level. 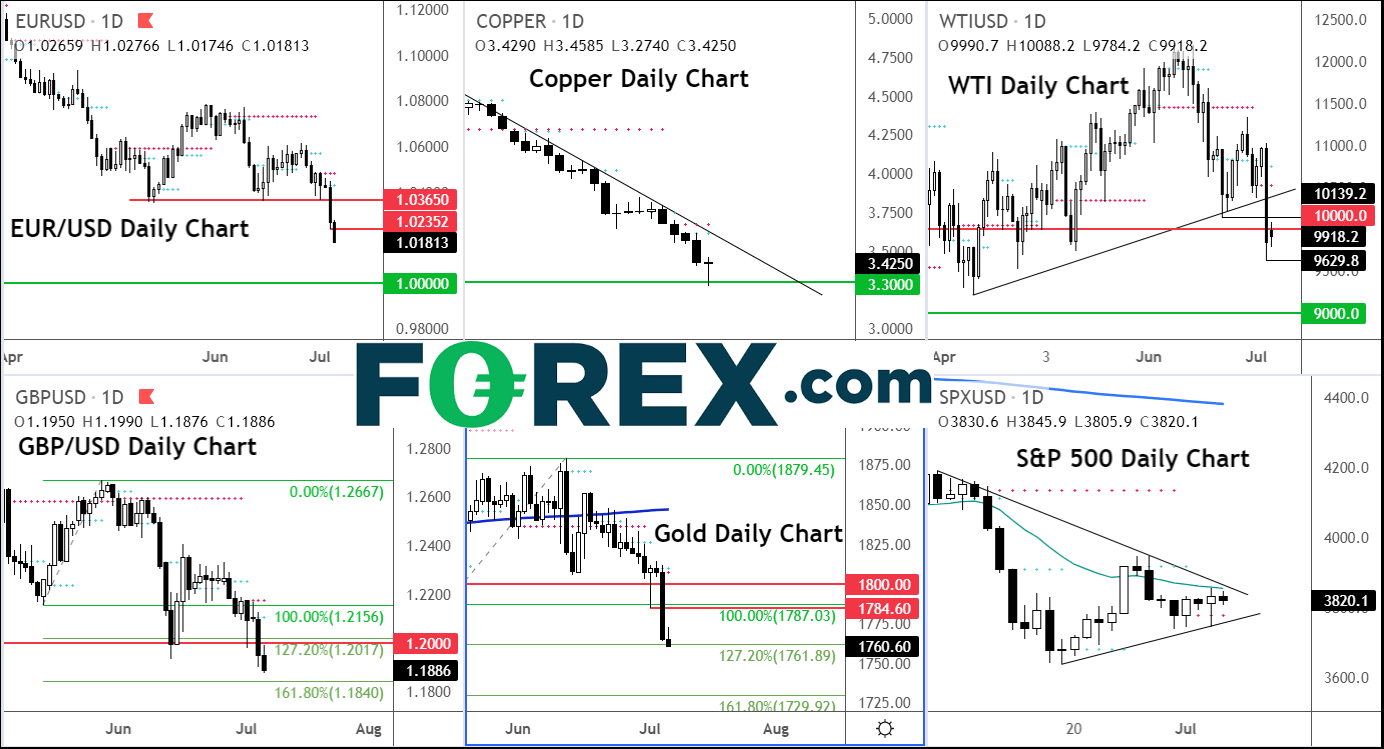