At the time of this writing, the markets in Europe are higher across the board despite a 5 per cent drop in China overnight, while US index futures are trading a touch weaker following yesterday’s sharp recovery. Britain’s FTSE 100 was the top performer, up a cool 2 per cent, thanks in part to a 10 per cent jump in shares of Lloyds and RSA following their earnings results. Miners and energy companies were trading higher due to yesterday’s sharp recovery in the price of oil and metals. Brent crude oil was holding its own around the $34 handle while WTI was at $32. Both oil contracts have recovered nicely following Tuesday’s drop, which was triggered by damaging comments from oil ministers of Iran and Saudi Arabia and after the American Petroleum Institute reported a sharp build in US oil stocks. However, the official supply data from the US Energy Information Administration, published yesterday, showed a different picture, with the 3.5 million barrel build in oil inventories being half the amount the API had estimated the day before. While a build is not normally good news for crude oil, prices rallied nonetheless as traders unwound their short positions they had accumulated the day before.

However, neither oil nor equity indices have broken out of their recent ranges yet. So it remains to be seen if the markets will be able to push further higher from here. But the charts of the major US indices, such as the S&P 500, suggest we me see the recovery extend for a while, possibly without the help of a corresponding rally in oil. Though that would help, stocks and oil could decouple at any time, as they have different macro drivers affecting their prices. The falling and record low government bond yields, combined with the lack of further sentiment-sapping news, means yield-seeking investors are left with little choice but the equity markets. That being said, sentiment could turn sour very quickly and the latest drop in Chinese markets underlines those concerns.

On Monday we highlighted the significance of the resistance in the 1945-1950 range, where a number of technical indicators converged, including the top of the recent range and the 50-day moving average.  We noted that the last time the index had tested this particular moving average was at the end of last year, which preceded that big drop. Since then, the 50- has moved below the 200-day average to create a so-called "death crossover."  When the averages are in this particular order, some trend followers tend to sell on rallies rather than buy the dips. As it turned out, that is exactly what happened, which saw the S&P eventually drop for a time to below our highlighted pivotal level of 1900 yesterday.

However, the buyers stepped in around the 1900 level and they successfully defended the shallow 38.2% Fibonacci retracement against the recent lows. The resulting rally helped to create a very large bullish candle on the daily time frame. But yet again, the bounce stalled at just below the aforementioned resistance range, with the 50-day moving average, at 1938, providing a ceiling.

The good news is that our levels are now well defined and that should hopefully make trading a bit more predictable going forward. So, we have a key short-term resistance area at 1945-50 and a key short-term support at 1890-1900. While the index is contained within this range, the bias remains neutral. But the shallow pullback and the sharp rebound yesterday both point to a potential break higher. This view is further supported by the significant false break reversal pattern that was formed at the lows earlier this month, and the corresponding sharp rally since. On top of this, some of the shorter-term and fast-moving exponential moving averages (not displayed on the chart) are now pointing higher because of the size of the rebound and also the amount of time the index has spent above the recent range lows. So, some of the bearish characterises that were relevant previously are now less relevant.

The bulls will now want to see a clean break above the 1945-1950 range. If achieved, then there is just thin air until the next key resistance zone around 2000-2010. This is where previous support meets the 61.8% Fibonacci retracement level. So there is a possibility for a sharp rally to look forward, potentially as early as today.

But we can’t stress enough that the long-term technical outlook is still bearish, so be wary of false breakouts. If the chart only contained the 50- and 200-day moving averages, you will have noticed very clearly that they are both pointing lower and sit in the wrong order. For that reason, any potential rallies should be seen as a counter-trend move, for now. So when it comes to trading, the bulls should continue to remain nimble. Indeed, if the S&P moves back below the 1890-1900 support area then the short-term outlook would turn bearish once more. In this potential scenario, the next stop for the S&P may well be at the 61.8% Fibonacci retracement level of 1860 or even the long-term support area around 1820-30. 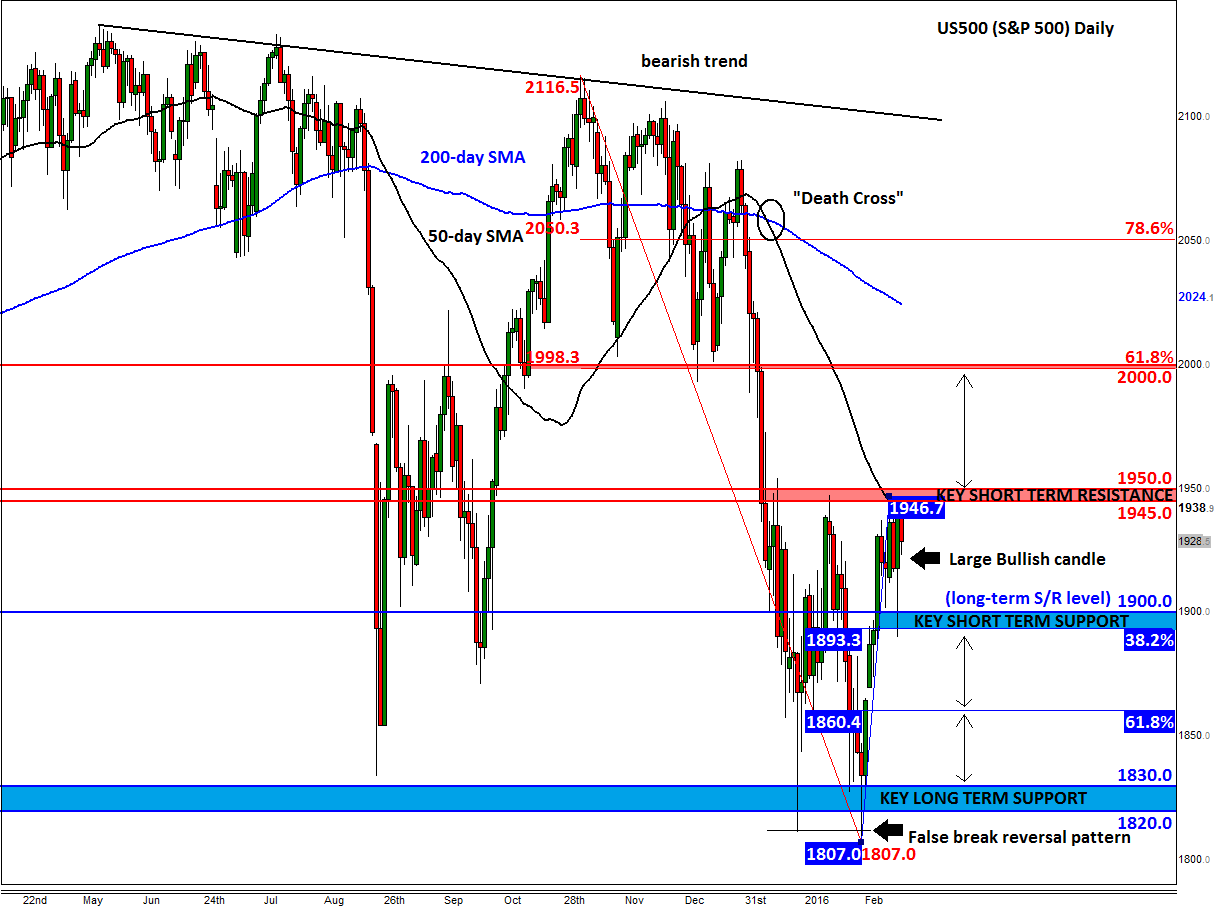