Ahead of next week’s talks in Algeria, Reuters reported this morning that Saudi Arabia is apparently willing to reduce its oil output for as long as Iran agrees to freeze its production at current levels.

Ahead of next week’s talks in Algeria, Reuters reported this morning that Saudi Arabia is apparently willing to reduce its oil output for as long as Iran agrees to freeze its production at current levels. Reuters cited three unnamed sources behind this story, but so far there has been no official confirmation or denial. On the surface, this appears to be a major compromise from Saudi Arabia. But the truth is, there won’t be any real sacrifice from the largest OPEC member. A small cut in oil production would be like a drop in the ocean for Saudi, especially when you consider the prospects of higher crude prices as a result of a potential deal. What’s more, domestic demand for Saudi oil tends to drop in the fourth quarter anyway due to the lower temperatures.

So, Saudi Arabia is being really clever here, and Iran might not like that. However, it may nevertheless agree to the deal anyway. At around 3.6 million barrels per day, Tehran’s current oil production is near the 4 million bpd target that it had previously stated was a precondition for discussing output limits. Being this close to their target, Iran would probably be better off to sell a little bit less oil for a potentially higher price than a little bit more for a lower price.

Therefore, while as ever I am a bit sceptical about these reports, especially when anonymous sources are cited, if it turns out that the offer has actually been made by Saudi Arabia then I would expect Iran to accept it, even though it would probably suit the former more. But more importantly, it is what the markets think might happen, not me. So far, the jump in oil prices has not been sustained, which is a fair reaction one could argue. However, if there is an official confirmation of the offer then oil prices could rise a little bit further in the short-term. Ultimately, for oil prices to make a significant move in one or the other direction it will be dependent on the outcome of the talks: a deal to freeze production should give oil prices a significant boost while if there is no deal then expect to see a big drop, at least in the short-term anyway.

Reflecting the uncertainty going into next week’s oil meeting, the daily chart of Brent shows that crude is coiling inside the converging trend lines and around its flattening 50-day moving average. When prices coil this way, usually big moves follow. While there is little point in speculating which direction the potential breakout will likely to be, I am leaning more towards the upside than downside given the generally bullish price behaviour for much of this year. 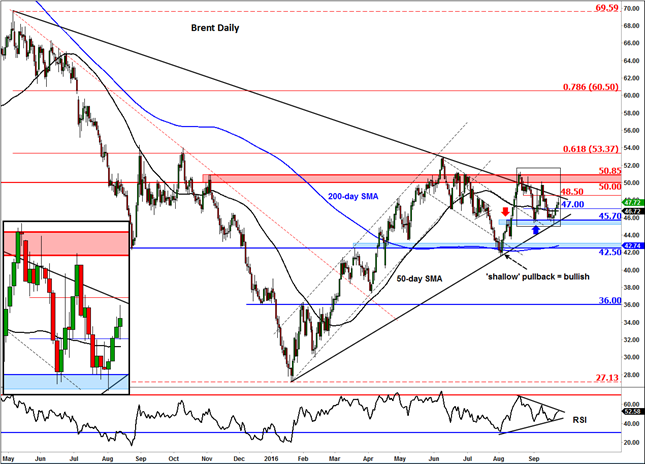