I am still of the view that the dollar could weaken this year and boost buck-denominated metal prices.

As mentioned yesterday, I am still of the view that the dollar could weaken this year and boost buck-denominated metal prices. After all, the Fed has stopped hiking interest rates. You would think this would be good news for noninterest-bearing and low-yielding assets, such as gold, silver and copper. On top of this, we think equity markets could weaken again soon because of concerns over growth and the potential for softer earnings outlook from corporate America. If equities were to correct themselves again this should help to keep haven assets underpinned. Meanwhile the potential for a positive outcome in the trade talks between the world’s largest economies should help to boost demand for commodities, including gold and silver further. Indeed, the grey metal’s recent recovery is at least partially due to hopes over increased demand for its industrial uses given the raised prospects of a US-China trade truce.  Copper has recovered for the same reason.

However, all that being said, one of the key risks to this bullish outlook is this: Although the Fed may have stopped hiking, the rest of the major central banks out there are in no rush to raise interest rates. So, there is no real alternative currency that yield-seeking investors will be piling into just yet apart from the dollar. Therefore, the greenback could remain supported for a while yet, and limit the potential gains for gold and silver.

That could change, however, if and when there is real progress made on Brexit to allow the Bank of England and, to a lesser degree, the European Central Bank to tighten their policies. Only then could the Dollar Index start to break down more aggressively, boosting the metals’ prices as a result.

Still, silver has already started to exhibit bullish characterises again in recent times. Admittedly it hasn’t moved much over the past week and a half, but this could be a “good” consolidation, ahead of more potential gains. Interestingly, the metal has not given up much of its recent gains despite the dollar staging a sizeable comeback, suggesting silver is showing relative strength. We therefore expect supports to be defended. The next levels of potential support below market are around $15.20 and $14.85, levels which were formerly resistance.

There is obviously the potential that silver may not get to these levels before taking off again. So, watch price action closely around $15.50. This was the low made last week, when the metal formed an inside bar price candle on its weekly chart. So, if the low from last week breaks, which it has, and silver refuses to go down, then this would point to a potential bear trap situation. Thus, if silver now starts to go back above $15.50 and show bullish characteristics on the smaller time frames then the motion towards the high of last week could begin, so watch out for that possibility.

Meanwhile the bears would argue that with the long-term downward-sloping trend line still in place and the fact that the metal has been putting in lower lows and lower highs for a number of years now, that the trend is still bearish. As such, they argue, that speculators would be better off looking for bearish patters to emerge around resistance. While a sell-off is obviously something we can’t rule out, we would prefer to look for such an outcome around more significant resistance levels and at a time when the Fed starts to turn hawkish again. 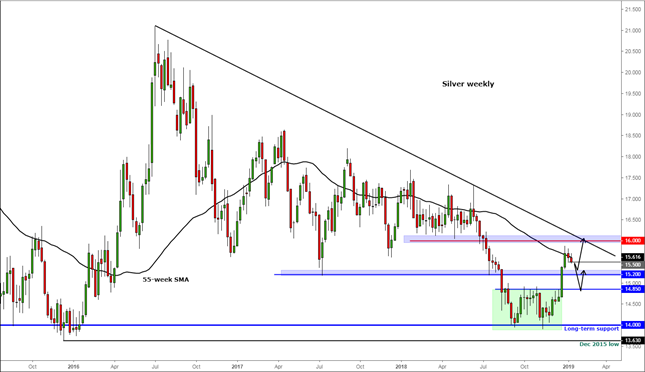