The Bank of England delivered a dovish hike today, as it is concerned about a squeeze on household incomes.

The Bank of England gave markets what they were expecting and raised interest rates by 25bps from 0.50% to 0.75%, matching levels from pre-Covid.  The vote was 8-1, as Cunliffe voted for no change. He was concerned about how it would affect household incomes. The Committee referenced in its statement that the Russian invasion on Ukraine could accentuate inflation and have an “adverse impact on activity by intensifying the squeeze in household incomes”.  Note that the BOE has stated that once rates reach 1%, it will begin to sell bonds held on its balance sheet.  The BOE had begun to reduce holdings from its balance sheet at the last meeting by not reinvesting maturing proceeds.

The statement also noted they now see inflation around 8% in Q2, vs an expectation of 7.25% in February’s statement. However, the statement noted that further modest tightening “might be appropriate” in the coming months, but there are risks on both sides of that judgement.  This was changed from the February statement, which read “likely to be appropriate”.  Because of the expected increase inflation, the Committee noted that growth is likely to slow for countries that are net energy importers.  As a result, it only expects Q1 GDP to rise by only 0.75%.

GBP/USD had been slowly rising from 1.3000 on Tuesday to a high just before the statement release of 1.3211.  However, as the statement was viewed as more dovish, markets took the opportunity to “sell the fact” and push the pair almost immediately down to 1.3088. 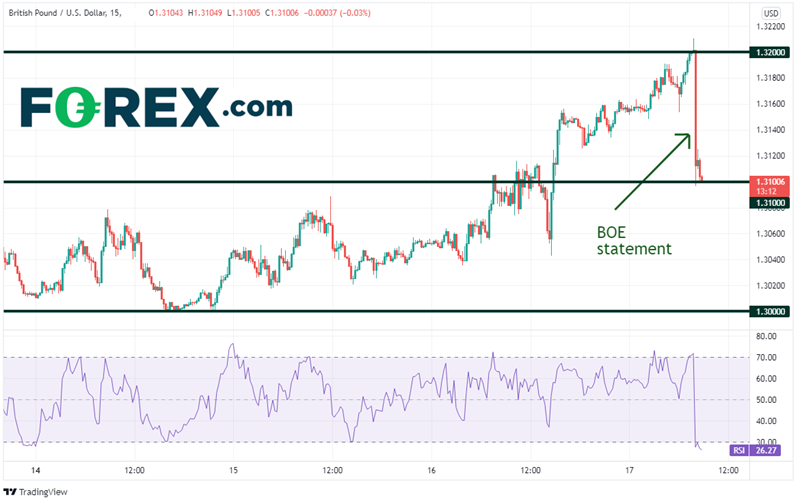 GBP/USD made a high at 1.4250 on June 1st, 2020 and has been making lower highs and lower lows since then.  The pair bounced out of a descending wedge near 1.3160 and traded back up to a downward sloping trendline in mid-January near 1.3749.  GBP/USD pulled back once again and made a new low at 1.3000 on March 15th.  This was also the 127.2% Fibonacci extension from the low of December 9th, 2021 to the high on January 13th and psychological round number support. 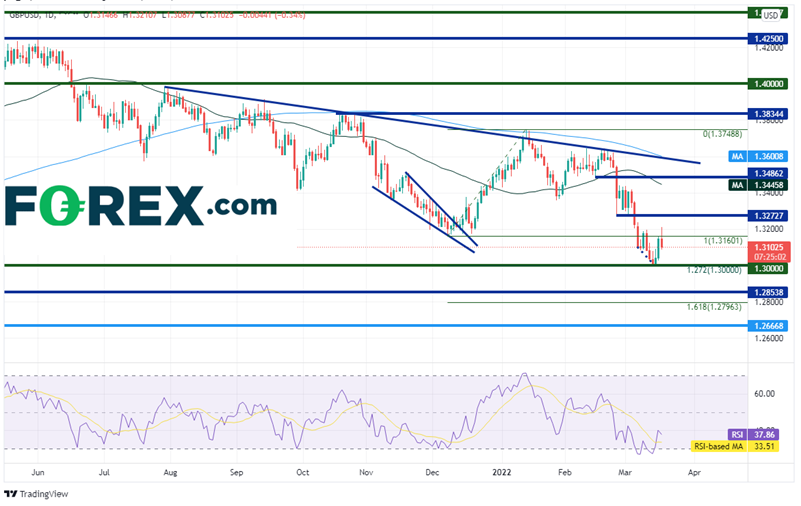 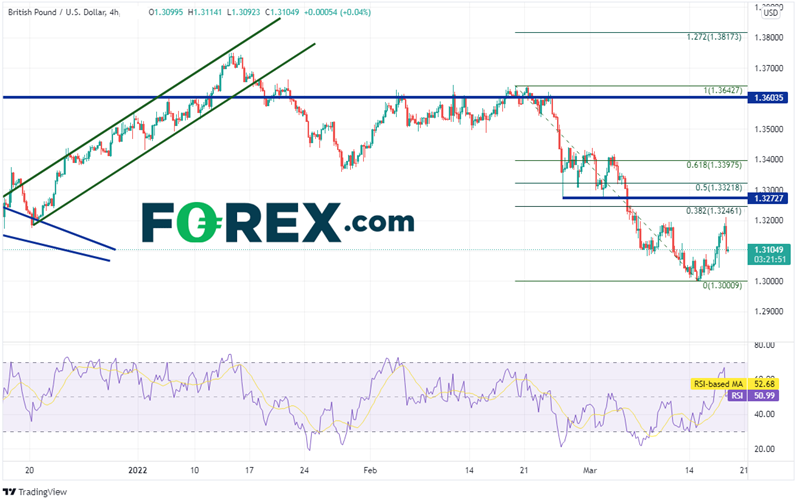 The Bank of England delivered a dovish hike today, as it is concerned about a squeeze on household incomes.  However, the BOE will have to tread a fine line if it is to continue with this wording as it tries to fight off rising inflation.