Slow start to a busy week in the markets

The markets have opened relatively quietly at the start of what promises to be a very busy week in terms macroeconomic events.

The markets have opened relatively quietly at the start of what promises to be a very busy week in terms macroeconomic events. At the time of this writing, European stock indices were higher and US index futures were pointing to a slightly firmer open on Wall Street later on. In FX, the EUR/USD was consolidating above the 1.17 key level, GBP/USD was holding its own above 1.31, while the USD/JPY was clinging onto key support at 110.35. Gold has started a touch weaker after closing up for the third straight week, while copper and crude oil were also in consolidation mode following their sharp recent gains. Commodity currencies were thus a touch weaker, led by the Canadian dollar, as both crude oil contracts tested the waters above their respective 200-day moving averages.

In this busy week some of the key questions investors will be asking themselves will include: (1) will the US dollar depreciate further, (2) can the commodity rebound continue and (3) will US stock indices print new all-time highs? In a way all these questions are at least partially linked to the market's view about the path of interest rates in the US. The delay in the implementation of Trumponomics and recent soft patch in US data has weighed on inflation and growth expectations at the world’s largest economy. This in turn has led to the market pricing out an aggressive rate hiking cycle from the Fed. The dollar has responded by going down, which in turn has boosted buck-denominated commodities while US stocks have benefited from not only a weaker currency but also from expectations of a relatively slower interest rates rises. This week's release of key US economic data could provide answers to some of these questions.

As we look forward to a new month, the US dollar is on track to end lower for the fifth straight month. This is the greenback’s longest losing run since April 2011. But with much of the bad news in the price, could the dollar bounce back soon? If it does, it would most likely be against weaker currencies. In fact, against the Swiss franc, which has been the weakest among G10 currencies owing to a dovish SNB, the dollar has already started to push higher. But it may struggle to do so against the likes of the euro, for example. The single currency has been supported by strong Eurozone data which has raised speculation that the ECB may turn hawkish soon. This morning though, the Eurozone July CPI came in unchanged at 1.3% year-over-year this morning, which was in line with the expectations. However, core CPI rose to 1.2% from 1.1%, while the unemployment rate unexpectedly fell to 9.1%, its lowest level since February 2009, from 9.2 per cent previously. What’s more, German retail sales jumped 1.1% in June vs. +0.1% expected. This was the best monthly gain in retail sales since October 2016.

So, overall, today’s Eurozone data was strong. Despite this the EUR/USD showed very little reaction, though it remained above the old resistance at 1.1710, which is now the key support level to watch. While above here, the short-term bias remains bullish for the EUR/USD. Looking ahead, chief among this week’s major events will be the US jobs report for July on Friday; this will be released after we have had a slew of PMI numbers from around the world and key central bank decisions from the Bank of England and Reserve Bank of Australia. 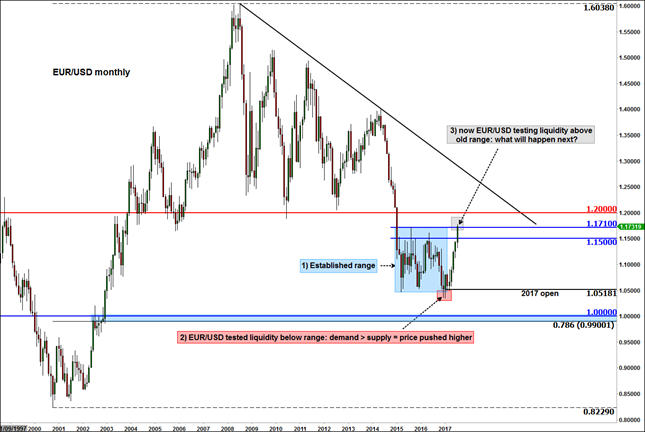