Equity markets have wobbled a little after initially extending their gains in reaction to the dovish FOMC meeting minutes last night. Stock markets participants have been left a bit disappointed with the lack of a clear breakthrough in trade talks between the US and China, after a three-day meeting merely laid the foundation for a potential deal in the future.

Equity markets have wobbled a little after initially extending their gains in reaction to the dovish FOMC meeting minutes last night. Stock markets participants have been left a bit disappointed with the lack of a clear breakthrough in trade talks between the US and China, after a three-day meeting merely laid the foundation for a potential deal in the future. With US earnings season upon us, and given concerns over the global economy, don’t be surprised if the major stock indices start to decline again as they approach key technical resistance levels, despite the outlook for US interest rates to remain around their current levels throughout the year.

As my colleague Matt Weller noted yesterday, policymakers at the Federal Reserve had indicated in the December meeting that monetary policy will be increasingly flexible and “data dependent” moving forward and that the balance sheet reduction is not on autopilot, as many traders had previously feared. The minutes seemed more dovish than the Fed Chair Jay Powell had come across at his press conference at the conclusion of that meeting last month. But the fact that the stock markets could not hold onto their gains overnight despite this comes as no surprise. After all, Mr. Powell had already watered-down rate hike expectations when he spoke last week. So, the minutes revealed information that was already expected and therefore priced in.

On top of a dovish Fed, the other major reason stocks had rebounded strongly in recent days despite concerns about a recession in Germany, weakness in global growth and Brexit uncertainty – to name but a few risks facing investors – was due to optimism surrounding trade talks between China and the US. The three-day talks between officials from these two nations have now concluded. Both sides have carried out “extensive, in-depth and detailed exchanges” on trade and structural issues of mutual concern, according to a statement released by China’s Commerce Ministry. This now paves the way for further discussions to take place between US Trade Representative Robert Lighthizer and China’s Vice-Premier Liu He. While the statement stressed that both nations have agreed to maintain close communication, it provided few other details. So, it remains to be seen whether and what type of an eventual deal will the two largest economies reach in the coming months.

As well as the above fundamental considerations, let’s not forget the technical considerations when it comes to figuring out the next big directional move for stocks. The impressive rebound we have seen off the lows on the major indices has undoubtedly caught many by surprise, ourselves included. But the move may have reached – or about to reach – exhaustion. At the very least a few days’ worth of consolidation should not come as surprise around these levels. In fact, a consolidation here would not necessarily be a bad thing for the indices as it would allow short term momentum oscillators to work off their “overbought” conditions through time rather than price, giving momentum-chasing bullish traders the opportunity to reload when they are no longer “overbought”. However, if instead of a “bullish consolidation” we see a sizable breakdown around the major indices’ current resistance levels then the bulls would need to be very careful. After all, we have seen two massive monthly red candles in the past three months and a bit for the major indices. It could be that a lot of trapped investors who failed to close out their bullish positions in the previous months, may want to do so now given this opportunity ahead of the upcoming US earnings results.

For stock market bears, on the other hand, the wait continues. So far, we haven’t seen a clear bearish signal in this phase of the rebound to suggest the selling is about to resume. But we certainly are on the lookout and will be monitoring the indices closely around these levels for any bearish development. If the below was a 5- or 60-minute chart, you wouldn’t be so bullish on it, given, for example the fact it has broken below its 12-period moving average after the fakeout above the previous high, not to mention the first major lower low in a long time. But this is not a 5- or 60-minute chart; it is the MONTHLY chart of the Dow Jones Industrial Average. 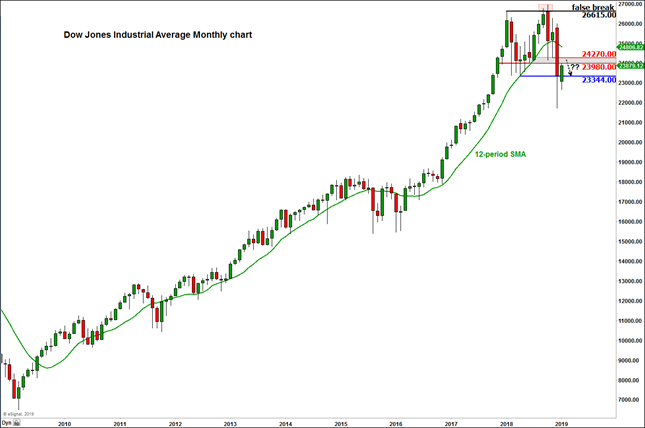