Sentiment among investors continues to remain downbeat owing to a number of global factors, not least trade fears. But I believe that the number one concern for stock market bulls is concerns over rising borrowing costs.

The recovery in the stock markets could not last long and by the close of play yesterday all of the earlier gains evaporated. Although equity indices opened higher in Europe this morning, they have since turned mixed with shares in Germany falling and UK remaining positive. US index futures were still slightly positive at the time of this writing, but should Europe turn decisively negative, I can’t see why Wall Street wouldn’t follow suit.

Sentiment among investors continues to remain downbeat owing to a number of global factors, not least trade fears. But I believe that the number one concern for stock market bulls is concerns over rising borrowing costs. After all, it was low interest rates and QE that supported the stock market rally for all those years post the financial crisis. Now that the monetary support from the likes of the Federal Reserve is being withdrawn, some investors are undoubtedly finding it extremely uncomfortable justifying buying stocks at these extremely high levels.

The Fed has already raised interest rates twice this year and is planning to tighten its belt another couple of times before the year is out. While the likes of the Bank of Japan are still there to pick up the slack, the European Central Bank has indicated that its asset buying programme will come to an end before the start of 2019, while the Bank of England looks set to raise interest rates later on this year, possibly as early as August.

Central banks are and have been turning hawkish because the global economy looks a lot healthier compared to those gloomy days post the financial crisis: GDP is expanding, unemployment is falling and crucially inflation is on the rise, too, now.

Meanwhile with oil prices remaining bid after the OPEC’s latest meeting, fuel prices could rise further and lead to inflation overshooting expectations. That in turn may lead to central banks hiking rates more aggressively in the coming months.

Indeed, the charts of the major stock averages like the S&P 500 future here show that the struggle is real for the stock markets. Since that breakdown in February, the S&P has struggled to stage a sustained rally and had failed to climb above the pivotal 2790 level. While the index is yet to put in a lower low and is still sitting above its 200-day average and trend line, another sell-off is looking increasingly likely judging by recent bearish price action.

Yesterday saw the index gave up its entire gains to turn red on the day, printing a large bearish engulfing candle on its daily chart. This formation is usually very bearish as its name suggests and if there is some real follow-through in the selling pressure today then we could see further long-side liquidation in the days to come.

The next levels of potential support come in around the trend line at 2686, followed by the 200-day average at 2667 and then at just below 2635, which marks the head of a hammer candle that hasn’t been re-tested yet. Short-term resistance is seen at 2718, the low from Tuesday.

This short-term bearish outlook would become invalid in the event the S&P climbs back above yesterday’s bearish engulfing candle i.e. at 2748. 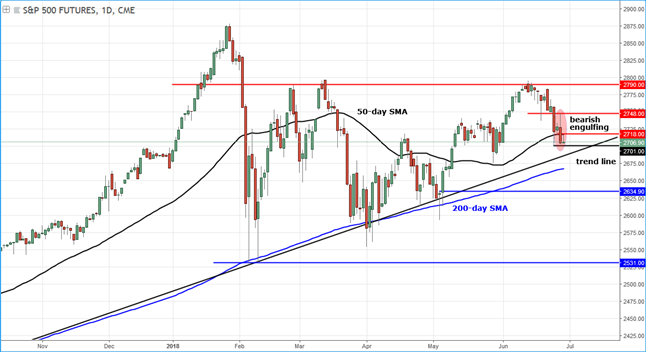