The early bounce was losing some steam at the time of this writing, however. As we approach the US open, the dollar was rallying again and government yields had bounced off their lows. Could this be another ugly day on Wall Street, or will it be a reversal Tuesday?

After yesterday’s massive declines in the stock markets, Asian equities started Tuesday’s session sharply lower but the buyers stepped in shortly afterwards and this ensured some Asian markets such as Japan’s Nikkei would close significantly off their worst levels. European and US index futures recovered, too. So, when trading resumed in Europe this morning, the markets were already on the way up, although still nowhere near yesterday’s close. That early bounce was losing some steam at the time of this writing, however. As we approach the US open, the dollar was rallying again and government yields had bounced off their lows. Could this be another ugly day on Wall Street, or will it be a reversal Tuesday?

It is not uncommon in bear trends to find sharp counter-trend moves that ultimately fail to sustain themselves. So today’s bounce back may not sustain itself. But are we necessarily in a bear trend now? That’s the million dollar question. If you look at a monthly chart of the Dow, for example, then the recent falls are like a drop in the ocean. But the shorter term charts would have you think that the top is in. Given the size of and the manner in which the markets have sold off, I have a feeling this is not the end of it. Sentiment has surely been damaged after the Dow lost more than 1100 points or 4.6% yesterday, which was its biggest loss in six years. A lot of people are still left holding stocks that they had bought at lofty levels, and there is a good chance some of these people will want to unload their holdings when they have the opportunity to do so and at the best price possible. So, what we may see going forward is people selling their stocks on bounces if they fear that the uptrend is over.

But it is very interesting that the markets have started to fall at a time when the global economy is picking up speed. It is interesting but definitely not surprising. In the aftermath of the global financial crisis, major central banks started doing things no one had imagined before. They bought huge amounts of government debt in an effort to suppress yields and drive investors into higher-yielding assets such as the stock and property markets. This helped to fuel a bubble in the stock markets, which may or may not have popped now. But as central banks unwind their vast holdings of government debt, bond prices could fall significantly further as speculators front-run them. Falling bond prices mean yields would go up, which in turn make other higher-yielding assets such as the stock and property markets, and emerging markets’ currencies, relatively less appealing.

So things are changing. But is it too early to turn bearish on the equity markets? Do bond and stock prices have to go down in unison? What if bond yields go down again or stabilise at these levels? Are equity market participants overreacting? Lots of questions, but only time will be able to answer these. It must be noted, though, that we haven’t had a correction of this magnitude for some time now, so this may end up being a healthy pullback, even though it doesn’t look that way now. But dare I say, we are hopefully going to get a lot more volatility this year as trading in the stock markets becomes a two-way street again. Up until this sell-off, the markets have been going basically in one direction every day, especially in the US.

As a result of the selling, the S&P 500 future has now dropped to test its 200-day moving average, as we had highlighted the possibility on Tuesday of last week HERE. It is perfectly normal to expect a bounce here given the short-term oversold conditions and the long-term bullish trend. However, with the index falling below the 2018 open and prior support in the 2675-2698 range, the market structure has broken down. We now have a lower low in place. So, going forward, this 2675-2698 range may act as resistance. If the index falls below the overnight low again then it is anyone’s guess as to how far we could pullback. The Fibonacci levels are among the bearish objectives, as shown on the chart. 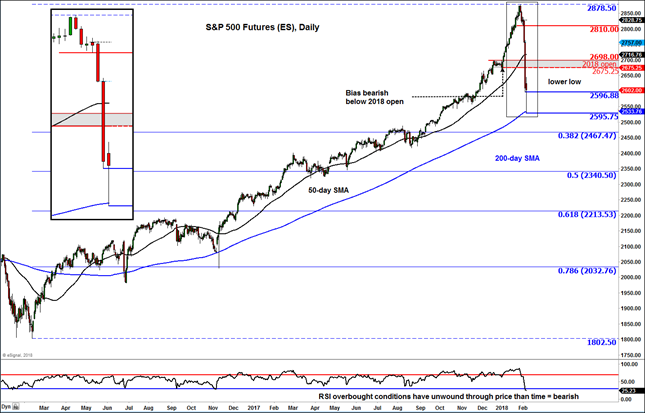 eSignal and FOREX.com. Please note, this product is not available to US clients