<p>There was finally some relief for the bruised bulls last week after the stock markets staged a sharp recovery, raising hopes that the worst ever start to a year is now behind us. The rally was initially triggered by short-covering and a sharp rebound in oil prices, then by renewed dovish talk from the ECB President Mario Draghi. Regardless of the trigger, the rally ensured stocks would close the week in the positive territory for the first time in 2016 and what a relief that was after equities had endured the worst ever start to a year. But was it just that – a relief rally? Will more existing long-term investors use this as an opportunity to exit their positions? Or is this the start of another big rally?</p>

There was finally some relief for the bruised bulls last week after the stock markets staged a sharp recovery, raising hopes that the worst ever start to a year is now behind us. The rally was initially triggered by short-covering and a sharp rebound in oil prices, then by renewed dovish talk from the ECB President Mario Draghi. Regardless of the trigger, the rally ensured stocks would close the week in the positive territory for the first time in 2016 and what a relief that was after equities had endured the worst ever start to a year. But was it just that – a relief rally? Will more existing long-term investors use this as an opportunity to exit their positions? Or is this the start of another big rally?

Hopes that further ECB monetary stimulus may be forthcoming in March has in a way helped to reduce concerns about the economic impact of policy tightening from the Fed. The latter is widely expected to leave its policy unchanged on Wednesday, with a growing number of analysts anticipating that it will deliver a more dovish policy statement given the recent developments in the financial markets. If the Fed does appear to be backtracking from its previously hawkish stance then this may help stocks stabilise further, or at least slow down the declines. Another central bank that could cause gyrations in the markets this week could be the Bank of Japan, which like many other major central banks has failed to get anywhere near achieving its mandates. There is thus the possibility we will see further monetary stimulus from the BoJ on Friday.

Meanwhile the 20% or so rally in oil prices from their mid-week lows is certainly something that cannot be ignored and given how strongly oil and stock prices have been correlating lately this is also a positive development for equity markets. However, the percentage increase in oil only appears significant because it has bounced from a very low base. In nominal terms, the oil price recovery has so far been just been $5 or so. Compare that with the $23 drop from around $50 a barrel in November (let alone $115 in 2014) and one will realise that the recovery merely represents a drop in the ocean. Fundamentally, not much has changed for oil with both global supplies remaining plentiful and growing and the growth in demand likely to slow because of China et al. In fact, crude oil has started this new week on a negative note, so this is not something the bullish equity investors would have liked to see after last week’s rally.

Investors are also digesting US earnings, with the reporting season being in full swing now. Some 15% of the companies in the S&P 500 have now reported their Q4 2015 results. According to Factset, 73% of these companies have reported earnings above the mean estimate and 49% above the mean sales estimate. So, earnings results haven’t been too bad so far, albeit expectations were very low and thus easily beatable. If the likes of Apple (Tuesday), Facebook (Wednesday) and Amazon (Thursday) deliver better results this week, then this could provide some further short-term relief for the stock markets.

In truth however, the direction of crude oil will probably remain the number one factor for equities, especially the resources stocks. Given our still-bearish view on oil, we don’t expect the current stock market rally to last long. But there may be some further bullish momentum still left for stocks after last week’s reversal; so we could see moderately higher levels before another potential drop.

Last week, we highlighted the possibility for a "sharp rebound" when the S&P tested the key 1820-1830 area (see "S&P 500 in bear territory: what now for stocks?" for more).  As a reminder, this 1820-1830 area marks the neckline of the long-term rounded-top bearish pattern, which can easily be observed on a long-term chart. We anticipated a short-covering bounce of some sort here as the index did look severely oversold in the short-term. As it turned out, that is exactly what has happened and the S&P has reached our first bullish target around 1900. But the key question remains: was this the start of a more profound recovery or a mere short-covering bounce from severely oversold levels?

Looking at the daily chart this time, there is not a great deal of decisiveness being displayed at this stage. Bullish traders would take heart from the RSI being in a state of bullish divergence and the fact that the S&P has risen back above the long-term support and resistance line of 1900. The sharp rejection around the 1820-30 long-term support area also points to further recovery in the short-term, or at least some consolidation. However, the bears would point out that despite the sharp recovery at the end of last week, the S&P is still holding below the shallow 38.2% Fibonacci retracement level of the most recent downswing, at 1928. Thus if the selling were to resume here, it would be a particularly bearish sign. Even if the index were to rise further, the near term trend would still remain bearish given for example that we are below both the 50 and 200 day moving averages which are meanwhile in the ‘wrong’ order. In addition, there is also a bearish trend line firmly in place now.

So, as things stand, the bulls will do very well to push the index all the way to the next big resistance around 2000, a level which also marks the 61.8% Fibonacci retracement of the downswing from October’s high. If they eventually lose ground at 1820/30 then expect to see some further big falls (in this case, traders should revisit last week’s long-term charts to see where the next potential support may be). Bullish traders should therefore remain nimble as the underlying near-term trend is still bearish, which means any near-term rallies could be short-lived. 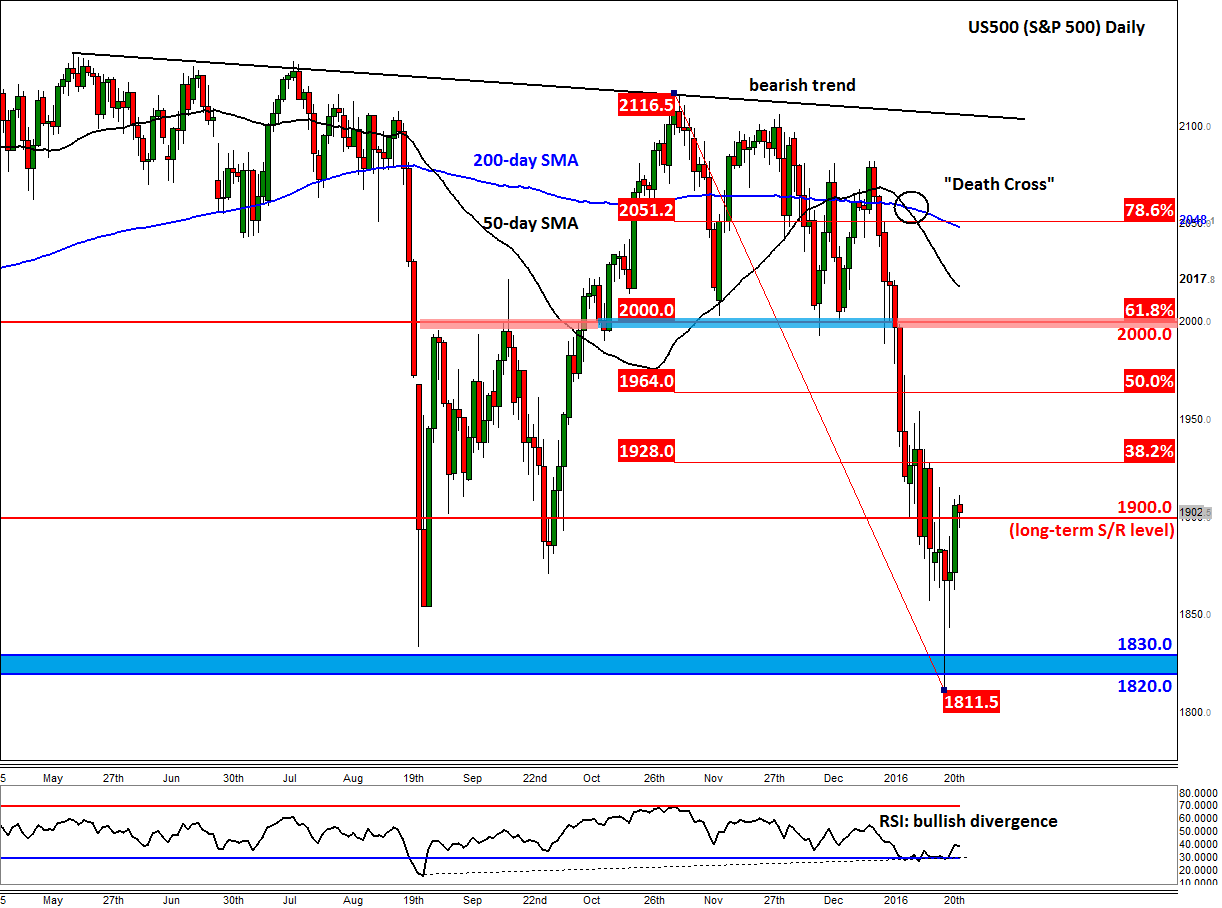