Sentiment in the stock markets continue to improve. One of the biggest sources of support has been the sharp recovery in oil prices which have helped to underpin commodity stocks. Today, Brent oil has reached a new 2016 high of $51, while WTI has climbed above $50 a barrel again. As well as the on-going unscheduled supply outages in places like Nigeria and higher levels of demand, buck-denominated oil prices are helped further by the weakness in US dollar on the back of reduced interest rate hike expectations there. The probability of a July rate rise fell further last night when the Federal Reserve Chairwoman Janet Yellen acknowledged Friday’s poor monthly jobs data and expressed concerns about the consequences of a Brexit vote on US monetary policy. Consequently a rate rise in June is very unlikely now.  In fact, according to the CME Group’s FedWatch tool, the odds for a 25 basis point rate increase in July is now just 25% and 40% for September. The slightly weaker dollar, rising oil prices and the prospects of low rates in the US for longer are clearly positive developments for global equities.

That being said, the potential gains for some European stock markets could be limited until at least the June 23 EU referendum is out of the way. Indeed whereas the major European indices such as the UK’s FTSE 100 and the German DAX remain significantly below their all-time highs achieved last year and despite the ECB’s on-going bond purchases programme, the US averages such as the S&P 500 and the Dow Jones are both just shy of their own record levels now. Preventing these markets from achieving new record highs in the immediate outlook could be Chinese demand concerns which may come back to the forefront should this week’s trade figures from the world’s second largest economy disappoint expectations on Wednesday.

Nevertheless, the short-term technical outlook looks bright for the FTSE 100. As can be seen from the daily chart, below, the FTSE’s last sell-off from around 6425 concluded at 6050, representing a shallow pullback compared to how much it had rallied from 5500 in February. Indeed the sellers were unable to push the index below the shallow 38.2% Fibonacci retracement level against the February low. There was also a potential head and shoulders reversal pattern that failed to materialise. This was another blow for the bearish speculators who had anticipated a drop.

Going forward, a sustained break above 6285 support targets the prior high around 6425, which is also the lower end of the potential resistance range  between 6425 and 6500. The upper end of this range ties in with the 61.8% Fibonacci retracement against the all-time high. Meanwhile a decisive break back below 6285 could pave the way for a re-test of the 50-day moving average and the next potential support at 6215. The bullish outlook would only become invalid if support at 6050 breaks down. 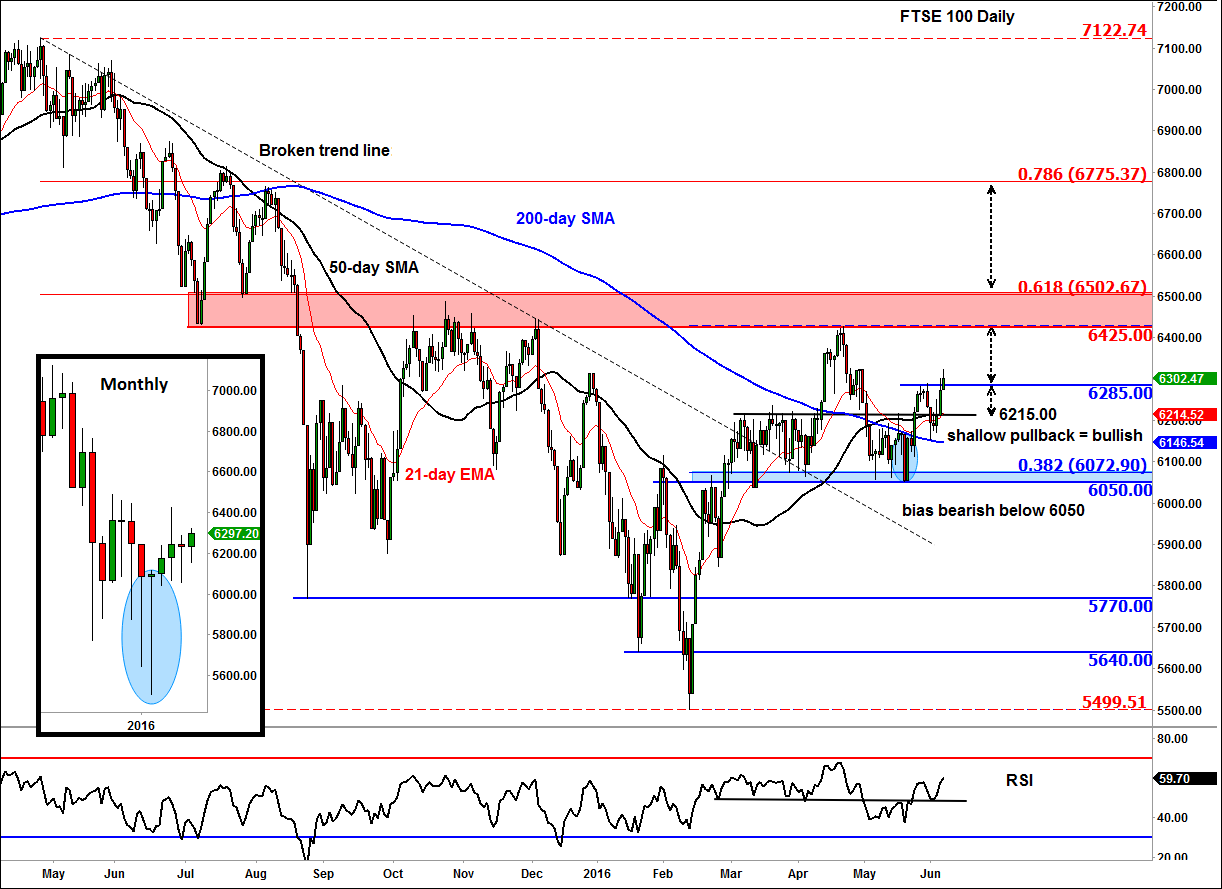