Stocks rally on oil, QE speculation as FTSE tries to break out

European equities have rallied this morning, with traders shrugging off a weaker performance on Wall Street last night and overnight data which showed China’s factory activity weakened to its lowest level since November 2011. In Europe, the latest macro data suggests recovery remains subdued in the Eurozone, although there was some good news for the German labour market. Sentiment in the stock market has clearly been boosted by the recovery in oil and metal prices, which has helped to underpin commodity stocks. On top of this, speculation is rife that the European Central Bank will further expand its monetary stimulus programme at its meeting next Thursday. Hence, benchmark government bond yields have moved further into the negative while the euro has also weakened in recent times. It is no surprise therefore that the markets are once again cheering bad data and ignoring good news.

Indeed, in normal circumstances the Chinese manufacturing PMI figures would have probably caused the stock markets to tank. After all, the official PMI weakened to 49.0, its lowest level since November 2011 and down from 49.4 in January. Meanwhile the more closely-followed Caixin PMI also fell, printing 48.0 for February versus 48.4 in January. Needless to say, both were weaker than expected. A reading below 50 indicates contraction in activity. China’s services sector performed no better as activity slipped to its lowest point since December 2008, albeit it remained above the expansion threshold of 50, printing 52.7.  In Europe, the Eurozone Manufacturing PMI was left unrevised at 51.2, while the UK version slipped to 50.8 from 52.9 previously. Meanwhile the Eurozone unemployment rate unexpectedly fell to 10.3% from 10.4%. In Germany, unemployment fell by 10,000 month-over-month as expected, while the unemployment rate remained at a record low 6.2 per cent.

With commodity prices rising, miners have continued to outperform, lifting the commodity-heavy FTSE 100 by 0.7 per cent at the time of this writing. The top performer on the FTSE has actually been the LSE which has rallied over eight per cent after the ICE said it may submit a takeover bid to rival Deutsche Börse. On the downside, Ashtead was the worst performer with a loss of 12% after its results disappointed expectations, while shares in Barclays fell 10% after it reported a £1.9bn pre-tax loss.

From a technical perspective, the FTSE’s chart is looking constructive. The reversal signal was established in the second week of February when the index fell below the previous low of 5600 but after just one day it rallied back above that level. This was a false break down. Then, the momentum indicator RSI was also in a clear state of positive divergence while the underlying index was creating a Bullish Butterfly pattern, a formation which we highlighted in THIS article. The resulting rally has caused the breakdown of several resistance levels and eroded several other bearish technical indications. For example, the 50-day moving average has now flattened and the index has moved above it. The confirmation for the bullish momentum was given by the hammer candle that was formed around the flattening 50-day MA last Wednesday.

As we go to press, the FTSE was testing a key resistance area around 6120-6150. Here, the 38.2% Fibonacci retracement level against the all-time peak meets the early February high and an established bearish trend line. Given the extent of the rally so far a hesitation here would not surprise me. But the manner in which the index has rallied – strong upward move with minor pullbacks – suggests a breakout is likely now.  A move above the trend line would target 6310/50; this is where the 50% retracement level meets the 200-day moving average. Then there is not much further resistance seen until the 6450-6505 range (previous support/resistance and 61.8% Fibonacci retracement converge here).

Conversely, if the FTSE fails to break above the aforementioned resistance range and the bearish trend line, and forms a bearish-looking daily candle here, then we could see the unwinding of some long positions, leading to a move to the downside in the second half of the week. The key support that needs to break down for the sellers is around 6000-6030. If this happens then the bears would grow in confidence once more, which could see the index resume its downward trend. 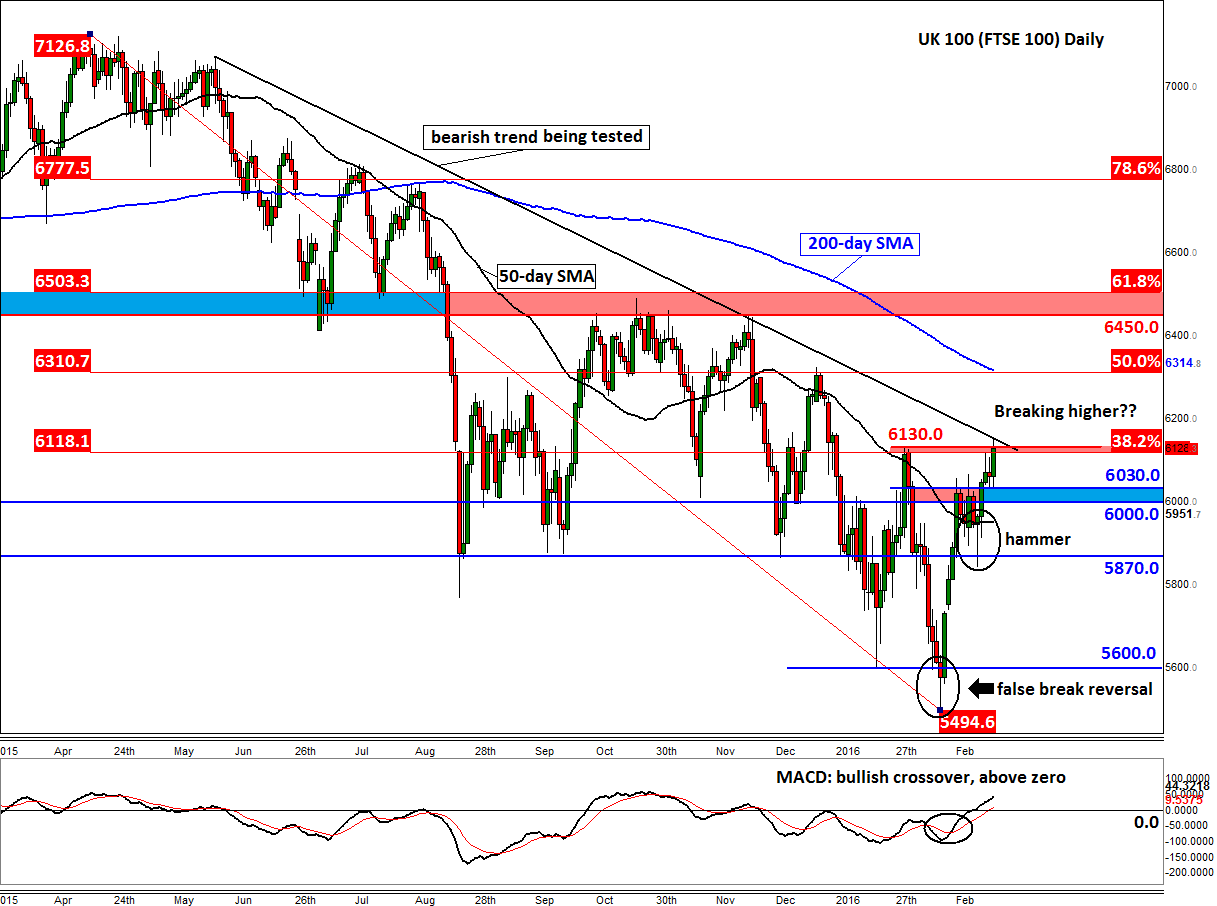