Take a break for AUD/CAD

<p>Today we are looking at the technical outlook of the AUD/CAD – in theory, this FX cross should be immune to the outcome of Britain’s EU referendum and the ever-changing opinion polls thereof.</p>

Want a break from the "Brexit" saga? You are not alone.

Today we are looking at the technical outlook of the AUD/CAD – in theory, this FX cross should be immune to the outcome of Britain’s EU referendum and the ever-changing opinion polls thereof.

There will however be some economic data from both Australia and Canada this week that may help move this pair: the RBA’s last policy meeting minutes on Tuesday and Canada’s monthly retail sales figures on Wednesday. With the Canadian dollar also having strong correlation with oil prices, Wednesday’s release of US oil inventories data may also have an influence on AUD/CAD’s direction.

Turning our attention to the technical side of things and the AUD/CAD’s daily chart is trading around a key juncture near the pivotal 0.9570-0.9605 area, where the previous support-turned-resistance level meets the 50-day moving average and the 38.2% retracement of the most recent sell-off.

With the 50 and 200 day moving averages being in the "death crossover" order (50 < 200), and price residing below these averages, the trend is objectively bearish.  On top of this, one can easily see that price has formed a lower low and a lower high, too.

However, the AUD/CAD’s double bottom pattern, formed in September of last year, around 0.9175, is still valid. What’s more, the AUD/CAD may have also formed point D of a Bullish Gartley pattern in recent weeks when it found support at the area between the 78.6% Fibonacci retracement of XA (0.9370) and 161.8% extension of the BC (0.9317) price swings. The bullish case is supported further by the RSI climbing above its own bearish trend line.

So, the battle is finely balanced, with both the bulls and bears having equally good arguments about the AUD/CAD’s next likely move. Traders can use this indecisiveness to their advantage by finding plenty of good trading opportunities near key support and resistance levels, such as those shown on the chart. 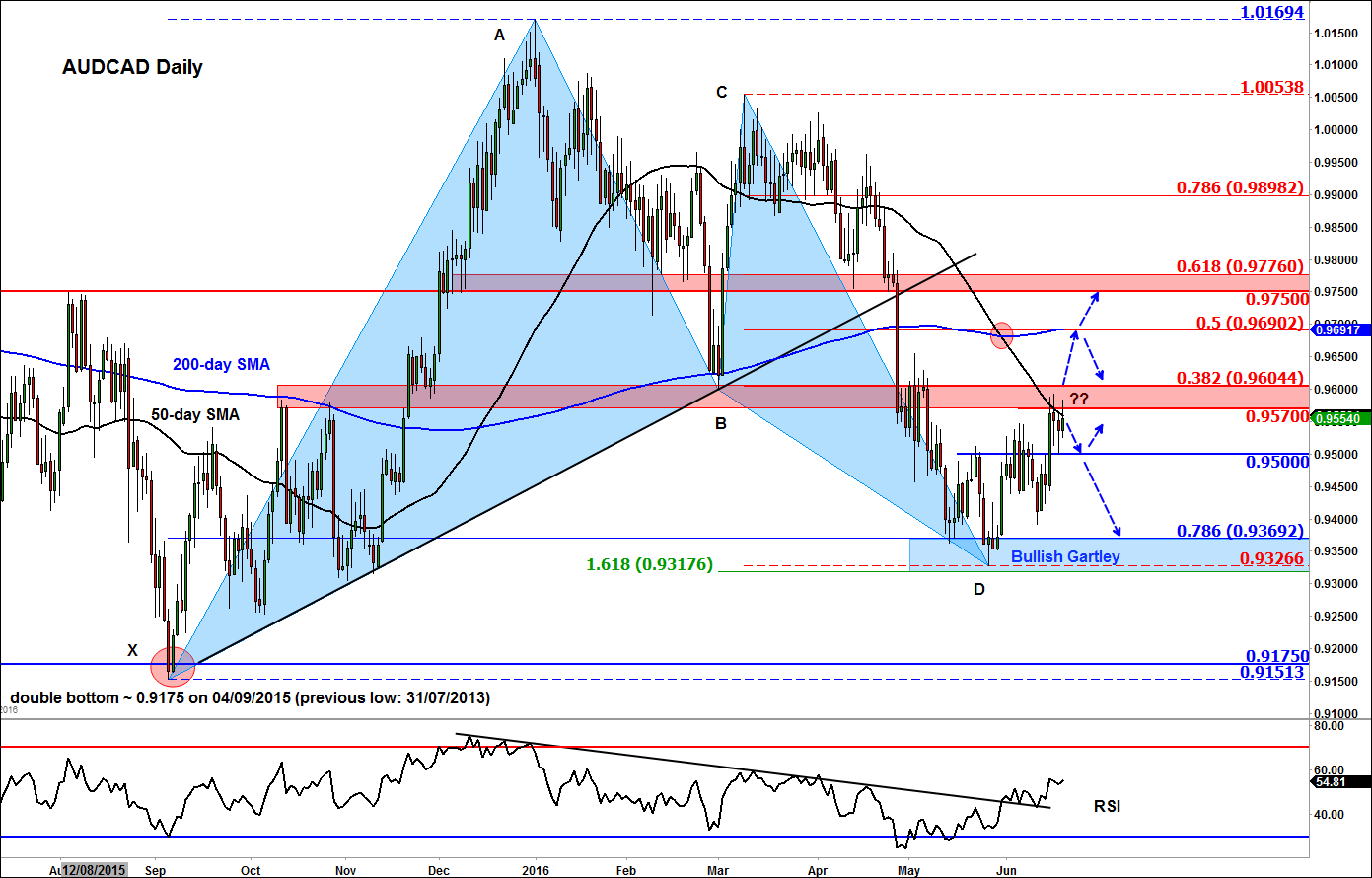