Technical analysis on some of the most interesting markets right now

In this week’s edition, we are getting technical on the DAX, GOLD and AUD/NZD. So, there’s something for everyone.

Like many other global indices, the DAX has struggled to sustain any attempts to rally. Unlike before, the global central banks are now in a tightening phase, and this is discouraging investors from holding overvalued stocks and other assets. There are many other risks to consider as well, not least a slowdown in China where authorities have been putting large cities into lockdown to curb the latest wave of covid.

Traders on the other hand have been evidently happy to sit on the offer at resistance. As a result, we are continuing to see lower lows and lower highs form on the major indices. Insofar as the DAX is concerned, there is also a bearish trend line that has been formed, which has continually offered resistance to any bullish attempts. Equally significantly, the 21-day exponential moving average has been trending lower, providing a ceiling to the DAX on multiple occasions. 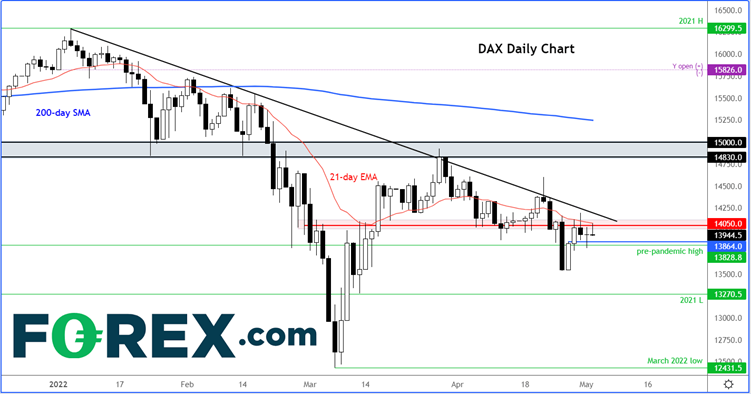 Specifically, it looks like the DAX is having a tough time around 14050. This level has acted as both support and resistance in the last couple of months on several occasions. But we are back below it today and also underneath the 21-day. In other words, the short-term technical bias is again bearish and will remain that way until and unless the DAX breaks cleanly above this area of resistance.

The precious metal has been far from being so precious in these high inflationary periods. Instead of acting as an inflation hedge and rally, it has fallen along with all other dollar-denominated commodities. Rising bond yields have also weighed on the price of this and other non-interest-bearing commodities.

Gold’s breakdown below $1900 support was an addition blow to traders and investors alike, who were hoping that the metal could bottom out there. But all hope is not lost. The yellow metal is still holding its own above the technically important 200-day moving average, which comes in around $1835.

In fact, gold may be heading to a very important area of support, in this busy week of central bank action, with the Fed and BoE still to come. Specifically, the area around $1830 is significant because several technical factors converge here. As well as the 200-day average, we have a bullish trend line meeting the point D of an AB=CD price projection, and the 61.8% Fibonacci retracement against the rally from August. 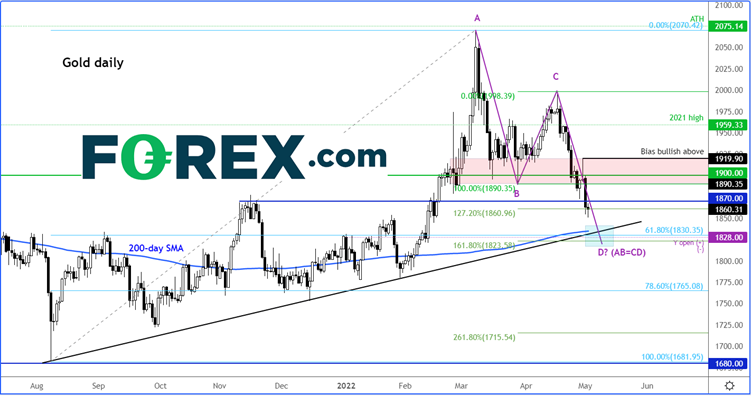 If gold were to drop to the above zone, we would then like to see a sharp reaction that could potentially lift the price of gold back to former levels of support and resistance such as $1870 or $1900. If we don’t see such a reaction, then we wouldn’t rule out the potential for a much deeper correction.

Regardless of whether gold gets to that $1830ish area, the short-term bearish bias would end in the event of a rally above Friday’s high near $1920, for that would create a higher high on the chart of gold.

The AUD/NZD broke to its highest level since 2018 overnight after the Reserve Bank of Australia raised the Cash Rate by 25 basis points to 0.35% instead of 15 bps expected. The RBA governor Lowe has said that the economy has a lot of positive momentum, and that it can weather fairly small rate moves. The trend was already bullish on the AUD/NZD prior to this latest breakout, as highlighted for example by the rising 21-day exponential moving average on the chart. But today’s breakout means fresh buyers will now be encouraged to step in on any short-term dips, potentially providing new energy for the currency pair to move to fresh multi-year highs in the days and weeks ahead.

The breakout has also seen the AUD/NZD take out a key level of resistance around 1.10, where it had previously run into trouble on multiple occasions. But the market is curious, and it will likely come back down to re-test 1.10 from above in the near future. It is now imperative that that breakout holds above 1.10 area, or thereabouts.

In light of the rate hike and hawkish commentary form the RBA, we would expect dips back to support level such as 1.10 to hold, and foresee further gains towards the prior years’ highs: In the previous edition of the Technical Tuesday, we had covered the Dow Jones, USD/CHF and copper. A week on, here are the before and after charts for those markets: 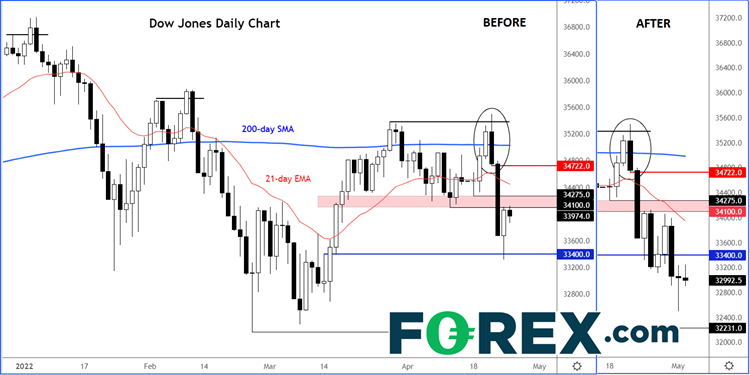 Source for all charts used in this article: StoneX and TradingView.com