Technical analysis on some of the most interesting markets right now

In this week’s edition, we are getting technical on the Dow, USD/CHF and copper. So, there’s something for everyone. Without further ado…

Like many other global indices, the Dow reversed sharply last Thursday as concerns over weakening Chinese demand amid the covid-linked lockdowns there added to fears over global stagflation and monetary tightening. The index fell after it failed to hold above its 200-day moving average, creating a large bearish engulfing candle in the process, which correctly signalled that more losses would be on the way as we found out on Friday when it declined more than 3 percent.

As a result of that sell-off, the Dow has now formed a lower low as it took out the prior April low of 34100 and prior support around 34275. The area between these levels now represents the first line of defence for the bears, followed by the base of the breakdown around 34720ish. 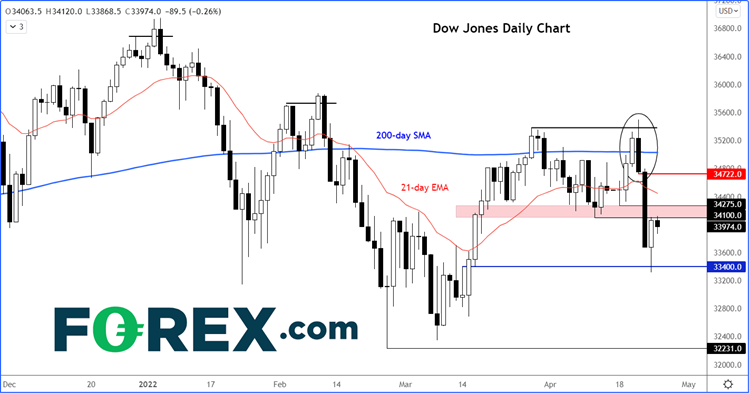 On the downside, the first level of support around 33400 has been tested on Monday when the market bounced strongly from there. But the damage might have already been done and Monday’s bounce could get faded into as the index now tests the abovementioned former support levels, which could turn into resistance. 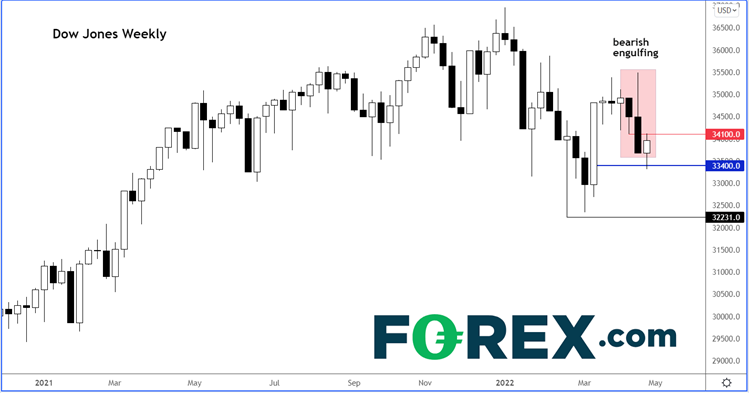 The big bearish engulfing candle from last week might encourage the bears to step in on this rebound and drive the index lower.

The USD/CHF last week made a higher high as it took out the 2021 peak at 0.9472. Previously, it had broken a bearish trend line several weeks ago. The USD/CHF has been driven higher by a strong rally in US dollar thanks to the Fed turning increasingly hawkish. It is possible that many traders might have missed out on this rally. They will be hoping that we might see some further weakness for stock markets in order to boost the appeal of the safe-haven Swiss franc to the point that it causes the USD/CHF to dip back down to the former breakout area circa 0.9440-0.9470ish. This area is where we may then see dip buyers step back in to drive the USD/CHF further higher. 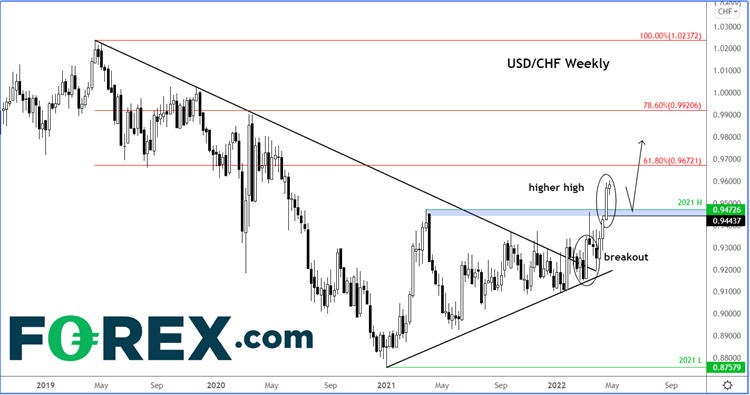 Alternatively, if the USD/CHF does not pullback as we have outlined above, bullish traders could zoom in to a smaller time frame and look for alternative trade ideas – for example breakout from a short-term consolidation pattern.

Concerns over Chinese demand saw the price of copper collapse on Monday as it took out the bullish trend line, which must have triggered follow-up technical selling as bulls’ stops were tripped. The metal has now paused its selling with the bulls attempting to defend their ground around the 200-day moving average, which was being tested at the time of writing. But with key support in the $4.500 region breaking, the bears have now got some confirmation to suggest that we have possibly seen the high, at least for a while. From here, an eventual drop to $4.00 cannot be ruled. There will be some interim support levels to watch for a potential bounce, for example the 200-day average at $4.430 or the head of the doji candle from January 31 further lower around $4.348. But so long as that $4.500 area holds as resistance now, the path of least resistance would be to the downside. 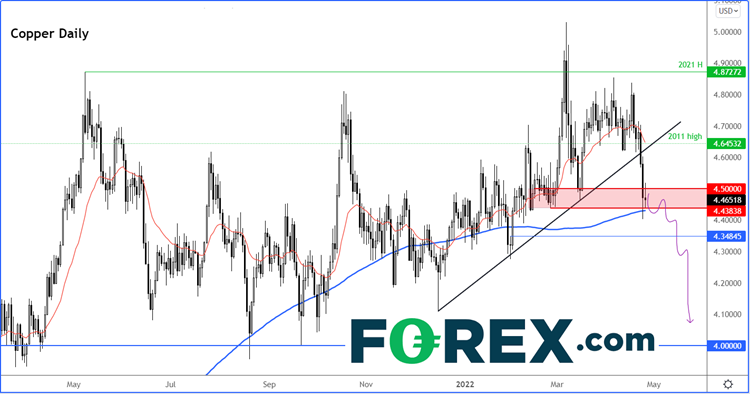